India has promised to spend more in the upcoming financial year to keep the engines of its economy running but with no direct handouts for the millions of poor.

On Tuesday, Finance Minister Nirmala Sitharaman outlined plans to spend 39.45 trillion rupees ($529.7bn) for the coming fiscal year that starts on April 1, up from 37.7 trillion rupees ($515.5bn) a year ago, where she promised to step up investments in building highways and railways but did not offer any direct giveaways for the poor or the middle class to spur consumption.

“It’s an investment-oriented budget but there’s not much on consumption,” Madan Sabnavis, chief economist at Bank of Baroda, told Al Jazeera. “There’s an investment approach to growth … and there’s nothing for households, despite two successive years of high inflation.”

And while the big-ticket investments in infrastructure, like roads and ports, will no doubt help boost those sectors, and ultimately the economy, there needs to be an increase in private sector investment for long term growth “but that happens only when consumption increases,” warns Sabnavis.

“What the economy needs right now is demand boost,” says Devendra Pant, chief economist at India Ratings & Research, a Fitch unit. “Has the budget been able to give that kind of boost to demand, especially for the rural areas that are struggling with weak demand …? Chances are very less.”

In her speech, Sitharaman said despite being in the midst of an Omicron wave, India was “in a strong position to withstand challenges”, citing an economic growth of 9.2 percent that it is expected to clock in the current financial year which ends in March, and which is the highest among all big economies. For the next financial year, the government expects the economy to grow at a slightly lower rate of 8 to 8.5 percent.

However, at the same time, the government’s projections for revenue from taxes – a main source of income – for the next year is up a modest 9.6 percent from the current year, points out Rahul Bajoria, chief India economist at Barclays. “They’re not being very optimistic of the state of the economy” as they don’t expect a repeat of this year’s high tax mop-up, he says.

‘No curbs in investment’

One of the biggest areas of the government’s push is on infrastructure and it plans to spend 200 billion rupees ($2.68bn) to expand highways and aims to manufacture 400 new trains over the next three years. Total government spending will be 4.6 percent more than the current year.

The point here, says Jagannarayan Padmanabhan, director at rating agency CRISIL, is that “there are no curbs in investment”. 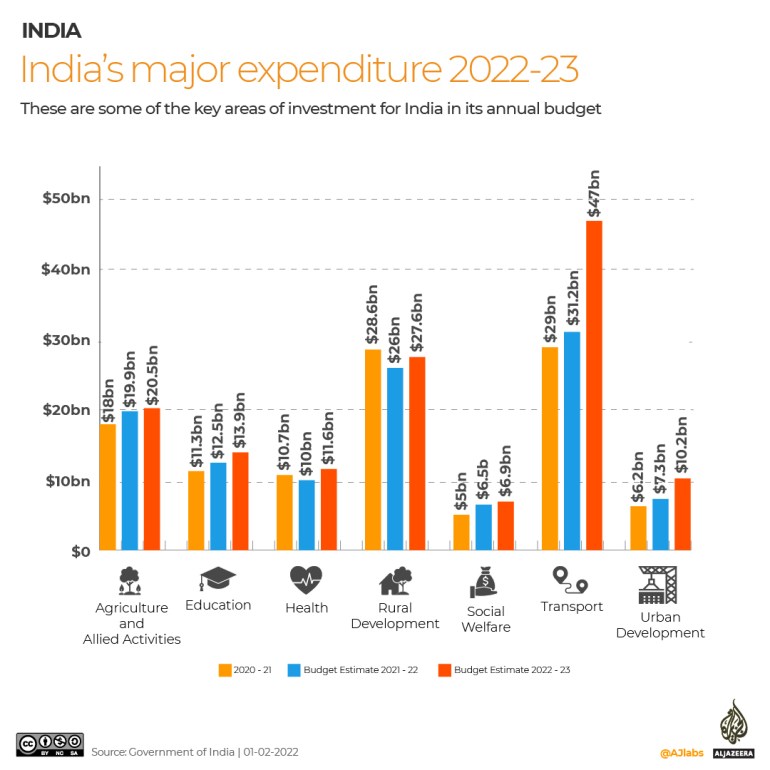 The government is bringing its infrastructure investment push under a master plan called GatiShakti, a term in Hindi for speed and power, which will be a single point of reference for all infrastructure development to avoid duplications across ministries, says Padmanabhan. “If a company builds a port, it’s easy to build roads leading to it but the railways [that is needed for speedy movement of goods] never come. Now there’s a proper effort to get that through,” he added.

Sitharaman cited GatiShakti and said it was “a transformative approach” to power economic growth and was driven by seven engines, including roads, railways, airports, ports, mass transport, waterways, and logistics infrastructure. “All seven engines will pull forward the economy in unison,” she said and will be helped along with energy transmission, IT communication, bulk water and sewerage, and social infrastructure, with an ultimate goal of creating jobs, especially for the youth.

Sitharaman also announced that the government will fund research and development in “sunrise opportunities” such as geospatial systems and drones, space economy and clean mobility solutions. The government, she said, was considering bringing in a  battery swapping policy and was planning to set up interoperability standards and the private sector “will be encouraged to develop sustainable and innovative business models for ‘Battery or Energy as a Service’”, she said without explaining further.

“A battery swapping policy could be a big booster for all the startups already working in this space,” Rajeev Singh, partner and automotive lead at Deloitte India, said. As well as helping to spur electric vehicle (EV) adoption, it could “also help drive electrification of fleets, especially for last-mile connectivity”, he said.

Sitharaman’s announcement buoyed shares of battery makers, with Exide Industries Ltd rising as much as 2.9 percent and Amara Raja Batteries Ltd climbing as much as 2.4 percent.

India also took a step closer to adopting cryptocurrencies and will launch its own digital currency in the upcoming financial year, Sitharaman said. The nation also plans to tax the income from the transfer of virtual assets at 30 percent, she said, effectively removing uncertainties about the legal status of such transactions.