The Venezuelan bolivar, after years of excruciating, relentless declines that have left it almost worthless and sunk millions into deep poverty, appears to have finally bottomed out.

The currency has traded at a rate of around 4.5 per dollar for the past four months, a newfound stability that’s come without much need for propping up by policy makers.

It’s a moment that at times seemed would never come as inflation spiraled out of control, the government kept slashing zeros from the bolivar – six just came off in October – and the economy plunged deeper into chaos. But a handful of forces have come together to brake the collapse – at least for now.

It starts with oil, which is generating more and more hard currency for the country as international prices spike and local output grinds higher following a decade of declines. Gold mining is also bringing in dollars as are a handful of small, but growing export industries – shrimp farming, rum and cocoa – that have popped up in recent years. And the socialist regime has, to the surprise of many, taken a largely orthodox approach to reining in fiscal spending and freeing up an economy that had long been throttled by government controls and red-tape. The economy expanded for the first time in seven years in 2021.

For many Venezuelans, the currency’s stabilization comes too late.

Millions have fled the country and millions of those who stayed behind have given up on the bolivar and adopted the dollar as their currency. They receive their salaries and pay for almost everything in dollars. But many of the poorest Venezuelans continue to get paid in bolivars, and for them, the currency’s strength has helped preserve the little purchasing power they have left. Inflation in bolivars has slowed to an annual pace of 53% in the past three months, down from well north of 1,000% in recent years, according to a Bloomberg index.

Even local economists who have become accustomed to seeing President Nicolas Maduro’s government commit policy mistake after policy mistake acknowledge that this time feels a bit different. Asdrubal Oliveros, who runs financial analysis firm Ecoanalitica, puts it this way: The bolivar will start to slide against the dollar at some point but there won’t be the kind of mega-devaluation that has hammered the economy time and again in recent years.

Given how much of the economy is now conducted in dollars, Oliveros finds the outsize attention the government is putting on the bolivar to be misplaced, but, he says, “I wouldn’t call it an artificial policy. It’s real.”

It’s real because the central bank has been able to largely orchestrate this stability without having to draw down its already depleted foreign reserves. The increase in exports has provided the bank with enough hard currency to meet demand from banks. Last year, it sold around $1.5 billion of dollars and euros in the foreign-exchange market, according to government documents seen by Bloomberg. Meanwhile, reserves held steady around $6 billion, once deducting IMF funds that the government can’t access. 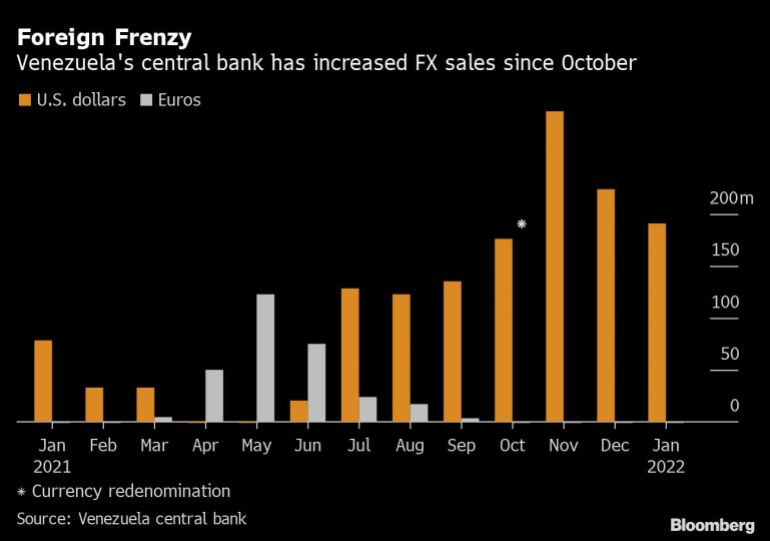 For now, the policy appears sustainable. State companies sold around $3.3 billion to the central bank in 2021, compared to only $743 million in 2020, according to government data shared during a call with investors last month and obtained by Bloomberg.

Still, risks abound. Inflows from oil production and other exports need to remain high if the central bank is to keep up the sales. And inflation, while easing, remains among the highest in the world, which will eventually put pressure on the currency.

Tamara Herrera, a Caracas-based economist at Sintesis Financiera, sees risks in trusting that the bolivar will hold steady in the long term, especially as oil prices and production fluctuate.

“The probability that the exchange rate will remain stable this year is relatively high,” she said.  “But that is an oversimplification of unforeseen events.”

There is one other factor that helps explain the bolivar’s stability: the collapse in demand for imports. Today, Venezuela is too poor — and the bolivar is too weak — to buy much abroad. Imports totaled less than $8 billion in 2021. Ten years earlier, that figure was $53 billion.