Federal Reserve policy makers could start to raise their target interest rate as soon as March and shrink the central bank’s balance sheet as a next step in response to surging inflation, Federal Reserve Bank of St. Louis President James Bullard said.

“The FOMC could begin increasing the policy rate as early as the March meeting in order to be in a better position to control inflation,” Bullard, referring to the Federal Open Market Committee, said in remarks prepared for delivery to the CFA Society St. Louis on Thursday. “Subsequent rate increases during 2022 could be pulled forward or pushed back depending on inflation developments.”

Bullard, who has recently been among the most hawkish policy makers, endorsed the policy committee’s pivot to fighting increasing prices at last month’s meeting. Fed policy makers believed a stronger economy and higher inflation could warrant rate hikes “sooner or at a faster pace” than they previously expected, according to minutes of the Dec. 14-15 policy meeting released Wednesday.

In December,  the FOMC announced it would wind down the Fed’s bond-buying program at a faster pace than first outlined at the previous meeting in early November, citing rising risks from inflation, at a pace that ends purchases in March. The meeting also included discussion of reducing the balance sheet by not reinvesting maturing securities, though no decisions on timing were made. 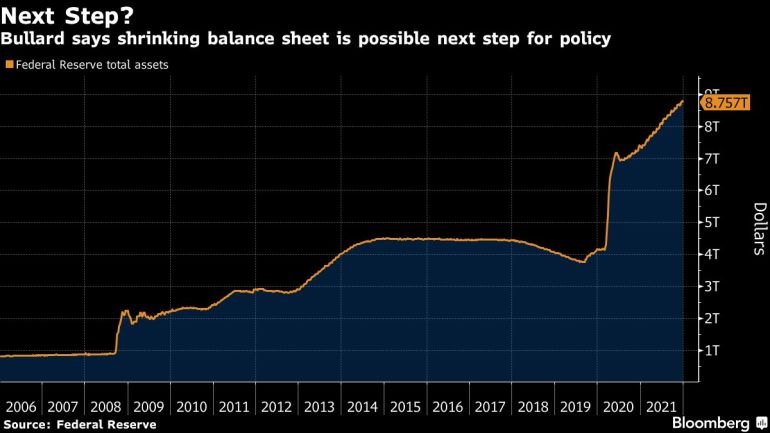 “Asset purchases will come to an end in the months ahead, but the FOMC could also elect to allow passive balance-sheet runoff in order to reduce monetary accommodation at an appropriate pace,” Bullard said, describing the balance sheet move as among the “possible next steps” for policy.

Bullard’s comments were more hawkish than those of San Francisco Fed President Mary Daly, who in a separate event said she favored the acceleration of tapering but gave no opinion on shrinking the balance sheet afterwards. “That’s a very different conversation than reducing our balance sheet; that would come after we’ve already begun to normalize the Fed funds rate,” she said.

Bullard, who votes on monetary policy this year, said the committee was responding to an “inflation shock,” with price rises at the highest level in several decades, and drastically higher than policy makers had expected a year ago.

Bullard gave an upbeat view of the U.S. economic outlook, saying he is looking for growth “at an above-trend rate” as the economy has responded to fiscal and monetary support. He suggested he didn’t see too much risk from the omicron variant, noting that confirmed cases in South Africa have peaked and are falling and the U.S. may follow that pattern.

The St. Louis Fed official has sometimes been a bellwether for the Fed, and was the first policy maker to suggest that tapering of bond buying should be accelerated and wrapped up by March in order to give officials flexibility to raise interest rates earlier than they had planned.

–With assistance from Olivia Rockeman.