The U.S. became the world’s No. 1 exporter of liquefied natural gas for the first time ever last month, as deliveries surged to energy-starved Europe.

Output from American facilities edged above Qatar in December after a jump in exports from the Sabine Pass and Freeport facilities, according to ship-tracking data compiled by Bloomberg. Cheniere Energy Inc. said last month that a new production unit at its Sabine Pass plant in Louisiana produced its first cargo. 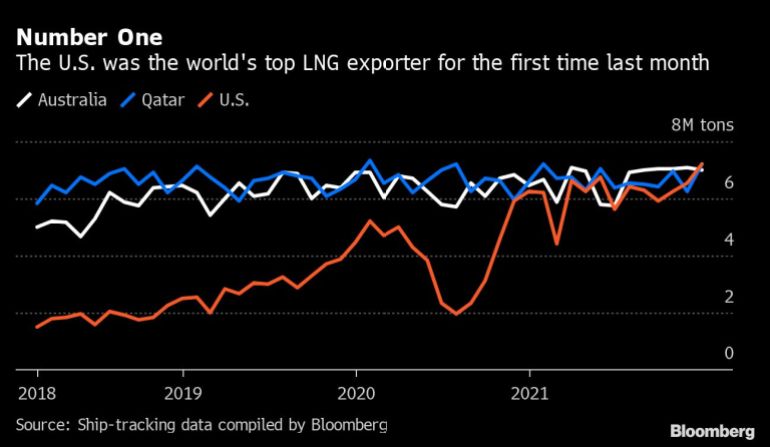 A shale gas revolution, coupled with billions of dollars of investments in liquefaction facilities, transformed the U.S. from a net LNG importer to a top exporter in less than a decade. Gas production has surged by roughly 70% from 2010 and the nation is expected to have the world’s largest export capacity by the end of 2022 once Venture Global LNG’s Calcasieu Pass terminal comes online.

But the U.S.’s position as top LNG shipper may be short-lived. Exports were just a hair above those from Qatar and Australia, and any production issues could affect the rankings. Looking further out, Qatar is planning a gargantuan export project that will come online in the late 2020s, which could cement the middle eastern nation as the top supplier of the fuel.

“Qatar and the U.S. will be vying for being the largest LNG producers in the world over the next decade,” said Muqsit Ashraf, senior managing director of Accenture’s global energy practice.

In the meantime, the jump in U.S. LNG exports will help ease a global supply crunch. Europe is facing a winter energy crisis as utilities grapple with seasonally low natural gas inventories. Overseas buyers purchased 13% of U.S. gas production in December, a seven-fold increase from five years earlier when most of the infrastructure required to ship the fuel out of the country didn’t yet exist.

U.S. LNG export terminals sent out a record 1,043 cargoes in 2021, with Asian nations making up nearly half of the destinations and Europe making up one-third, ship tracking data compiled by Bloomberg shows.