Ambani, Asia’s richest man who has built his fortune on fossil fuels, announced plans earlier this month to invest $75 billion in renewables infrastructure including generation plants, solar panels and electrolyzers. There is growing speculation that the strategy entails transforming all of that clean power into hydrogen, one of the largest endorsements in the next-generation fuel.

Analysts say Reliance is likely to opt for hydrogen in a bid to avoid India’s wholesale electricity market, which is dominated by financially stressed utilities and plagued by delayed payments.

“Reliance is preparing itself to capture the entire value chain of the green hydrogen economy,” said Gagan Sidhu, director at the Centre for Energy Finance at New Delhi-based think tank CEEW. “They clearly have seen the writing on the wall.”

Green hydrogen — made from water and clean electricity — is seen as crucial for the world’s emissions reduction goals, helping consumers and key industries such as steel transition to lower-carbon fuels. Prime Minister Narendra Modi last year announced a plan to make India, the world’s third-biggest emitter of greenhouse gases and a major energy importer, into a global hub for production and export of the fuel.

While Reliance hasn’t broken out how much will be devoted to hydrogen, the $75 billion investment in clean energy is by far the biggest in the country. Other companies such as Adani Enterprises Ltd. and state-run energy firms NTPC Ltd. and Indian Oil Corp. also have set plans for green hydrogen.

The number of countries with a hydrogen strategy doubled last year to 26, and expected plans from the U.S., Brazil, India and China could reshape the global market, according to BloombergNEF. But the sector is still experimental and far from commercially viable. India is relying on the country’s billionaires, including Ambani and his rival Gautam Adani, to lead the way. 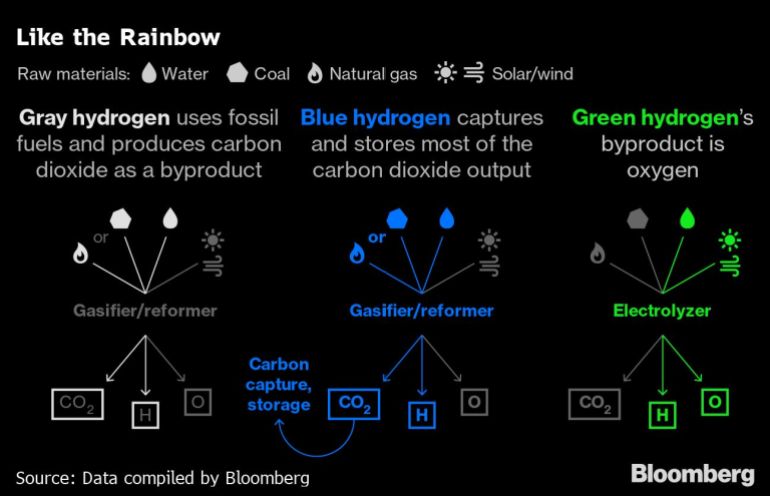 A key challenge will be to produce it at affordable costs. Green hydrogen produced by renewables is far from competitive compared to other fuels, costing nearly double the price using coal, India’s main source of electricity generation.

Ambani has vowed to produce green hydrogen at $1 per kilogram, a more than 60% reduction from today’s costs. “Reliance will aggressively pursue this target and achieve it well before the turn of this decade,” Ambani said last year.

Reaching a $1 price point will require a dramatic drop in the cost of electrolyzers, the equipment needed to make green hydrogen, according to Debasish Mishra, a Mumbai-based partner at Deloitte Touche Tohmatsu.

In addition, a capacity utilization of more than 80% will be required, and that should be powered by constant energy supplies at less than 3 cents per kilowatt-hour, Mishra said. To achieve around-the-clock supplies, supplemental forms of energy such as storage or hydropower will be needed, and that can take the cost beyond the desired levels.

Ambani may also be hoping for government support.

“No one knows if we can get there,” said R. Ramachandran, a former director for refineries at state-run Bharat Petroleum Corp. “If Reliance succeeds, then there is good opportunity. If it doesn’t, then there may be a need for some government subsidies” or other forms of official support.

India plans to unveil its first green hydrogen policy in about 10 days, laying out incentives to draw investment in the sector, Power Minister Raj Kumar Singh said at a virtual seminar on Thursday.

The nation wants to offer free transmission of clean power from one province to another for making hydrogen, and make land available for building renewable energy projects as well as facilities to store green hydrogen and green ammonia, the minister said.

Reliance, which aims to turn net zero by 2035, said it plans to produce 100 gigawatts of renewable energy, a fifth of the nation’s target for non-fossil capacity by the end of the decade.

The company said it’s looking at sites in Gujarat and has made a request to the state government for 450,000 acres in Kutch, a white sand desert on India’s western coast and a favored destination for renewable energy in the country.

“Reliance has correctly identified areas where they can be cost competitive: green hydrogen and solar,” said Julio Friedmann, senior research scholar at the Center on Global Energy Policy at Columbia University. “They have identified their end game and are making investments to position themselves for market share and growth.”