By Baris Balci and Cagan KocBloomberg

Turkish inflation surged to a 19-year high in December, propelled by a slump in the lira and President Recep Tayyip Erdogan’s push for cheaper borrowing.

The annual consumer inflation rate rose to 36.08% last month, the highest since September 2002 and up sharply from 21.31% in November. The figure far exceeded the 27.36% median estimate in a Bloomberg survey of 19 analysts.

Turkey’s central bank has slashed its benchmark interest rate by 500 basis points since September in a series of moves encouraged by Erdogan, who has attacked elevated borrowing costs as a challenge for businesses and a brake on economic growth. The cuts have sent the lira into a tailspin that’s fueled consumer price rises.

The lira recovered some of its losses in December after Erdogan introduced a mechanism that promises to compensate holders of the lira when the currency weakens to a certain level. However, the currency remains about 31% weaker than it was on Sept. 23, when the central bank started cutting interest rates. 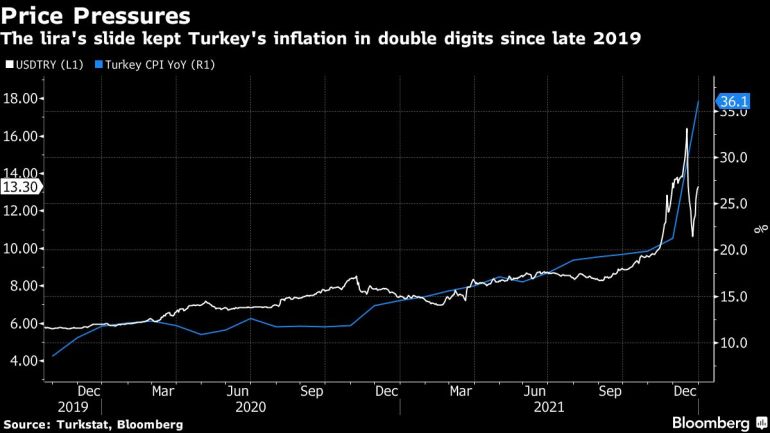 The decision to slash five percentage points off the central bank’s benchmark rate led to an around 44% slide in the lira last year, making it the worst among all major currencies tracked by Bloomberg. The currency also weakened after the December inflation report and was trading 2.3% lower as of 10:30 a.m. local time.

“We expect the headline inflation to accelerate until May-June,” said Ozlem Bayraktar Goksen, Istanbul-based chief economist at Tacirler Yatirim. “We don’t see a change in policy rate in the first quarter in line with the central bank’s guidance.”

Below are more details from the data: 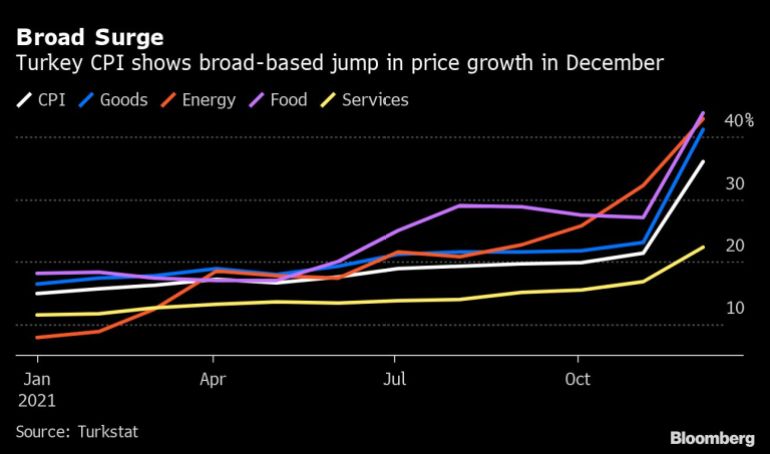 Though rising inflation has hurt Erdogan’s popularity ahead of the 2023 election, he’s insisted he will push on with a policy shift he said aims to boost manufacturing and exports and reduce the influence of international markets on Turkish monetary policy.

The central bank expects inflation to follow a volatile course though it expects its looser monetary stance will see inflation resume its downward trend “once temporary effects disappear.”

The bank has repeatedly said that transient factors rather than lower interest rates are behind the latest surge in prices. Turkey’s monthly inflation will begin to slow in January as the lira stabilizes and the government cracks down on unjustified price increases, Finance Minister Nureddin Nebati said on Wednesday in a televised interview.

The central bank will hold its next rate-setting meeting on Jan. 20. and publish its first inflation report of the year on Jan. 27.