There are few things scarier for investors than a bear market — unless you’re involved in crypto, in which case a winter is worse.

The chilling term refers to a sharp slump, followed by a drop-off in trading and months of market doldrums — a phenomenon that memorably befell the crypto market in 2018. Bitcoin’s price plunged by more than 80% to as low as $3,100 from the end of 2017 through December of the following year, a period characterized by the boom-and-bust of initial coin offerings and several big banks shelving their plans to start cryptocurrency trading desks. Bitcoin wouldn’t reach a new high until December 2020, according to data compiled by Bloomberg.

Memories of 2018 are sparking fears that a repeat is playing out now after the world’s largest cryptocurrency plummeted 50% from its most recent high of almost $69,000 in November. The crypto universe has shed more than $1 trillion in market value on growing conviction that the Federal Reserve is set to start ratcheting back the ultra-accommodative policy settings that fueled a boom in risk assets. The pullback has hit all corners of the crypto ecosystem, from Bitcoin to memecoins and publicly listed crypto exchanges. While the collapse has been rattling enough on its own, it has spawned an even bigger concern that the pain may persist for many months, according to UBS.

“There’s this question of how do we characterize that and the nearest analogy is probably 2018, which is this idea of a crypto winter,” James Malcolm, head of foreign exchange research at UBS, said by phone. “It looks likely to be a fairly difficult and potentially prolonged period and therefore, the crypto winter analogy is quite good. Remember, the crypto winter in 2018 wasn’t just over the Northern Hemisphere winter months. It basically extended for a whole year — so it was a crypto winter that lasted effectively a year.” 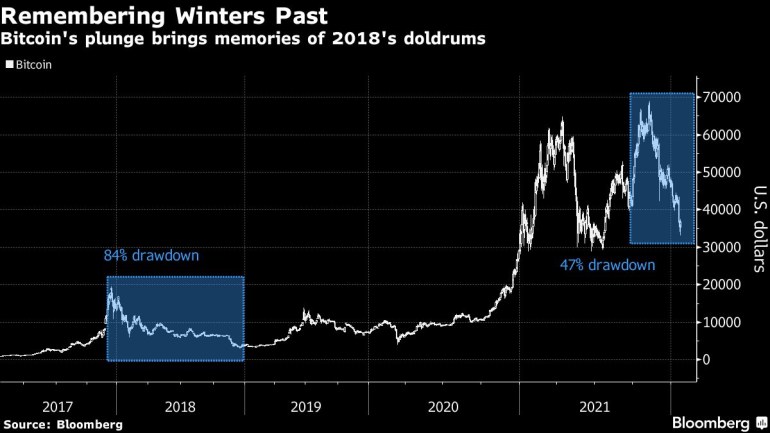 Bitcoin on Tuesday continued to decline, falling as much as 3% to trade at $35,721. The coin has spent more than 60% of the year so far trading lower, posting only nine sessions in the green.

Mentions of “crypto winter” and “crypto ice age” have flooded social media amid the latest drop. “Gm gm — make sure you stay warm, crypto winter is in full force,” Twitter user @brycent_ posted on Monday, using the crypto shorthand for “good morning” to start his tweet. “Enjoy this #bitcoin winter,” user @mir_btc tweeted over the weekend.

To Antoni Trenchev, co-founder and managing partner at Nexo, there’s a definite chill in the air. Bitcoin has already satisfied half of his two-part crypto-winter definition: a sharp decline in prices.

“I’m not looking for a re-run of the last ‘crypto winter,’” he said. “Undeniably, there are regulatory and macro storms ahead, and another leg down to $28,000-$30,000 can’t be ruled out in the current risk-off climate.”

Unlike the winter of three years ago, investment in the crypto-sphere remains robust — at least for now. In January alone, crypto-exchange FTX announced the launch of a $2 billion venture fund to target Web3 opportunities, while the Financial Times reported that Andreessen Horowitz is looking to raise $4.5 billion for crypto funds. Of course, a prolonged slump could douse enthusiasm for the sector.

Outside of venture capital, companies are also looking to expand into corners of the crypto ecosystem. Filings with the U.S. Patent and Trademark Office show that Walmart Inc. is preparing to create its own cryptocurrency and non-fungible tokens. Meanwhile, GameStop Corp. reportedly is also planning to launch an NFT marketplace for gamers by the end of the year.

To Tacen Inc.’s Budd White, that momentum is a sign that the crypto complex is in the midst of repricing, rather than a freeze.

“I don’t believe we are entering a crypto winter because there is still increasing momentum on the build-side — we are just seeing more realistic pricing of what is currently built,” said White, chief product officer and co-founder at the software development company that builds open-source, blockchain-based software.

The looming threat of intensified regulatory action adds to the risks embedded in the crypto complex. The Fed is considering the launch of its own digital currency, while crypto mining’s energy use has attracted scrutiny from the U.S. Congress and foreign governments.

“The White House may soon unveil some national security challenges posed by cryptocurrencies and the Fed’s paper on central bank digital currencies didn’t answer any questions on if we will see a digital dollar or how they could work with stablecoins,” said Edward Moya, a senior market analyst at Oanda Corp. “The regulatory environment got a lot cloudier now.”