By Rachel Morison and Todd GillespieBloomberg

Three more U.K. energy companies were pushed out of business by sky-high natural gas prices, bringing to more than 1.7 million the number of customers who have lost their supplier and adding to pressure on the government to step in.

Igloo Energy Supply Ltd., Enstroga Ltd. and Symbio Energy Ltd. announced their collapse on Wednesday, representing a total of about 233,000 households. Those customers will be allocated another supplier by energy regulator Ofgem. Since the start of August, 10 utilities in the country have gone under.

The latest failures increase the chances that government intervention will be needed. The crisis is building even before the start of winter, when power and gas prices typically increase due to demand for heating. Rising costs are making it difficult for larger suppliers – which have already taken on thousands of additional clients – to absorb even more, absent government support.

Benchmark natural gas prices in the U.K. rose 10% to a new record on Wednesday. September has been the most expensive month for power prices in the country in records dating back to 2010. 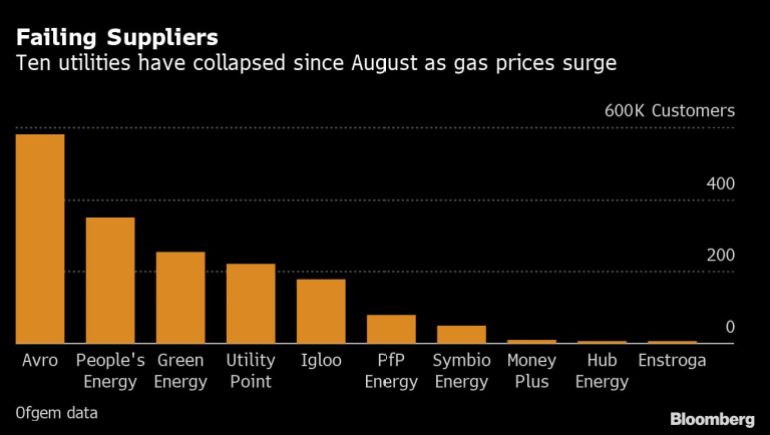 “The current extreme price shock that we’re experiencing is one that few, if anyone, anticipated,” according to a statement from Igloo, which has about 179,000 customers. It said that “incredibly high gas prices” created a retail market that is no longer sustainable for the company.

All three providers that announced their collapse advised customers not to worry, noting that supplies are secure and that a new energy provider will be appointed soon. Symbio Energy has about 48,000 U.K. customers, and Enstroga has 6,000. Together the three suppliers represent less than 1% of domestic customers in the market, according to Ofgem. 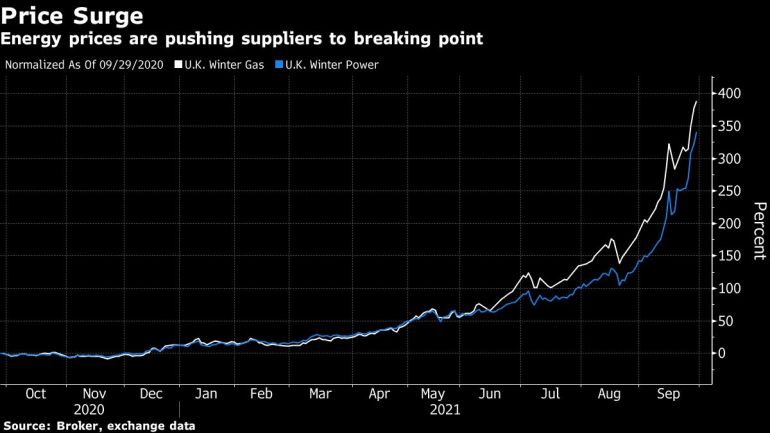 Both Ofgem and U.K. Business Secretary Kwasi Kwarteng have warned that they expect more suppliers to go bust this winter. Kwarteng said last week that the government has the option to appoint a special administrator if needed. When asked about the potential for state-backed loans for suppliers, he said the current strategy of redistributing accounts is working.

(Updates with details on larger suppliers from third paragraph.)