Pakistan only started importing liquefied natural gas six years ago, but its growing dependence on the super-chilled fuel is starting to turn into a nightmare.

The surge in global gas prices due to shortages in Europe has pushed Asian LNG to records for the time of year. That’s forced Pakistan to pay the most ever for spot shipments to top up supply under long-term contracts, or even forgo them altogether.

The shortfall means the nation will “definitely” suffer power outages over the winter, Iqbal Z. Ahmed, the chairman of Pakistan GasPort, which owns and operates one of the nation’s import terminals, said in an interview. “It will hit exports, industry and general morale more than anything else. Electricity is not a luxury.”

Pakistan’s Ministry of Energy did not respond to multiple requests for comment. 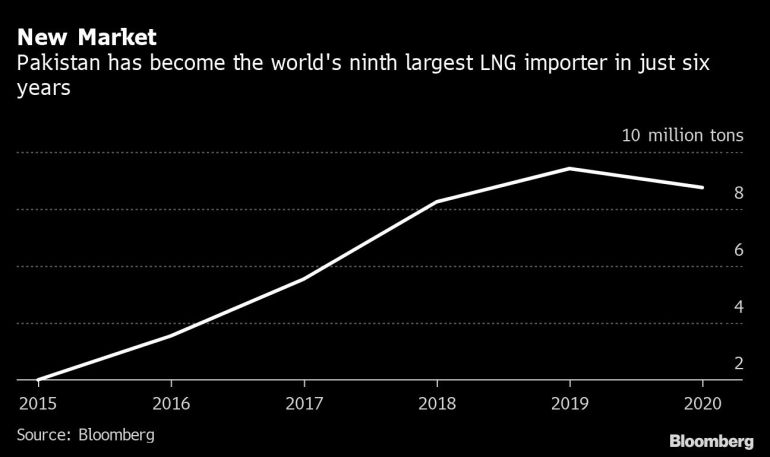 The energy crisis playing out from the U.K. to China is bound to also roil emerging markets, which are already struggling to bankroll the sky-high fuel prices. Economies that can’t afford the fuel may simply grind to a halt when winter in the northern hemisphere boosts heating demand and sends spot prices even higher.

Over the last decade, emerging nations including Pakistan built LNG import strategies on the premise that the fuel would be abundant and cheap for the foreseeable future, as it was during the past several years. That came to a halt this year as Asian LNG rates soared.

Pakistan does get more than half its LNG under long-term contracts, which provides some protection against the volatile spot market. Furthermore, Qatar has agreed to increase supply under those term deals, according to traders who asked not to be identified as the talks aren’t public.

But the nation still requires spot shipments through the winter months, and it is unclear if it will be able to afford those. The high cost of spot LNG has sparked a political controversy, with opposition politicians demanding an inquiry into purchases by the state-owned importer.

The high costs may also push the government to encourage consumers to switch to electricity where possible to save gas for industry and heating needs. They also threaten the nation’s switch to gas as a cleaner-burning transport fuel.

LNG spot price levels are “crazy,” Iqbal said. “If this sort of trend continues it will be self-defeating for the LNG business because people will start switching back to other fuels.”