Brent oil roared above $80 a barrel on signs that demand is running ahead of supply, depleting inventories amid a global energy crunch.

The leading crude benchmark rose for a sixth day to hit the highest since October 2018, while West Texas Intermediate extended gains. Oil’s latest upswing has come with a flurry of bullish price predictions from banks and traders, further gains in natural gas, and speculation that the energy industry isn’t investing enough in fossil fuels to keep supplies at current levels. 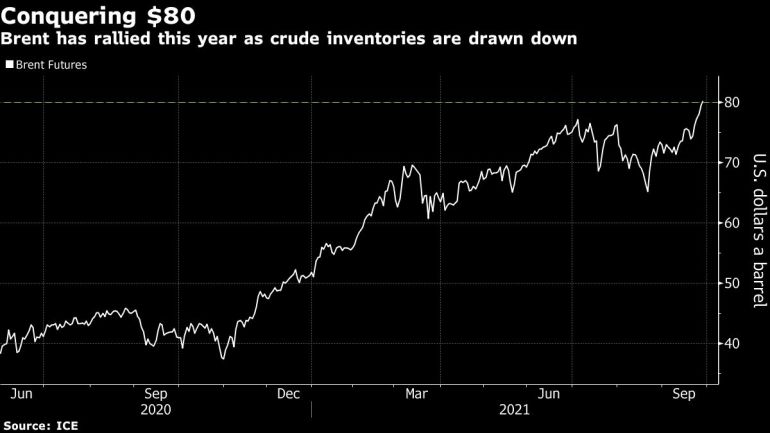 Oil has rallied this year as the roll-out of vaccines to combat the pandemic aids energy demand, spurring a drop in U.S. inventories. A dramatic surge in natural gas has stoked bets that crude will benefit from spillover demand as users seek alternatives. Trafigura Group, one of the world’s largest commodity trading houses, is among those that are forecasting higher oil prices.

“It looks like the oil rally has still got some legs,” said John Driscoll, chief strategist at JTD Energy Services Pte. “Fundamentals are still pretty convincing, demand is recovering, backwardation is increasing. I just don’t see any evidence yet that the rally has topped out.”

While worldwide demand has increased, the Organization of Petroleum Exporting Countries and its allies including Russia have been easing supply curbs with great caution. Later Tuesday, OPEC will release its World Oil Outlook, which will detail the group’s views on market fundamentals.

Inventory draws are the “largest on record” and OPEC+ can’t restore the market’s balance, Goldman Sachs Group Inc. said in a note earlier this week. The deficit “will not be reversed in coming months, in our view, as its scale will overwhelm both the willingness and ability of OPEC+ to ramp up,” it said.

Global oil consumption is expected to return to pre-pandemic levels in the third quarter of 2022, according to BP Plc. Demand is expected to see an average gain of 3.8 million barrels a day on-year, President of BP Singapore Eugene Leong said in an interview.

Oil’s timespreads have widened, signaling traders are more positive. Brent’s prompt spread was 80 cents a barrel in backwardation, from 63 cents two weeks ago. That’s bullish, with near-dated prices above those further out.