By Lars Paulsson and Verity Ratcliffe and Jesper Starn

European energy markets from natural gas to carbon permits jumped to records, signaling the supply shortage will get worse just as the winter season starts.

Stockpiles of everything from gas to coal and Norwegian water for electricity production are dwindling and there are few signs the situation will improve anytime soon as demand continues to roar back from a pandemic-driven lull. 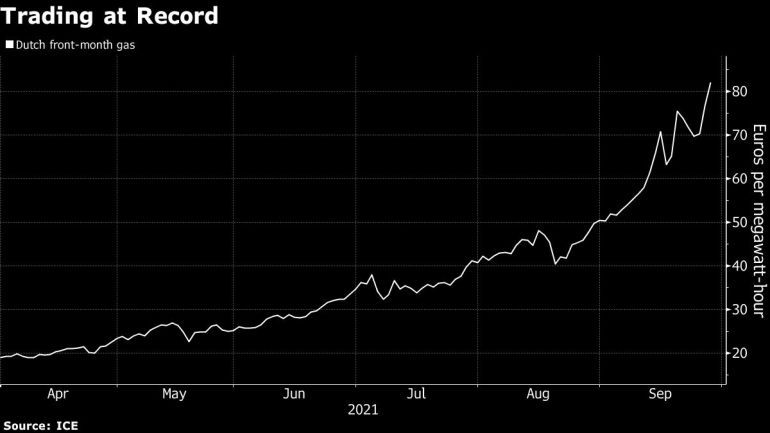 Many of the U.K.’s smaller energy suppliers have collapsed, while some French electricity retailers are struggling to supply clients and are also at risk of folding. Meanwhile, Europe’s miners have warned that the unprecedented prices could disrupt their shift away from fossil fuels.

Dutch front-month natural gas futures surged as much as 12% and the equivalent contract in the U.K. jumped at the same rate. German electricity for next year also climbed to new highs, while carbon futures eased after earlier jumping to a record high. Brent crude, the international benchmark, rose above $80 a barrel for the first time since October 2018 and northwest European coal prices were at their highest since the 2008 financial crisis.

The surge in energy prices will be taken up by European leaders themselves, when they meet in Brussels for a summit on Oct. 21-22, according to a draft of the meeting’s agenda seen by Bloomberg.

“This is the first innings of a multiyear, potentially decade-long commodity supercycle,” Jeff Currie, global head of commodities research at Goldman Sachs Group Inc., said in an interview with Bloomberg TV. “It’s driven by the war on climate change, the war on income inequality. All of these dynamics lead to a structural rise in commodity demand against this whole idea of the revenge of the old economy.”

The latest warning that the power crunch is spreading across Europe comes from the Norwegian grid operator Statnett SF, which said electricity supplies in the southwest of the country are “pressed” because of low inflows and falling stockpiles.

The shortage could crimp exports to other markets since that part of the country is a hub for power shipments abroad. The U.K., which is grappling with a supply crisis of its own, plus Germany and Denmark are all connected to the Norwegian grid via long cables on the seabed.

“There is now a very low amount of water, for this time of year, in many of the reservoirs here,” Statnett said. 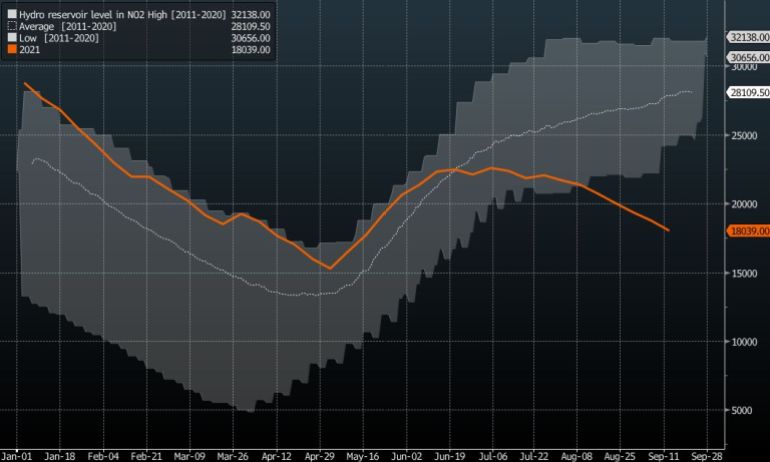 Europe has the world’s most ambitious climate plan, but political will is being tested by soaring energy costs. As countries take steps to ease the blow on consumers, Spain warned the European Union that measures to reduce emissions “may not stand a sustained period of abusive electricity prices,” according to a Sept. 20 letter.

Much of the rally in prices stems from the gas shortage, after a colder and longer winter depleted stockpiles. Inventories are now at their lowest in more than a decade for this time of the year. Under BNEF’s cold winter scenario, Europe’s storage levels at the end of March would be 2.5 billion cubic meters, or just 3.8% of full capacity, the researcher said. Low wind speeds have also meant that more of the fuel has been used to generate power.

Russian gas flows through a major transit route more than halved early Tuesday. While Gazprom PJSC has been focusing on refilling gas storage within Russia, the company says all its export-supply obligations have been met. The current drop in deliveries through the Yamal-Europe link is a “temporary situation” due to a client request, it said.

The chart below shows the German clean-dark spread for November, a measure of coal-plant profitability. It jumped as high as 49.43 euros ($57.73) per megawatt-hour and is driving demand for carbon permits.

As the region’s official heating season starts on Friday, traders are watching for signs of cold weather, which would push demand higher. There will also be a key gas auction in Ukraine on Oct. 18 to see how much fuel will come from Russia. Any signal from Gazprom on when significant gas flows will start on the controversial Nord Stream 2 pipeline to Germany will also likely impact the rally.

“It’s very difficult to make forecasts. Currently the gas market is extremely tight,” said Marco Saalfrank, head of continental Europe merchant trading at Swiss utility Axpo Holding AG. “It depends very much on what the winter will be like, if it’s a cold winter then we will probably see the gas price continue to spike.”