China banned all crypto transactions and vowed to root out mining of digital assets, delivering the toughest blow yet to the industry.

Crypto-related transactions will be considered illicit financial activity, including services provided by off-shore exchanges, the People’s Bank of China said on its website. It added that cryptocurrencies, including Bitcoin and Tether, are not fiat currency and cannot be circulated.

Chinese officials are going further to stamp out crypto trading for its ties to fraud, money laundering and excessive energy usage. China already has rules that bar banks from offering crypto-related services. To get around such rules, traders have moved to over-the-counter platforms and offshore exchanges.

“China’s ban on all cryptocurrency trading activity will have some short-term impact on the currency’s valuation, but long-term implications are likely to be muted,” said Ganesh Viswanath Natraj, an assistant professor of finance at Warwick Business School.

While there are probably still Chinese onshore speculators, activity has already shifted out of the country over the years, said Clara Medalie, the research lead at data provider Kaiko. 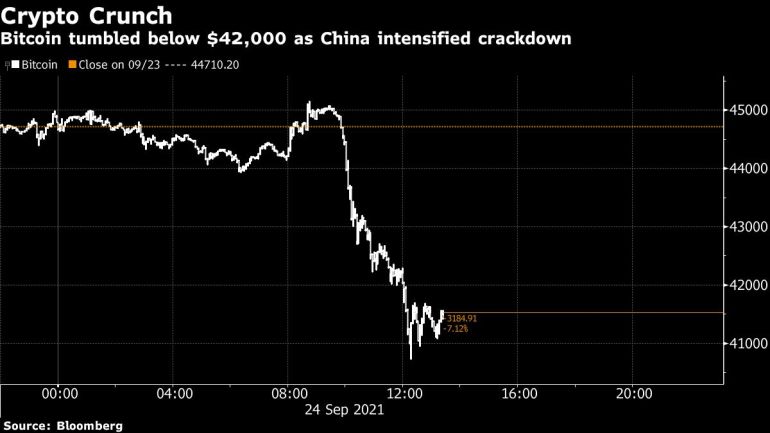 Crypto mining’s massive energy consumption is also part of the reason the industry is coming under scruntiny. In a separate statement, China’s economic planning agency said it’s an urgent task to root out crypto mining and the crackdown is important to meet carbon goals.

China is facing a severe power crisis that’s already roiled commodities from aluminum to steel, and several industries have seen their power supplies curbed in the last few weeks.

The country is home to a large concentration of the world’s crypto miners and as recently as April had a 46% share of the global hash rate, a measure of computing power used in mining and processing, according to the Cambridge Bitcoin Electricity Consumption Index.

“The Chinese regulators have always been extreme in their views and these comments are not new,” said Vijay Ayyar, head of Asia Pacific with cryptocurrency exchange Luno in Singapore.

“The interesting part is also why they continue making these statements. Its probably because they sense continued unabated activity in China and hence having to go on an overdrive,” he added.

China’s renewed crackdown against crypto mining and trading activity started in May. That was the first time top officials had singled out crypto mining at the national level since dropping it in 2019 from a proposed list of dirty industries to be eliminated.

The move caused a collapse in crypto prices, with Bitcoin losing about half its value between April and July this year. While the market has since recovered some ground, it’s still far below the all-time high of $63,000.