Turkey’s lira fell to a record low after the central bank cut its benchmark interest rate on Thursday, unleashing a new bout of market turbulence and reflecting the long shadow cast by President Recep Tayyip Erdogan over monetary policy.

The Monetary Policy Committee reduced its key one-week repo rate by 100 basis points to 18%. All but one of the 23 economists surveyed by Bloomberg predicted the central bank would keep rates unchanged at 19%.

Turkish inflation unexpectedly climbed to 19.25% last month, pushing the nation’s real interest rate below zero for the first time since October. But Governor Sahap Kavcioglu shifted the bank’s policy focus earlier this month to core inflation, which strips out volatile items like food and energy and is nearly 250 basis points lower than the headline figure, giving him room to heed Erdogan’s calls for lower interest rates.

Erdogan promised cheaper borrowing costs and slower inflation starting this month, and not delivering on that could have cost the central bank governor his job. Kavcioglu, who kept the benchmark unchanged for a fifth meeting last month, is the fourth governor of the central bank since 2019, with the president firing his three immediate predecessors. 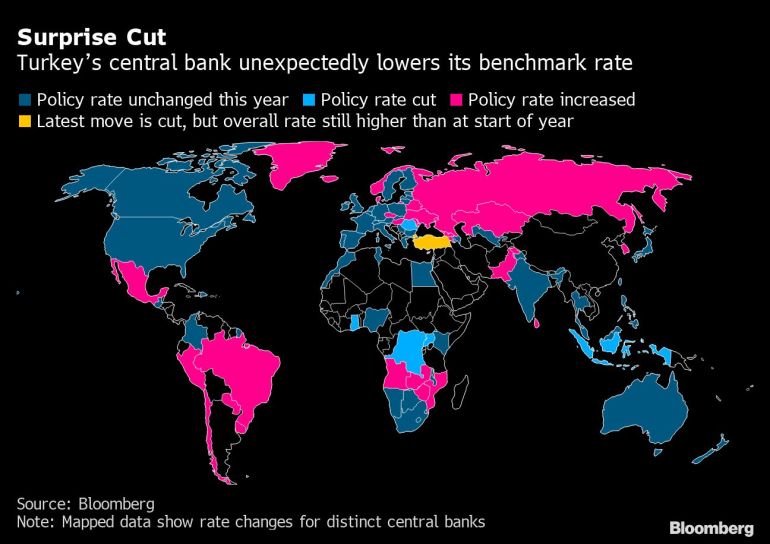 The central bank said the recent increase in inflation was due to transitory factors and removed a pledge to keep its benchmark rate above inflation and maintain tight monetary policy.

The bank also highlighted the importance of stripping out the impact of supply shocks on price increases, and focusing on “core inflation developments” in a statement accompanying the rate decision.

“The move is still shocking as the initial negative market reaction clearly indicates,” said Piotr Matys, a senior currency analyst at InTouch Capital Markets Ltd. “Starting easing cycle when headline inflation is on track to end this year well above the official forecast and justifying it with a slowdown in the core measures is a very risky move that could prove counterproductive as a weaker lira will have inflationary consequences,” he said. 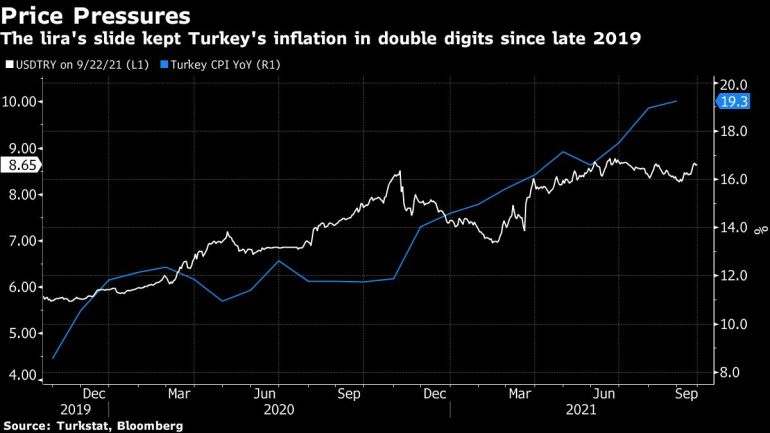 Erdogan, whose ruling AK Party has for decades based its electoral success on rapid levels of economic growth, preaches the unorthodox doctrine that higher interest rates spur prices rather than contain them. When the economy sank during the pandemic, support for Erdogan and his party fell.

What does political interference in monetary policy look like? It’s when inflation rises above the policy rate, growth hits a record high, peers embark on a tightening cycle -- but a central bank decides to cut interest rates because the president has demanded it.

The only analyst to predict a rate cut was Ibrahim Aksoy, the Istanbul-based chief economist at HSBC Asset Management Turkey. Aksoy, who ranks first among forecasters of Turkish rate decisions in two years of Bloomberg surveys, penciled in a rate cut of 50 basis points because of the governor’s recent emphasis on core and expected inflation. “In case of a surprise rate cut, the dollar/lira pair may test the record high level at 8.80,” he said before the decision. 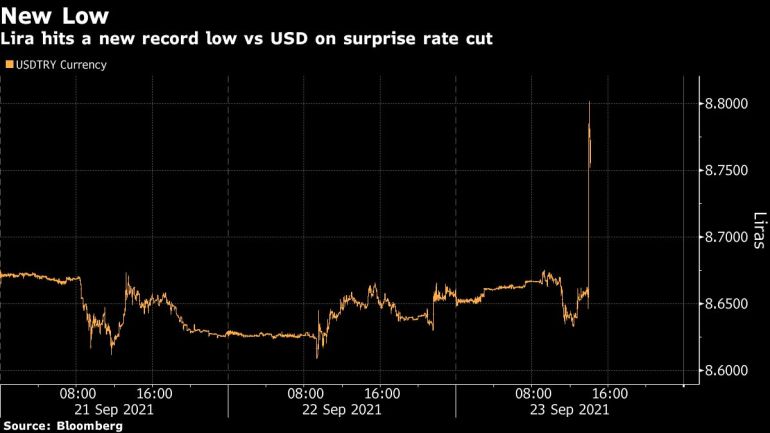 Cutting now risks further turbulence for the lira, which has already weakened more than 16% against the dollar since the governor took over on March 20. Investors frequently criticized the central bank for being too quick to undo tightening and too slow to respond to risks, most recently in August 2018 when the lira lost about a quarter of its value.

The Borsa Istanbul 100 Index reversed earlier gains to drop as much as 0.9% and was trading 0.4% lower as of 2:56 p.m. The yield on 10-year government bonds surged by the most since central bank’s previous governor was ousted on March 22.