China Evergrande Group missed interest payments due Monday to at least two of its largest bank creditors, taking the cash-strapped developer a step closer to one of the nation’s biggest debt restructurings.

Evergrande hadn’t made the payments as of late Tuesday local time, people familiar with the matter said, asking not to be identified discussing private information. Banks were expecting Evergrande to miss the deadline after China’s housing ministry told them the company would be unable to pay on time.

It’s unclear whether banks will formally declare Evergrande in default. Some are waiting for the developer to propose a loan extension plan before deciding on next steps, two people said. Evergrande’s next closely watched debt deadline comes on Thursday, when it’s due to pay interest on two bonds. 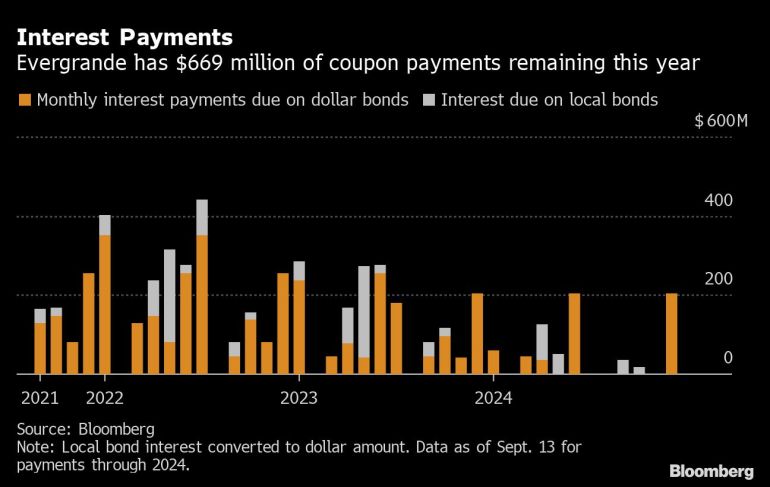 The property giant’s cash crunch has become a key focus for global investors. Risky assets plunged around the world on Monday amid fears that an Evergrande collapse might spark financial contagion and curb growth in the world’s second-largest economy.

While many China watchers predict Beijing will take steps to contain any fallout from Evergrande’s crisis, official silence on the company’s plight is unnerving investors. Authorities may give some signals about their willingness to reduce systemic stress on Wednesday, when the People’s Bank of China resumes daily open-market operations after a holiday break.

Evergrande, which has more than $300 billion of liabilities, didn’t immediately respond to an emailed request for comment outside of business hours.

Evergrande has borrowed about 572 billion yuan ($88.5 billion) from banks and other financial institutions including trusts, with nearly half due in less than a year, according to its latest financial statements. China Minsheng Banking Corp., Agricultural Bank of China Ltd. and Industrial & Commercial Bank of China Ltd. were among the company’s principal banks at the end of last year.