By Tian Chen and Tania ChenBloomberg

China injected more cash into its banking system in a sign authorities are seeking to avert a funding squeeze amid a seasonal rise in financing demand and the intensifying debt crisis at China Evergrande.

The People’s Bank of China added 90 billion yuan ($14 billion) of funds on a net basis through seven-day and 14-day reverse repurchase agreements on Friday, the most since February. Today was the first time this month it added more than 10 billion yuan short-term liquidity into the banking system on a single day.

The move comes as the trouble facing China Evergrande Group fuels investor concern over the health of real estate and credit markets. Adding to the stress is a seasonal spike in demand for cash as banks are hesitant to lend toward the end of the quarter ahead of regulatory checks. Liquidity also tends to diminish at this time of year ahead of a one-week holiday at the start of October. 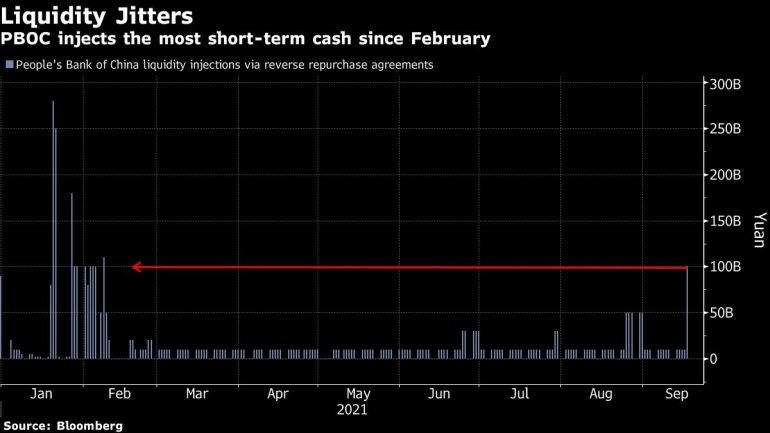 “Avoiding a systemic liquidity squeeze is the absolute priority for the PBOC and it has means to do so,” Societe Generale SA economists led by Wei Yao wrote in a research note.  “A Lehman-style financial-market meltdown is not our top concern, but an extended and severe economic slowdown seems more probable.”

Still, the PBOC’s operations have yet to push money-market rates lower. The seven-day repo rate, an indicator for interbank borrowing costs, jumped 14 basis points Friday to 2.4%, the highest since June 30.

Disquiet over Evergrande comes at a time when China’s economy is already slowing. Strict movement controls put in place to curb Covid-19 outbreaks have hurt retail spending and travel, while steps to cool property prices have also taken their toll. On Wednesday, the country reported a sharper-than-expected slowdown in retail sales in August, along with weaker growth in industrial production and fixed-asset investment.

The PBOC is seeking to strike a balance between stimulating the economy and making sure its cash injections don’t result in asset bubbles. Since July, it refrained from adding additional medium-term liquidity as policy loans come due.

“It’s fair to say that the Evergrande situation and its repercussions on the broader property market will have a far greater direct impact on Chinese growth than any of the other regulatory crackdowns,” said Alvin Tan, head of Asia foreign-exchange strategy at Royal Bank of Canada in Hong Kong. “I would not be surprised that the PBOC is acting to contain the fallout in the money markets.”

The uncertainty over Evergrande is spurring China watchers to game out potential worst-case scenarios as they contemplate how much pain the Communist Party is willing to tolerate. Pressure to intervene is growing as signs of financial contagion increase.

Numerous industries could be exposed to credit risks if Evergrande was to default, Fitch Ratings warned. It said smaller banks and vulnerable developers would be hurt the most. With more than $300 billion in liabilities, Evergrande’s liquidity stress is stoking worries over the broader Chinese property industry. Both Morgan Stanley and Goldman Sachs slashed forecasts for the industry citing the potential of an Evergrande default to roil its suppliers, other developers and financial markets.

Much hinges on how big the real-world impact winds up being on the wider property sector, which is key to the Chinese economy. Risks are growing that consumers could retrench further as the company falls behind on promised construction work and faces repayments on wealth management products sold to individuals.