China’s economy took a knock in August from stringent virus controls and tight curbs on property, fueling concerns about the global recovery as countries battle to get delta outbreaks under control.

Retail sales growth slowed to 2.5% from a year ago, much lower than the 7% estimate in a Bloomberg survey of economists, as consumers cut back on spending during the summer holiday break. Construction investment contracted 3.2% in the eight months of the year, a reflection of the government’s steady tightening of property restrictions as part of a campaign against financial risk. 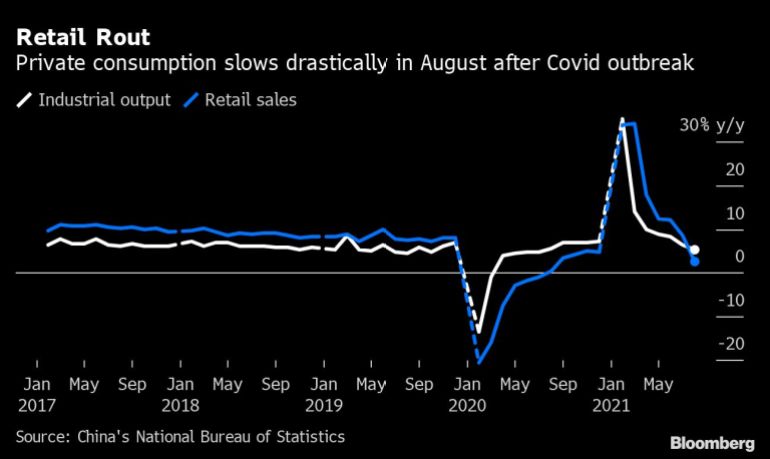 China’s slowing growth underlines how the spread of the delta variant of the coronavirus is challenging the world’s economic recovery from the pandemic. The slowdown in construction — which pushed China’s steel output to a 17-month low in August — is rippling across the global economy by reducing Chinese demand for commodities such as iron ore.

“Markets so far have significantly underestimated the scale of growth slowdown in the second half,” said Lu Ting, chief China economist at Nomura Holdings Inc in Hong Kong. Authorities will stick to their approach of “short-term pains in order to seek long-term gains,” and will likely maintain property curbs, he said.

China introduced stringent new curbs on travel to squash an outbreak of the delta variant from late July, leading restaurant & catering sales to contract 4.5% in August from a year ago after climbing 14.3% in the previous month. While China quickly brought the outbreak under control, a new virus cluster has developed in southern China this month, suggesting consumers will continue to remain cautious.

China’s 10-year government bond futures climbed for the first time in three days as the weak data revived expectations for policy easing. The CSI 300 Index pared its loss slightly after the data dump, down 0.3% as of 1:04 p.m. in Shanghai.

Key Highlights of Data Released by National Bureau of Statistics

China’s government is refraining from broad stimulus to support the economy, with policy makers ramping up targeted programs for smaller businesses instead, and pledging fiscal support through the use of local government bonds. The PBOC maintained its measured policy approach Wednesday by rolling over its medium-term loans coming due rather than injecting more liquidity.

Many economists expect the People’s Bank of China will cut the reserve requirement ratio for banks again in coming months following a surprise reduction in July.

The NBS said in a statement that even though the economy continued to recover in August, “the international environment is complex and grim, and the impact from domestic virus outbreaks and natural disasters such as floods on the economy is showing.” The economic recovery “still needs to be solidified,” it said.

While consumption should see some snapback in September, the “economy would stay under a broad downtrend in the next couple of quarters,” said Larry Hu, head of China economics at Macquarie Securities Ltd. in Hong Kong. “Policy should ease on the margin through faster government bond issuance and more loan quota, but it’s still too early for them to loosen the controls on property and local government debt.”

Beijing in recent months has been tightening access to financing for real estate developers, and reducing the pace of mortgage lending to home buyers as it tries to prevent the build up of financial risks and reduce its economic dependence on property. Growth in property investment slowed and property sales weakened in August. 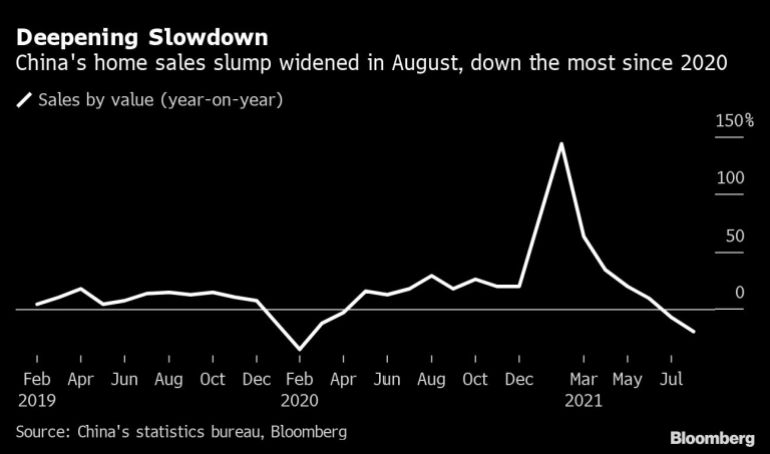 However, there are risks to manufacturers from rising costs, and the continued shortage of computer chips, which has been especially damaging for the car industry. Beijing is also trying to limit the growth of heavy industry as part of a drive to reduce emissions.