Slow stimulus spending threatens Indonesia’s recovery as smaller businesses that are the backbone of the economy have been kept waiting for much-needed funds to weather an extended lockdown.

Only about 30% of more than 186 trillion rupiah ($13 billion) of combined national and provincial government aid has yet been disbursed for micro, small and medium-sized enterprises, Finance Ministry data show. Stricter movement curbs imposed in early July are weighing on the economy in many parts of the archipelago, leading Finance Minister Sri Mulyani Indrawati to urge local governments to speed up spending, which was lower through mid-year than in 2020.

“If local spending can be accelerated in the second half, we hope this will support economic recovery in the regions,” Indrawati said Thursday.

Whether these small businesses can survive the pandemic’s blow will affect how strictly the government can impose measures to contain one of the world’s worst coronavirus outbreaks. 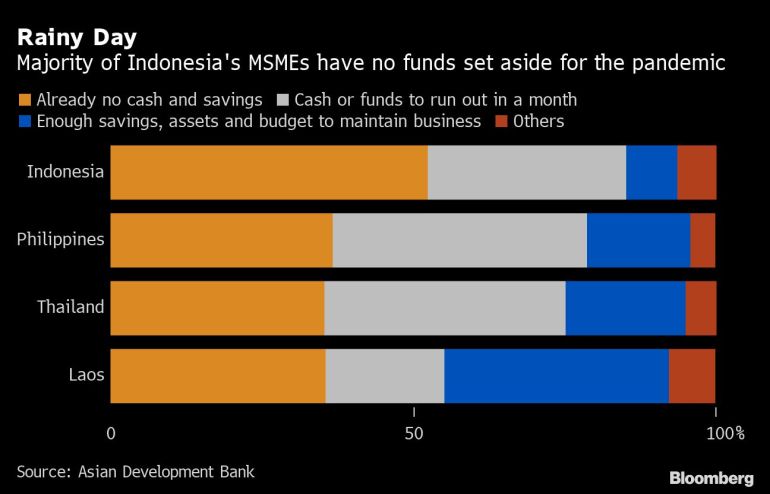 There are more 64 million MSMEs in Indonesia, employing roughly 97% of the country’s workforce accounting for more than 60% of gross domestic product. Southeast Asia’s biggest economy had contracted for four straight quarters before growing 7.07% in the April-June period compared to a year earlier, though there are concerns about whether the momentum can be sustained given the latest restrictions.

More than 30 million MSMEs have closed down in the pandemic, according to data from the Indonesian MSMEs Association, with those in agriculture, fishery and trade among the most affected. Curbs keeping people at home and restricting most establishments’ operations are set to remain in force until Aug. 9, leaving government stimulus as one of the few sources of support to keep smaller businesses running.

President Joko Widodo recently promised that 12.8 million micro businesses would receive a total of 15.6 trillion rupiah of cash aid this year, asking MSMEs to “survive with all their might” during the “semi-lockdown.”

However, announcing aid and getting it into beneficiaries’ pockets are two different things. Most assistance comes in the form of interest-rate or electricity subsidies, but many MSMEs don’t have credit lines or brick-and-mortar stores, according to Nurul Widyaningrum, senior researcher at the AKATIGA Center for Social Analysis in Bandung.

The bulk of Indonesia’s MSMEs are micro-sized and informal, operating out of homes or pushcarts, selling food and wares across different villages. They often don’t have business registration papers, which are needed to receive cash aid, she said.

Mukroni, 53, who has run a “warteg” — a stall that sells homecooked food — in Jakarta for nearly two decades, closed one of his three stalls and halved his workforce to stay afloat. Thousands of other warteg in the capital and nearby cities have shut, he said.

“I had to close one stall that was located near a university because there were almost no customers,” said Mukroni, who leads a group of warteg cooperatives in the greater Jakarta area. He and many other warteg owners haven’t received cash assistance from the government, Mukroni said, and must rely on personal debt to keep their businesses running amid revenue declines of 50%-90%.

“We’re trying to endure, but not a day goes by without us wondering how much longer we can survive,” Mukroni said.

The sector’s problems could have an outsized impact in Indonesia, which this year lost its upper-middle income status from the World Bank amid worsening poverty and unemployment. According to Asian Development Bank data, 44% of Indonesia’s MSMEs are either wholesalers or retailers, higher than the 25% in neighboring Philippines.

That means Indonesian MSMEs “have a critical role to play in the distribution of goods and services, including through conveniently located stores for the customers,” said Poornima Jayawardana, a financial sector specialist at the ADB. “Closure of these MSMEs could have a disruptive effect on local economies.”

For Edy Misero, secretary general of the Indonesian MSMEs Association, the pandemic’s impact is even more intense this year as many small entrepreneurs can’t maintain cash flow, have run out of savings and have taken on a lot of debt.

“We clearly understand that mobility restrictions are a policy that absolutely must be taken to control the pandemic,” Misero said, “but we also need the government to be more serious in helping us bear the consequences.”