The trading platform’s stock dropped as much as 17% to $58.30, after early investors proposed to sell up to 97.88 million of shares over time. None of the proceeds will be received by Robinhood, with the selling stockholders getting all of the funds from the sales, according to a filing with the U.S. Securities and Exchange Commission. The listed sellers are some of Robinhood’s biggest investors and together combine to hold more than one-third of the firm’s current outstanding shares.

The largest of those holders, Venture capital firm New Enterprise Associates, plans to trim its roughly 10% stake by about 3.9% or 2.9 million shares. Other sellers named in the filing include entities affiliated with Amplo, Andreessen Horowitz, ICONIQ Capital and Ribbit Capital. 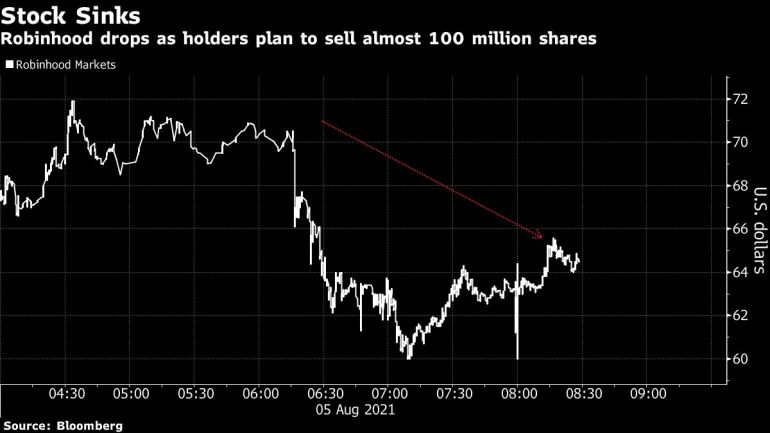 Such early selling by major investors highlights another unusual quirk of Robinhood’s IPO. While most public offerings these days are accompanied by a six-month lockup period where insiders are barred from touching their holdings, employees and directors at Robinhood were able to sell a portion of their shares as soon as the first day of trading.

The move comes just a day after shares in the zero-fee trading platform soared 50% as a flood of retail traders joined larger investors, such as Cathie Wood’s flagship ARK Innovation exchange-traded fund, in buying the stock.

Individual investors were a key driver of Wednesday’s volatility with Robinhood being the fourth most traded stock on the day across retail trading platforms, according to data compiled by Vanda Securities Pte. Retail traders exchanged $467 million worth of shares with $50.5 million in net purchases, the data show.

The spike in interest from individual investors despite Robinhood’s underwhelming IPO is a departure from companies like Coinbase Global Inc. or DiDi Chuxing Inc., which saw huge retail demand that quickly waned, according to Vanda’s Ben Onatibia. “After a poor listing, retail demand is surging, something extremely rare with IPOs,” he said in an email.

Some analysts are staying cautious. “We cannot in good faith recommend investors get involved in HOOD on either the long or short side,” Wolfe Research analyst Steve Chubak wrote in a note, initiating coverage on the Robinhood with a hold-equivalent rating and a share price target of $45.

Shares fell more than than 8% on their first day of trading last week after Robinhood priced its IPO at the low end of its expected range. They’d then gone on to rally for four straight days, including Wednesday’s surge that at one point reached as much as 82% and ballooned Robinhood’s market capitalization to a peak of $65 billion.

(Updates to include details on insider selling terms, pricing throughout and adds commentary from analyst in the penultimate paragraph.)

–With assistance from Bailey Lipschultz and Divya Balji.