For 60-year-old Maria Luisa Suarez, retirement is a dream she will never realise.

It is not for lack of hard work. Since moving from the Argentine province of Santiago del Estero to the capital, Buenos Aires, at the age of 17, she’s found gainful employment at a bakery, run a general store and cleaned other people’s homes to help make ends meet.

In between, she stayed home with her children when they were little, and juggled caring for them with extra shifts she picked up when her former husband lost his job.

But the vast majority of the income she has earned over her lifetime has been paid by the hour and unregistered. While that helped her keep more of what she earned at the time, it also resulted in paltry pension contributions.

“I didn’t realise it meant that when it came time to retire, I was going to be short,” Suarez told Al Jazeera.

Her situation is not unique. The Argentine government estimates that more than 300,000 women between the ages of 59 and 64 are unable to retire because they haven’t accumulated the necessary pension contributions.

That shortfall is driven in large part by a structural division of labour that underpins many societies including Argentina’s. Women end up participating less in the formal workforce because they are taking on the lion’s share of caregiving responsibilities at home.

For many, like Suarez, the work they engage in is also performed under more precarious and informal conditions — another disadvantage when it comes to saving for retirement.

But the Argentine government is seeking to redress that gender inequity by assigning a pension contribution value to the time people have spent raising children.

The programme, launched this week, marks the first time the role of an unpaid caregiver has been recognised by the Argentine state as something akin to work. The policy is expected to enable 155,000 more women to collect a pension immediately.

The programme is available to any woman who is at least 60 years of age and who has not been able to accrue 30 years of pension contributions.

Recognising the value of caregiving

Once someone turns 65 in Argentina, they are entitled to collect a pension from the state, even if they did not make contributions during their working life. But at around 23,000 pesos a month ($237), it is below the poverty line and less than the pension received by those who retire under the general scheme, which is built on worker contributions, and includes this new programme.

“Women and men do not have the same opportunities in the formal job market,” said Fernanda Raverta, the executive director of Argentina’s National Social Security Administration (ANSES) during a press conference on July 13 alongside President Alberto Fernandez.

“This measure highlights the fact that women effectively work more and recognises the value of care [work] in the right to access a retirement,” Raverta added.

The latest ANSES programme is part of an ongoing effort to address gender inequality in Argentina, an issue that has been spearheaded by a politically active feminist movement and is a cornerstone of President Fernandez’s mandate.

The Fernandez administration set up the country’s first directorate on economy, equality and gender and is crafting policies targeting structural issues underlying economic disparities between men and women.

To that end, the directorate published a report last year that found that “care work” — paid domestic labour and unpaid household tasks — accounts for 16 percent of total economic output, more than either industry (13.2 percent) or commerce (13 percent).

“The most interesting thing for me, and that I think is notable, is that this policy defines women’s caregiving as something that should be recognised and valued as if it was an employment contribution,” Ana Arias, a social worker and University of Buenos Aires professor, told Al Jazeera.

“We can question whether it’s enough,” she added. “I think one year per child is too little, but the path this opens up is important.”

The new programme is more permanent than past efforts to help redress Argentina’s retirement savings gender gap and is similar to one launched in Uruguay in 2009, which enabled women to claim up to five years of contributions for childcare work.

The Center for the Implementation of Public Policies for Equity and Growth (CIPPEC), a Buenos Aires-based think-tank, analysed the impact of the new policy by dividing the female workforce into three groups: women who worked in formal jobs and were able to pay for childcare or had family members to rely on; women whose work was fragmented or more precarious and had a harder time enlisting childcare; and women who had little or no formal jobs, and had to spend the bulk of their time caring for children and other household tasks.

The analysis concluded that the new programme will benefit that middle tranche of workers the most.

“That could be someone who mostly worked in the formal sector, and then left for a few years to take care of children and returned,” Luciana Petrone, coordinator of social protection projects at CIPPEC, told Al Jazeera. “But at the same time, there are a lot of women that even with this measure are not going to access the general [pension] scheme.”

CIPPEC’s findings suggest that most women who are approaching retirement age are in that most vulnerable group, given some 60 percent of women between the ages of 55 and 59 have less than five years’ worth of contributions.

Petrone says that while the new initiative will improve retirement prospects for a segment of Argentine women, the structural issues that created the problem in the first place still remain.

To fix them, she says other policies that incentivise men and women to share caregiving responsibilities — such as making paternity leave as robust as maternity leave — are necessary.

“In Argentina, and in Latin America, it’s a bit more complex because it’s not just that women participate less in the workforce, but that they are working in more informal conditions,” Petrone said.

“So if we are able to increase the participation of women in the workforce, but the jobs are precarious or of a lower quality, you’re going to keep having these issues,” she added.

For Suarez, who has had registered employment with pension contributions since 2011, the new ANSES programme will definitely help to ease her financial burdens as she ages. But she will still need to keep working for the rest of her life.

“Although I worked, everything that had to do with my children – taking them to the doctors, getting them vaccines, – I took care of that stuff alone,” she said. “I was the one who was responsible for the children.” 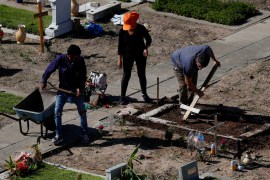 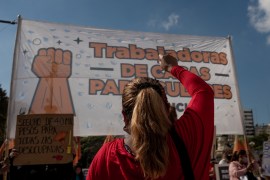 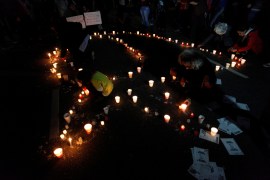 Advocates use vaccination campaign as way to keep search for grandchildren ‘stolen’ during 1976-1983 dictatorship alive. 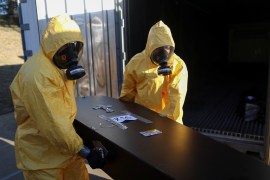