Hurricane Ida knocked out at least 94 percent of offshore Gulf of Mexico oil and gas production and caused “catastrophic” damage to Louisiana’s grid.

Power outages from a hurricane last year left oil processing plants in Lake Charles, Louisiana, idled for up to five weeks and cost owners millions of dollars in lost production.

“You can’t simply flip the switch” and resume production at a refinery, said Robert Yawger, director of energy futures at Mizuho Securities, describing restarts as complicated and dangerous. “My observation is two to four weeks” before they can be completed, he said.

Hundreds of oil production platforms remained evacuated and nearly 1.1 million homes and businesses in Louisiana and Mississippi were without power on Monday afternoon. Refineries in Norco and Belle Chasse, Louisiana, remained swamped a day after the storm passed, images showed.

Entergy Corp, the largest power utility in Louisiana, warned there was “catastrophic” damage to transmission lines. One tower collapsed at the height of the storm and its power lines fell into the Mississippi River, the utility said.

Exxon Mobil Corp halted operations at its 520,000 barrel per day (bpd) Baton Rouge oil processing and chemical complex due to lack of power and raw materials, a spokesperson said. Phillips 66 will conduct a post-storm assessment at a refinery in a hard-hit area of Louisiana “when it is safe to do so,” said spokesman Bernardo Fallas.

The outages could help push retail gasoline prices up 5 to 15 cents a gallon, tracking firm GasBuddy said. The extent of price increases will depend on how quickly electric power and a major fuel pipeline can resume operations, said petroleum analyst Patrick De Haan. 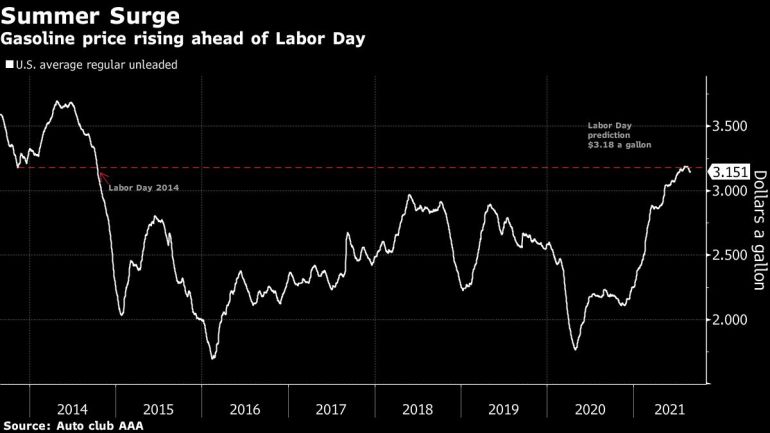 Colonial Pipeline Co, the largest US fuel pipeline network, hopes to start pumping gasoline and diesel on closed lines from Houston to Greensboro, North Carolina, on Monday evening, it said. Its network supplies nearly half the gasoline used along the US East Coast and an extended May shutdown led to fuel shortages.

Hurricane Ida’s blow to the oil industry is probably making this Labor Day the most expensive for US drivers since 2014.

The national average price for regular unleaded gasoline should climb to $3.18 a gallon this weekend because of tight supplies, said Patrick DeHaan, head of petroleum analysis for retail tracker GasBuddy.

“It will take some days to get a clear picture of possible impact,” said Ola Morten Aanestad, spokesperson for Equinor ASA, which evacuated its Titan platform and halted production in the US Gulf of Mexico.

About 1.72 million bpd of oil production and 2.01 million cubic feet per day of natural gas output remained offline in the US side of the Gulf of Mexico following evacuations at 288 platforms.

Ida made landfall near Port Fourchon, LOOP’s land base. Officials for the oil-export port were unavailable to comment on Monday.