Oil edged higher in New York as offshore explorers assess damage from Hurricane Ida and as investors shift focus to an OPEC+ meeting that could see more supply added to the market.

Futures in New York were trading just over $69 a barrel after falling as much as 1.6% earlier. While Gulf of Mexico producers had shut in about 1.7 million barrels a day of crude output ahead of the storm, refineries in Louisiana may be slower to bring back operations.

“The market is regarding the impact on crude production as minimal at this point from Ida unlike refining,” said Bart Melek, head of global commodity strategy at TD Securities. “This means less demand for feed as refiners have a reduced capacity, which could see crude scarcity worries go away.”

Gasoline futures spiked more than 4% earlier in the session before paring their advance. About 2.11 million barrels a day of refining capacity –about  12% of the U.S. total — was being shut or brought to reduced rates at plants along the Mississippi River on Sunday. 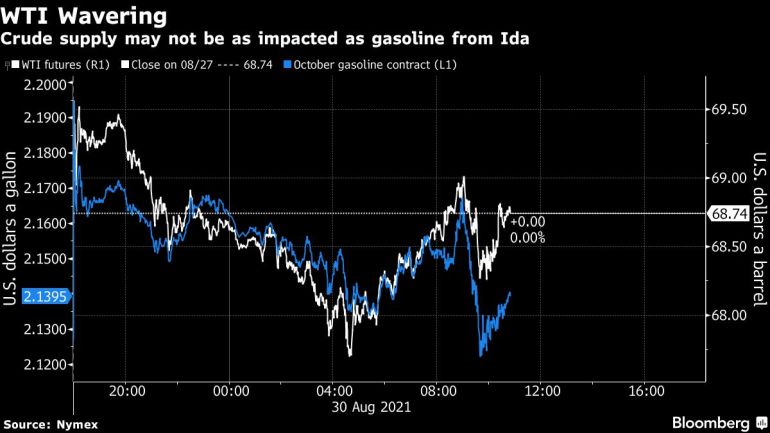 Both crude oil and gasoline have been hit by volatile trading this month as investors weighed the challenge to consumption posed by the resurgence of the pandemic in parts of Asia, the U.S. and Europe. Meanwhile, the Organization of Petroleum Exporting Countries and its partners will meet later this week and are expected to go ahead with an increase in output.

Hurricane Ida pummeled New Orleans and the Louisiana coast overnight with lashing rain and ferocious gusts, leaving much of the region without electricity and bracing for widespread floods. The storm drove a wall of water inland when it thundered ashore Sunday as a Category 4 hurricane and reversed the course of part of the Mississippi River.

“We expect a more rapid return of oil production than refining production in the region,” Goldman Sachs Group Inc. analysts wrote in a note Monday. It’s too early to determine how long refineries in the region will remain shut, they said.

Gasoline prices in the southeast U.S. could climb in the coming weeks if refineries suffer extensive damage or can’t get power and are forced to stay shut for an extended period, adding to the price inflation hitting Americans.

Spot prices for physical gasoline in Houston rose to almost a four-year premium over futures in New York.

Traders in Europe have already been preparing to fill any gap in supplies at New York Harbor, provisionally chartering tankers.

Colonial Pipeline Co., the operator of the largest U.S. fuel-distribution system from the refining centers in Texas and Louisiana to customers across the eastern U.S., idled its main network.

“For a Category 4, you could be looking at four to six weeks or more of downtime for the refineries,” said Andy Lipow, president of Lipow Oil Associates LLC in Houston.

Ida, which came ashore about 60 miles (97 kilometers) south of New Orleans, drove up ocean levels as much as 16 feet (4.9 meters). The hurricane’s 150-mile-per-hour winds tie Louisiana’s record set by Laura in 2020 and a 19th century storm.