Nasrat Khalid has been fascinated with technology and the internet ever since he was a child. Growing up as a refugee in Pakistan in the 1990s, he taught himself how to code at a very young age with the encouragement of his parents, who launched refugee schools for thousands of Afghan families like theirs.

Even as a child, Khalid believed that he would one day return to Afghanistan and use his knowledge to help connect his country to the rest of the world.

In 2018, he made that dream a reality using $175,000 in savings and loans from family and friends, to launch the internet platform Aseel.

The Etsy-style e-commerce site enables rural artisans to set their own prices and directly sell their handmade jewellery, carpets and pottery to customers around the world.

Most of the artisans who sell on the platform are women who have built upon generations-old customs of creating handmade products that reflect their culture and heritage.

In the past several months, amid intensifying conflict and advances by Taliban forces, many continued working even as they were displaced from their homes.

They are far from alone. Some 400,000 Afghans have been forced from their homes since the beginning of 2021, joining the 2.9 million people who were already internally displaced at the end of last year, according to the United Nations High Commissioner for Refugees.

The situation has become even more dire since the takeover of Kabul by the Taliban and the collapse of the Afghan government. Khalid, 30, knew Aseel was in the position to get aid to people quickly.

“The babies need milk formula now,” Khalid told Al Jazeera. “If we wait for a large humanitarian support programme, it may take up to six months, and that is going to cost lives.”

Khalid and his 20 colleagues updated Aseel’s app and platform so that anyone in the world can use it to donate emergency aid packages to Afghans in need, then recruited community volunteers to directly assist with distributing the packages and building partnerships with other donors.

So far, the company has distributed more than 3,000 emergency food and shelter packages in Kabul province, including first aid and feminine hygiene supplies, clothes, tents, diapers and baby formula. Aseel is now working to expand its services to other provinces. But the work is not without risk.

Several members of the Aseel team have left the country due to security concerns, and the company has taken actions to conceal its employees’ identities. The company’s female workers are currently coordinating aid from their homes.

“We are waiting for further announcements from the Taliban,” one of Aseel’s female employees, who asked that her name not be used, told Al Jazeera. “Female employees are not allowed to go to work in person, so we are working remotely.”

But Khalid, who is currently living in Washington, DC in the United States, said the Taliban should view the firm’s work for what it is: humanitarian aid in a time of crisis.

“Our platform in its current stage should not be a target of the Taliban, as it is fully aligned with Islamic values,” he said. “We are assisting with the continuity of systems, providing a mechanism for food distribution and shelter, and if we can expand and scale in a larger format, we may be protecting Afghanistan from falling into a civil war.”

Even before the Taliban takeover, the Afghan economy was in a fragile state. Unemployment stood at 11.7 percent in 2020, and 34.3 percent of people with jobs were living on less than $1.90 per day.

Before the takeover, “the Afghan economy was already shocked by three factors – the pandemic, drought, on top of the war”, Sheela Samimy, an economist and former director in the Afghan Ministry of Finance, told Al Jazeera.

“More than 47 percent of the country’s population live under the poverty line,” she added.

Since the Taliban took over the government, the administration of US President Joe Biden has frozen $9.5bn in Afghanistan central bank assets held in the US, and other members of the international community have taken measures to stop the flow of money to the Taliban and cut it off from the global financial system.

The International Monetary Fund announced that the group is also not able to access its resources, including $460m in new Special Drawing Rights allocated to Afghanistan on Monday.

Halted aid flows have amplified the humanitarian crisis, and many families are running out of cash and food after banks remained closed for more than a week and the currency continues to depreciate.

For these reasons, Samimy urges the international community to think of the Afghan people while setting policy.

“This is the time to avoid any more financial pressures or potential sanctions,” she said. “We cannot afford any further reduction in Afghani value, as the public will have no power even to buy basic food items.”

A community in limbo

The ability of the artisans who work with Aseel to support themselves is also in jeopardy. Over the past three years, Khalid and his team created partnerships with more than 40 artisans across the country and set a goal of creating 10,000 jobs.

Khalid’s team aimed to empower people in impoverished and rural communities, especially those living in areas without the internet connections, banking access or distribution chains needed to sell their wares. Just 11 percent of Afghans had internet access in 2017, according to the latest figures available from the World Bank.

Aseel gave artisans the platform to sell their products online through either its website or app using Stripe credit card transactions.

Before the banks shut down, Aseel would transfer the funds owed to the artisan — minus a 20 percent commission — in the form of cash or digital wallets.

The business previously relied on a DHL-backed custom supply chain and tracking system run through Bagram Airfield to ship goods out of the country.

But since the US announced it was withdrawing its troops, Aseel has pivoted to sending products across the border to Pakistan to ship onward to the US, Australia and the United Kingdom.

They are conducting their regular operations at reduced capacity to focus on aid, and are distributing necessities sourced from local markets and Pakistan to Afghan families in need.

But the future of the business  — and the burgeoning Afghan startup culture it was part of — remain uncertain under Taliban rule.

Before the takeover, tech entrepreneurs would connect through a developers’ community called CodeWeekend, which had flourished over the past five years to include more than 5,000 active members.

The community’s founder, Jamshid Hashimi, said the group is still active and is now working on a programme to expand its network to Afghan refugees around the world.

“Tech skills are easily portable. They give opportunities to Afghans who want to relocate to other countries,” Hashimi told Al Jazeera.

But security and safety are the primary focus of many entrepreneurs and their teams during this time.

The Taliban have not communicated how they intend to govern businesses going forward, particularly when it comes to regulating tech and the internet. Hashimi hopes they embrace these as necessary.

“If the Taliban are to govern, they cannot avoid technology to keep up with the rest of the world,” Hashimi said. “Coding, software and technology are shortcuts, catalysts and enablers in moving society forward.”

Khalid echoes his sentiments, noting “Tech needs to be the main tool going forward if we want to bring dramatic changes in Afghanistan within a short period of time.” 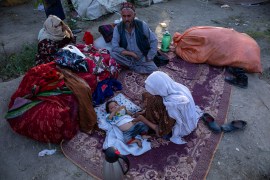 Afghans are joining together to help thousands of displaced families who have fled their homes in the past weeks. 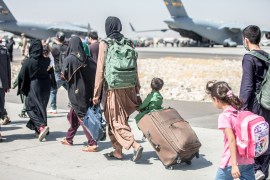 Afghans kept in wretched conditions at US base in Qatar

Pentagon says the US was working on improving conditions for Afghan evacuees at the US base in Qatar. 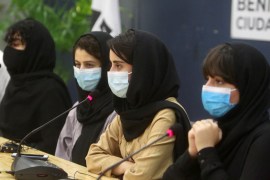 Five members of the robotics team arrived in Mexico, fleeing an uncertain future at home. 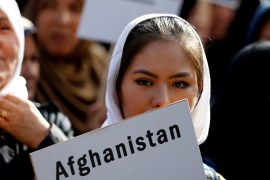 Airbnb said it will work with resettlement agencies to provide temporary housing to 20,000 Afghan refugees worldwide.