By Antony Sguazzin and Ray NdlovuBloomberg

Zimbabwe will use more than half of the $961 million allocated by the International Monetary Fund in the form of special drawing rights to support its beleaguered currency.

The government abandoned a 1:1 peg between a precursor of the reintroduced Zimbabwe dollar and the greenback in February 2019. The currency now trades at 85.82 to the U.S. dollar and even lower on the black market, a plunge that’s made it difficult for the government to get it accepted locally, and it’s generally not tradable outside the country.

“For the support of the currency we want to hold back about $500 million,” Mthuli Ncube, Zimbabwe’s finance minister, said in an interview on Tuesday.

The southern African nation abandoned the Zimbabwe dollar in 2009 after inflation rose to 500 billion percent, according to the IMF, and legalized trade in a range of currencies including the U.S. dollar and South African rand. The economy had tanked after a failed land-reform program began in 2000 that saw the seizure of White-owned commercial farms and the subsequent collapse of export earnings.

Zimbabwe’s remaining SDRS will be used to support the acquisition of Covid-19 vaccines, investments in schools, hospitals and roads and other priorities, Ncube said. Revolving funds will also be set up to help manufacturers and mining companies buy new equipment, and to revive the horticulture industry by encouraging the cultivation of roses, macadamia nuts and blueberries, he said.

The IMF injected a record $650 billion of reserve assets to build confidence and foster resilience and stability in the global economy in the wake of the devastation caused by the coronavirus pandemic. The reserves are allocated to all 190 fund members, with about 70% going to the Group of 20 largest economies and just 3% to low-income nations.

Zimbabwe won’t use any of its reserves to pay down the more than $8 billion in external debt it owes, even though its arrears have effectively blocked it from borrowing more money from multilateral lenders.

Ncube also confirmed the government was considering borrowing money from private creditors to compensate the White farmers. Bloomberg first reported on the funding option on Aug. 16.

Zimbabwe has agreed to pay the farmers $3.5 billion, half of which is due in July next year, to settle the two-decade old dispute that’s soured relations with Western countries, including the U.S. and the U.K.

“The idea is a special-purpose vehicle out of which we can then raise resources on the back of some escrowed tax revenues from specific sources that are ring-fenced,” Ncube said, adding that the tax could be in the form of mining royalties.

Another proposal under consideration is the local sale of a U.S. dollar bond, the minister said. 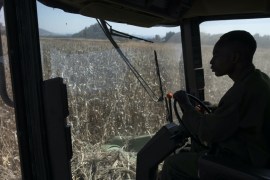 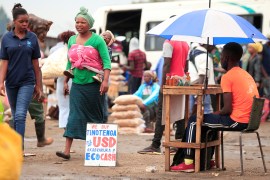 In Zimbabwe, some businesses struggle, others adapt and thrive

Some Zimbabwean businesses have been pushed to the brink by the COVID pandemic, but others have leveraged disruptions. 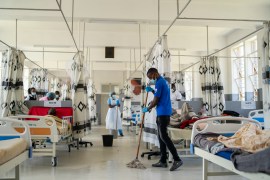 Rich or poor, in Zimbabwe crumbling healthcare is deadly for all

Unable to fly out under lockdown, Zimbabwe’s wealthy must take their chances in local hospitals alongside everyone else. 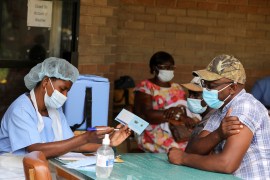 As COVID-19 spreads, Zimbabweans rush to get a jab

While the number of people receiving vaccines increases, it is still well below official target of 100,000 daily shots.