South Africa’s unemployment rate surged to the highest on a global list of 82 countries monitored by Bloomberg.

The jobless rate rose to 34.4% in the second quarter from 32.6% in the three months through March, Statistics South Africa said Tuesday in a report released in the capital, Pretoria. The median of three economists’ estimates in a Bloomberg survey was 33.2%.

Unemployment according to the expanded definition, which includes people who were available for work but not looking for a job, rose to 44.4% from 43.2% in the first quarter. While the unemployment rate is now the highest of the countries tracked by Bloomberg, the data from some of those nations is outdated. 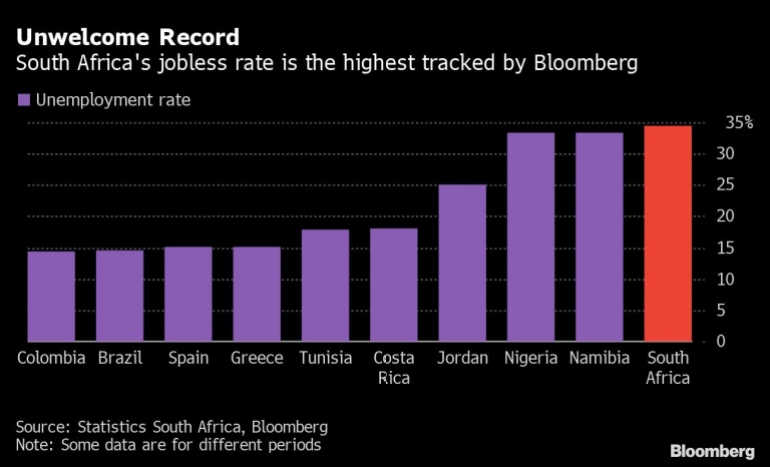 The unemployment data is likely to deteriorate in the third quarter because the government tightened Covid-19 curbs in the face of a third wave of infections, hindering efforts to revive an economy that shrank 7% last year. Rising joblessness rate could heap pressure on authorities to extend relief measures that would complicate efforts to stabilize public finances.

There was also an eruption of deadly riots in July in the Gauteng and KwaZulu-Natal provinces, two key economic hubs, which claimed 354 lives and saw thousands of businesses looted and shuttered. The unrest cost the country about 50 billion rand ($3.3 billion) in lost output and placed at least 150,000 jobs at risk, according to the South African Property Owners Association.

The unemployment rate in Africa’s most-industrialized economy has been above 20% for at least two decades, even though output expanded by 5% or more a year in the early 2000s.

South African companies’ ability to hire is undermined by an education system that doesn’t provide adequate skills, and strict labor laws that make hiring and firing workers onerous. The apartheid-era strategy of placing so-called townships, where many Black citizens were compelled to live, on the periphery of cities also makes it difficult for residents to access the formal jobs market.