Tulare, the United States — Cody Baker’s family traces its roots in Tulare County, the heart of California’s dairy industry, back almost 100 years. His mother’s side of the family migrated from the Azore Islands in Portugal and took up dairy farming, and his father’s side moved to California and took up beef cattle farming after the Dust Bowl droughts ravaged Arkansas during the Great Depression.

Baker has carried on the family’s tradition of working in the agricultural industry, with a resume that runs the gamut from livestock husbandry and farm management to crop science and processing.

Three years ago, he founded his own feed distribution company called California Livestock Services, which sells dairy farmers and livestock producers food for their cows such as hay and alfalfa, as well as providing consulting services. Even by the standards of an industry where no two days are the same, business has felt uncertain recently.

“The last year has had a lot of ups and downs, but for the moment we’re having a pretty good year,” Baker told Al Jazeera. “But we’re seeing less and less return with rising prices for things like fuel.”

Gasoline prices are up a whopping 41.8 percent from this time last year, the Consumer Price Index from the US Bureau of Labor Statistics showed, although some of that increase can be attributed to so-called base effects, given that oil demand was decimated when the coronavirus pandemic struck.

The farmers who rely on Baker’s feed are feeling the pinch, too. Soaring global commodity prices have raised the cost of the corn and soya beans that distributors like Baker sell as feed for cows, as well as the fuel farmers need to keep their businesses humming along.

And if surging inflation weren’t bad enough, the growing prevalence of droughts, which are becoming more routine and more intense due to climate change, is adding to the challenges faced by dairy farmers in California and other parts of the western US.

Now, as California struggles to cope with a drought that has resulted in emergency declarations in 50 out of the state’s 58 counties, contentious debates about the state’s water supply have been reignited, including on its dairy farms.

In August, California announced new restrictions on water use in areas of the state dominated by the agricultural sector, and such restrictions are likely to become more routine as climate change makes drought more frequent and more severe.

“Water has been tougher for farmers to get with the drought this year,” said Tom Tucker, the agricultural commissioner for Tulare County, which produced over $1.6bn in dairy products in 2019.

“With water access and energy costs going up, that causes real stress for farms that are living day to day,” Tucker told Al Jazeera.

Farmers and feed producers also lament what they see as the imposition of restrictive rules surrounding water access that make the business of farming more difficult, especially for smaller farms.

Roads that pass through California’s Central Valley, where agricultural production is concentrated, are full of signs chiding politicians with slogans like “End this man-made drought” and “Build more dam storage”.

“One of my biggest areas of concern for my business is water access,” said Joey Airoso, whose family owns a farm with around 2,900 dairy cows in Tulare County. “The regulatory environment is making it harder and harder to do business in California.”

But Michael Claiborne, an attorney at the Leadership Counsel for Justice and Accountability, which focuses on issues of inequality in California’s rural areas, says that the dairy industry already consumes an enormous portion of the state’s water, with harsh consequences for others.

“This argument is a red herring,” Claiborne told Al Jazeera. “They’re the most significant water users in the state, and across the Central Valley, we’re seeing wells for drinking water run dry because [agriculture] is overburdening groundwater resources. As surface water flows continue to decrease, this issue is only going to get worse.”

“Dairy farms are enormous water consumers because you need water for the cows themselves on top of the water you need to grow feed like alfalfa, which is very water-intensive,” he explained.

One of my biggest areas of concern for my business is water access. The regulatory environment is making it harder and harder to do business in California.

But Baker counters that the industry has taken steps to adapt by pursuing innovations around water irrigation control and disbursement use that increase efficiency.

According to the Public Policy Institute of California, which receives funding from a number of agricultural industry advocacy groups, agricultural production accounts for around 80 percent of the state’s water use for businesses and homes, and around 40 percent of its total water use. In California, farm production and food processing make up about two percent of the state’s gross state product.

Dairy farmers like Airoso have also had to cope with rising feed prices. Due to the drought, local producers have cut back on the supply of goods like hay and silage, which consists of things such as the stalks of corn plants that have been preserved for consumption by livestock.

“The drought is moderating the supply of hay and silage and keeping the price higher for those feeds that mostly come from California,” Daniel Sumner, a professor of agricultural and resource economics at the University of California, Davis, told Al Jazeera.

“On top of that, you have ​​big demand from dairy farms that have expanded milk production due to high milk prices and big government subsidies,” he said.

Another factor in the high price of feed underscores the global nature of the supply chains that create dairy products.

In 2018 and 2019, a lethal disease known as African swine fever cut China’s swine herds in half.

Now, in an effort to build back, demand from China for feed products like soya beans has surged, contributing to higher prices for farmers in the US.

These are just some of the factors, along with the need to purchase and update expensive equipment, that have led many small farmers to sell up to bigger firms. The industry has been consolidating for years: between 2002 and 2019, the number of licenced US dairy herds was cut in half, according to the US Department of Agriculture, even as the total number of dairy cows continues to grow.

“Dairy farming is an economically challenging business and some farms are always on the edge of leaving, so there is always a squeeze for some, but this year is a pretty good year for dairy farm income,” Sumner noted.

Dairy farms are enormous water consumers because you need water for the cows themselves on top of the water you need to grow feed like alfalfa, which is very water-intensive.

Still, uncertainty about the future is a barrier to some, including those in the younger generation who may look at the precarious life of a farmer and decide against entering the industry, especially as the challenges seem destined to grow.

“If you’re a young person looking at this industry and you think you can have a more stable career doing something else, you might decide that’s a better option,” said Sumner.

Some farmers, however, view uncertainty as just part of life with a livelihood that is so closely tied to the oscillating variables of the natural world.

“On balance, I’m confident about the future of the industry in California,” Baker said. And that includes the people working in it.

On his feed company’s website, he sums up life in California’s dairy country simply: “Throughout all of these years, I have seen the hardworking people in this industry, and it’s people like them that makes me proud to call this place home.” 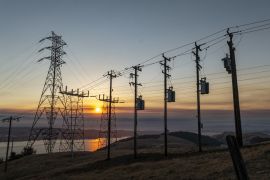 With temps forecast to reach 42C (108F), grid operators have asked residents to cut back power use to avoid blackouts. 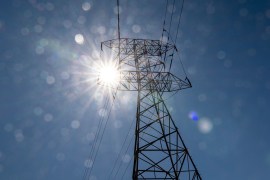 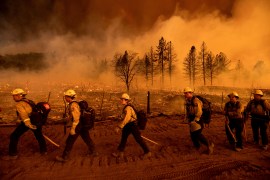 ‘Record-breaking heat’ is expected to affect much of the west and southwest US over the weekend, weather centre warns. 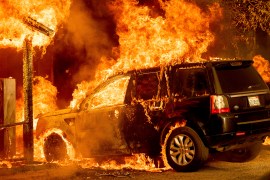