Oil fell for the sixth day in a row to the lowest level since May after the U.S. Federal Reserve on Wednesday signaled it was set to start tapering asset purchases within months.

West Texas Intermediate futures ended the session down 2.7%, dipping below $64 a barrel amid a broader commodity selloff as the prospect of reduced stimulus shook markets.

Asia’s physical market is softening with muted buying from China and a move by India to sell oil from its strategic reserves.

“The dollar is seeing considerable strength as the Fed moves to cool the economy,” said John Kilduff, a partner at Again Capital LLC. “Oil was already seeing downward pressure as the market reeled from softened demand coming out of China, and waning commodities appeal is encouraging the slump further.” 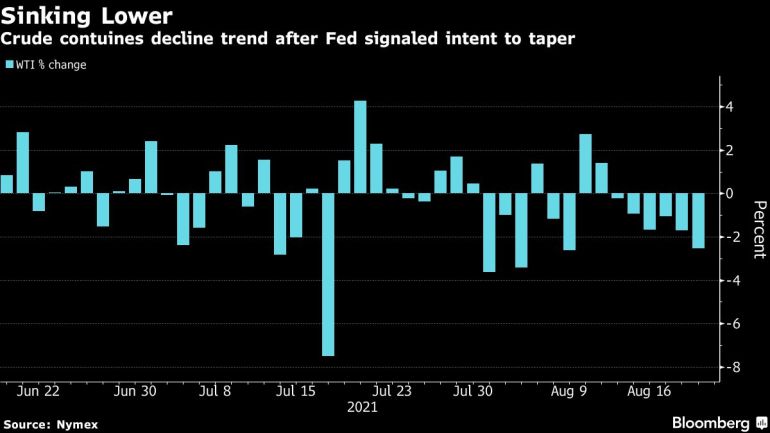 Oil’s rally in the first half of the year has lost momentum since July amid the threat to demand posed by the spread of the delta variant.

At the same time, OPEC+ pushed ahead with gradually restoring supplies. The combination of factors has led leading analysts to lower price forecasts for the last half of the year.

To cushion the U.S. economy from the blow inflicted by the pandemic, the Fed has been buying $120 billion of assets every month, buoying commodities.

The minutes of the bank’s July meeting showed a potential pullback in its monthly bond purchases, as most participants now judged it could be appropriate to start reducing the pace of stimulus.

“Economic growth concerns, stronger dollar and a risk-off environment are not helping oil,” said Giovanni Staunovo, an analyst at UBS Group AG. “Demand will continue to recover in an uneven way over the coming weeks and the oil market remains under-supplied. So that should still support prices down the road.”