Chinese stocks listed in the U.S. are facing another wave of selling pressure as authorities in Beijing ramp up their crackdown on some of the nation’s largest companies.

The Nasdaq Golden Dragon China Index — which tracks 98 of China’s biggest firms listed in the U.S. — plunged by as much as 4.5% Tuesday after China’s State Administration for Market Regulation issued a set of draft rules aimed at preventing unfair online competition.

The announcement came just hours after the state-backed People’s Daily newspaper issued a commentary saying China would increase scrutiny of the entertainment sector and what it called “idol culture.”

The moves are the latest in a series of announcements that have shaken the confidence of investors as Chinese regulators attempt to rein in the country’s tech titans. 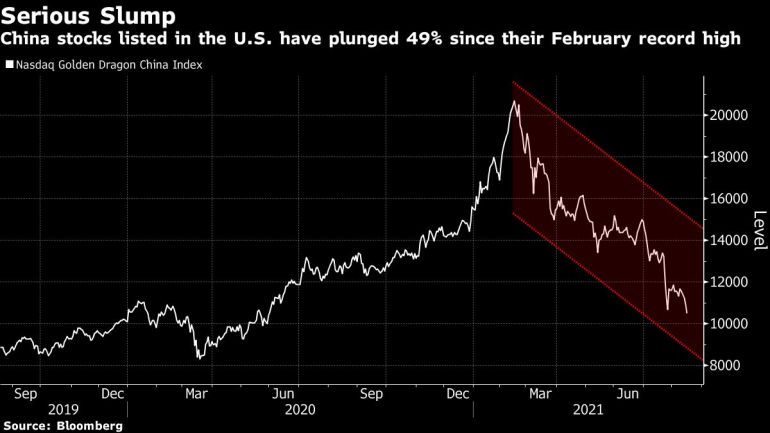 U.S. Securities and Exchange Commission Chair Gary Gensler issued his most direct warning yet on Monday about the risks of investing in Chinese companies. He asked SEC staff to take “a pause for now” in approving IPOs of shell companies that Chinese firms use to list shares in the U.S.

Tuesday’s slump is being led by tech-giants including Alibaba Group Holding Ltd., JD.com Inc. and Baidu Inc., all of which are lower by at least 3%.

The selloff adds to what has been a brutal six months for Chinese stocks in the U.S. with the Nasdaq Golden Dragon China Index plunging more than 50% since hitting a record high in February. Along the way some of the world’s most prolific investors have started to jump ship.

Cathie Wood’s flagship Ark Innovation ETF has cut its exposure to shares of companies in the world’s second-biggest economy to zero after they reached 8% of its assets in February.

Meanwhile, Paul Marshall, co-founder of the $59 billion hedge fund Marshall Wace, said in a letter to clients last week that people could make the case that U.S.-listed China shares have become “uninvestable.”

Other major funds have joined the exodus, with SEC filings showing Soros Fund Management, D1 Capital Partners and Soroban Capital Partners each exiting some or all of their holdings of American depositary receipts of Chinese companies during the second quarter.