By Joe Deaux and Ann KohBloomberg

A Covid outbreak that has partially shut one of the world’s busiest container ports is heightening concerns that the rapid spread of the delta variant will lead to a repeat of last year’s shipping nightmares.

The Port of Los Angeles, which saw its volumes dip because of a June Covid outbreak at the Yantian port in China, is bracing for another potential decline because of the latest shutdown at the Ningbo-Zhoushan port in China, a spokesman said. Anton Posner, chief executive officer of supply-chain management company Mercury Resources, said that many companies chartering ships are already adding Covid contract clauses as insurance so they won’t have to pay for stranded ships. 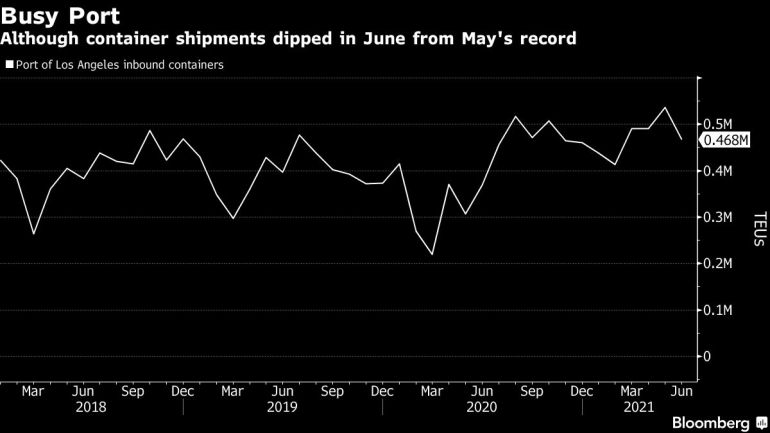 It seemed as if things were just starting to calm down, “and we’re now into delta delays,” Emmanouil Xidias, partner at Ifchor North America LLC, said in a phone interview. “You’re going to have a secondary hit.”

The shutdown at Ningbo-Zhoushan is raising fears that ports around the world will soon face the same kind of outbreaks and Covid restrictions that slowed the flows of everything from perishable food to electronics last year as the pandemic took hold. Infections are threatening to spread at docks just as the world’s shipping system is already struggling to handle unprecedented demand with economies reopening and manufacturing picking up.

Ningbo-Zhoushan Port said in a statement late Thursday that all other terminals aside from Meishan have been operating normally. The port is actively negotiating with shipping companies, directing them to other terminals, and releasing information on a real-time data platform, it said.

To minimize the impact, it’s also adjusting the operating time of other terminals to make sure clients can clear their shipments. A spokesman for the port said there were no further updates when contacted Friday.

Some ships that docked at the Meishan terminal before the closure are suspending cargo operations until the terminal re-opens, according to a notice sent by shipping line CMA CGM SA to shippers.

Other vessels which usually call at the Meishan terminal will stop at the Beilun terminal instead, according to a statement Thursday from A.P. Moller-Maersk A/S. One of the company’s ships will skip Ningbo next week, it said.

“We are working on contingency plans in order to mitigate the likely impact on our vessel schedules and cargo operations,” Orient Overseas Container Line, a subsidiary of Orient Overseas International Ltd. container subsidiary said via email. 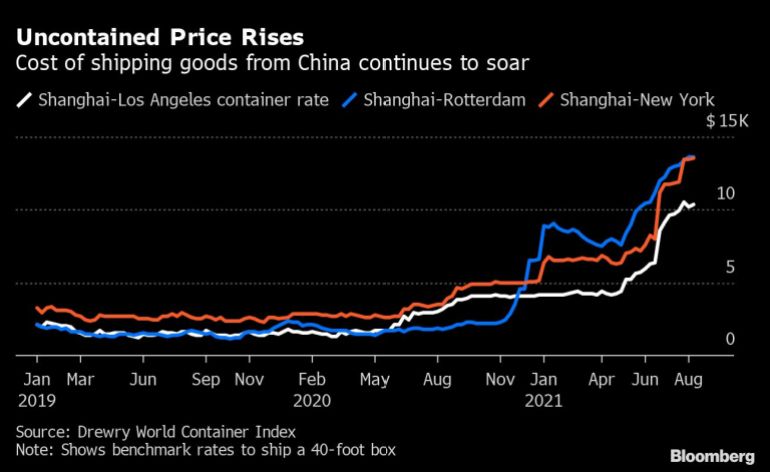 Ningbo city is still considered a low risk virus area, according to the city’s health commission, although flights to and from the capital Beijing have been canceled.

Authorities in Ningbo said the port worker was fully vaccinated with an inactivated vaccine and had the second dose on March 17. The worker was asymptomatic as of Thursday afternoon. He was infected with the delta strain, genetic sequencing showed, and epidemiological investigation shows the worker had come into close contact with sailors of foreign cargo ships.

The Baltic Dry Index that serves as a global benchmark for bulk shipping prices is up more than 10% since a month ago as the delta variant began to spread rapidly. While there haven’t been significant effects on U.S. ports, the problems in China could hurt companies that rely on container exports from the nation.

Container prices also have soared, with the benchmark cost of shipping a container from Shanghai to Los Angeles up more than 220% over the past year to $10,322 this week.