All inbound and outbound container services at Meishan terminal in Ningbo-Zhoushan port were halted Wednesday until further notice due to a “system disruption,” according to a statement from the port. An employee tested positive for coronavirus, the eastern Chinese city’s government said.

The closed terminal accounts for about 25% of container cargo through the port, calculates security consultant GardaWorld, which said “the suspension could severely impact cargo handling and shipping.” Germany’s Hapag-Lloyd AG said there will be a delay in sailings.

This is the second recent shutdown of a Chinese port due to the coronavirus, after the closure of Yantian port in Shenzhen from late May for about a month. That led goods to back up in factories and storage yards and also likely lifted soaring freight rates, which are at record levels and a source of inflation.

The fear is that this new disruption will further strain shipping and supplies of goods, dampening growth and driving up prices. An extended shuttering at Ningbo could be especially painful for the world economy because seaborne trade usually rises toward the end of the year as companies ship Christmas and holiday products. 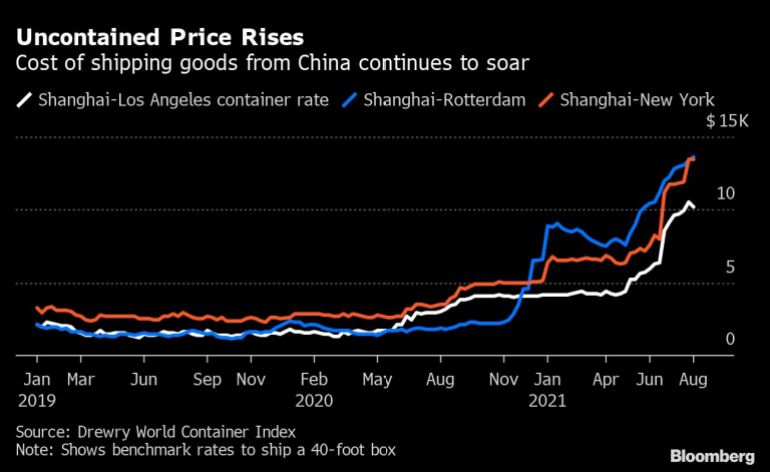 “There may be far-reaching downstream consequences going into Black Friday and holiday shopping seasons” and the next 24 hours will determine whether there is a large outbreak or not, said Josh Brazil, vice president of marketing at project44, a supply-chain intelligence firm. “One of the few givens in 2021 is endemic delays, and the fact that conditions can change almost overnight.”

In addition to the closed terminal, containers for shipment through the other terminals in the port will likely slow. The port will now only accept containers within two days of a ship’s estimated arrival time, according to a statement from shipping and logistics firm CMA CGM SA. 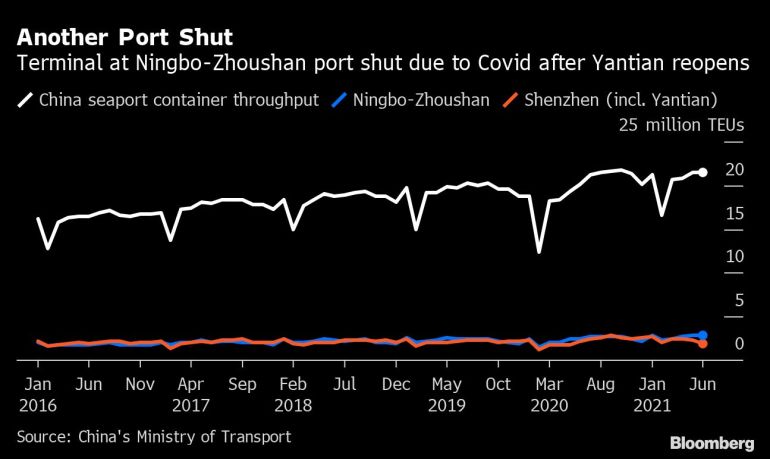 The biggest exports through Ningbo in the first half of this year were electronic goods, textiles and low and high-end manufactured goods, according to the city’s Customs Bureau. Top imports included crude oil, electronics, raw chemicals and agricultural products.

Speaking about the outbreak, Hugo De Stoop, CEO of oil shipper Euronav NV said “there will be an impact on China’s oil demand, but the length of the impact is unclear.”

For port outbreaks “the Chinese authorities are very very strict. When they find a case they will be very quick to shutdown, isolate the workers, isolate the coworkers who have had contact with that specific worker and then reopen as quickly as possible,” he told Bloomberg Television Thursday, adding that this strictness in dealing with outbreaks can disrupt markets.

All the close contacts of the infected worker have been identified and are in quarantine, according to Ningbo City’s statement. A port spokesman who declined to give his name said there was no new information when contacted Thursday.

The port was the third busiest globally in terms of container shipments in 2020 and the second busiest in China after Shanghai, according to maritime publication Lloyd’s List.

The discovery of the port worker that tested positive for Covid-19 shows that virus-prevention measures in Ningbo City still has loopholes, the local government said in a statement on its website Thursday, which urged officials to implement quarantines, disinfection and close affected areas to prevent the virus’ spread.

(Updates with more details of trade through port in eighth paragraph.)