The world’s largest cryptocurrency is staging a comeback that has taken it up more than 50% from recent lows, reviving animal spirits and coaxing out sky-high price targets that, while a source of comedy for some, emerge when the asset is rallying.

Out are predictions the digital currency was ready to retest $20,000 amid a slew of negative headlines that many said would push it lower. Back in vogue are calls for the coin to keep rallying again to its all-time highs and beyond.

And there are plenty of superlatives to mark the moment: Bitcoin is up four weeks straight and is on pace for its second monthly advance. Overall, it’s seen its fastest 21-day advance since February, the last time it was in the midst of vaulting toward records.

“It’s roaring back,” Meltem Demirors, chief strategy officer at crypto fund provider CoinShares, said by phone. Despite new regulatory scrutiny, “many investors perceive this as positive news and a positive catalyst because it’s clearing up a lot of the confusion or some of the uncertainty. And I think what’s being demonstrated as well is the crypto community is no longer some esoteric corner of finance.” 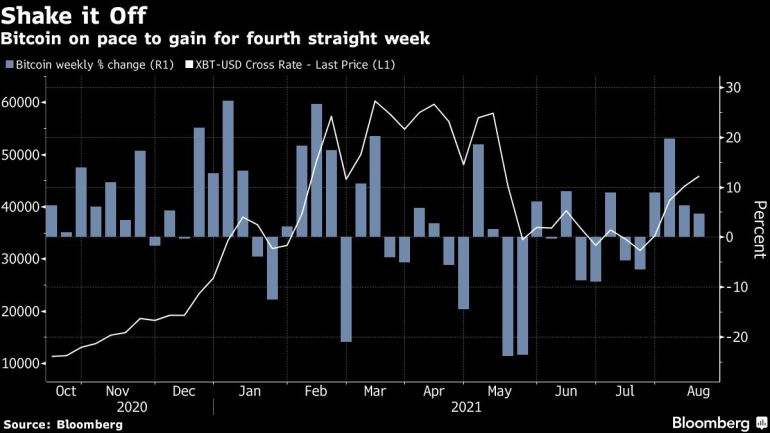 The cryptocurrency is defying criticism over its toll on the environment and is advancing even as regulators around the world are promising tougher crackdowns. China, for one, has taken a number of steps to clamp down on crypto mining, among other things. In the U.S., policy makers are focusing on digital assets in a new way, with U.S. Securities and Exchange Commission Chair Gary Gensler last week calling the space the “Wild West.” He said he wouldn’t compromise on protecting investors in setting out a regulatory framework.

Strategists are tossing those worries aside for now and are, instead, bringing out soaring price targets, which have long been a part of the investment thesis behind getting into cryptocurrencies.

“It’s still got plenty of room to get the old high,” Bloomberg Intelligence’s Mike McGlone said in a television interview. “And guess what? If it just follows Ethereum, it goes to $100,000,” he said, referring to Bitcoin catching up, percentage-wise, to the second token’s performance.

Fundstrat Global Advisors’ Tom Lee also sees it reaching $100,000 — by the end of 2021. The firm’s co-founder and head of research recommends investors follow a simple rule: If Bitcoin crosses above its average price over the last 200 days — a long-term momentum measure — then it’s time to buy. The coin crossed that hurdle in recent days.“With Bitcoin crossing above its 200D, we think Bitcoin will rally strongly into,” year-end, Lee wrote in a note.

The rally above $46,000 comes even despite potential tax reporting requirements. A change to cryptocurrency reporting rules in Congress’ infrastructure bill was blocked in the Senate Monday, leaving language for broad oversight of virtual currencies in the legislation that’s set to pass the Senate.

Bitcoin pared back gains Tuesday after reaching the highest since mid-May. Still, Blockchain Association’s Kristin Smith said she was surprised the coin advanced during the infrastructure bill debate — she thought the opposite would have happened.

“I do not understand prices. I thought prices would be tanking because of the bad language that some suggested out there,” she said on Bloomberg’s “QuickTake Stock” streaming program on Monday ahead of the provision’s blockage. “People are seeing the effectiveness that the crypto community and the crypto industry has in Washington. And I think there’s confidence that we’ll ultimately be able to get the policies right.”

To be sure, tying fundamental developments to any of Bitcoin’s moves has been a “mistake,” said David Donabedian, chief investment officer of CIBC Private Wealth Management.

“What’s driving it is momentum and money flows, and a little bit of overall risk-on, risk-off sentiment in markets,” he said. “Any thing you say or write about Bitcoin you can always do a big percentage — it’s up 50%, yes, but it went down 50% from April to June,” he said, adding “there is no credible way to value it.”

But fans watching the showdown in Congress came to see it as representing validation of the industry. On Twitter, some inferred the community was a strong enough force to put senators in check, while others regaled in its rally, reiterating it will continue on to infinity.

Other negative news has similarly been cast aside for now. China had recently reiterated its call to curtail Bitcoin mining and trading, but Ethan Vera of Viridi Funds said that’s turned out to be a positive development for Bitcoin.

“They banned it, yet the network remained pretty stable,” said the firm’s co-founder and chief financial officer. “That kind of shows the resiliency of the overall network and how it is bigger than a single country.”