The Philippine economy exited a pandemic-induced recession with its fastest year-on-year growth in more than three decades, but tighter COVID-19 curbs could hamper the recovery and boost expectations that monetary policy will remain accommodative for the rest of 2021.

Gross domestic product (GDP) rose 11.8 percent in the quarter ending in June from a COVID-driven slump a year earlier, posting the biggest year-on-year expansion since the fourth quarter of 1988, as domestic demand improved, the statistics agency said on Tuesday.

The economy returned to year-on-year growth after five consecutive quarters of contraction.

The figures come ahead of the Bangko Sentral ng Pilipinas (BSP) monetary policy review on Thursday, where it is widely expected to keep the policy rate at a record low of 2 percent.

“The robust performance is driven by more than just base effects. It is the result of a better balance between addressing COVID-19 and the need to restore jobs and incomes of the people,” said Socioeconomic Planning Secretary Karl Chua.

“The sequential contraction for Philippine GDP in the second quarter underlines our view that the economy’s recovery is likely to remain very gradual,” Bloomberg Economics’ Asia economist Justin Jimenez said. “With the capital region back under the tightest restrictions to contain the spread of the delta variant, the economy is set to take another hit” in the third quarter. 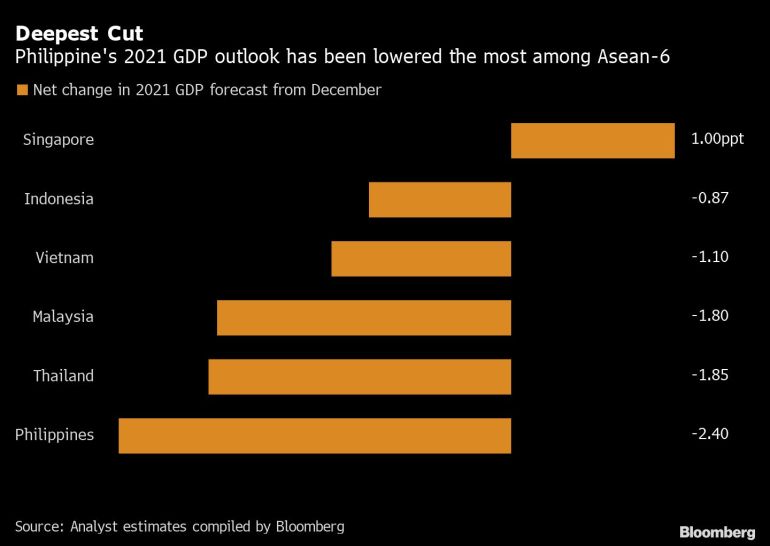 But there are growing concerns that the nascent recovery could be derailed as the government has tightened coronavirus restrictions to contain the spread of the highly infectious Delta COVID-19 variant.

During the April-June period, Southeast Asian economies from Indonesia to Vietnam began facing severe COVID-19 outbreaks fueled by the more contagious Delta variant. In the Philippines too, the main economic hub around the capital has been under repeated lockdowns.

“The economic recovery will likely face a similar setback in the third quarter as mobility restrictions returned in August with the country now facing a surge in COVID-19 infections due to the Delta variant,” said Nicholas Mapa, senior economist at ING Groep NV in Manila. “We will likely need to rework out full year GDP forecast for 2021.”

BSP Governor Benjamin Diokno on Monday reiterated the central bank’s resolve to maintain its accommodative monetary policy for as long as needed to ensure a sustainable recovery.

The economy should grow 8.2 percent in the second half of the year to hit the low end of the government’s full-year growth target of 6 to 7 percent, said Philippine Statistics Authority chief Dennis Mapa.