Oil prices rose as a weaker dollar and strong U.S. fuel demand during the country’s peak summer driving season boosted the commodity after a week of volatile trading.

Futures advanced as much as 2.4% on Friday, gaining in tandem with other commodities. The dollar weakened, boosting the appeal of commodities priced in the currency. Prices rose after a U.S. government report this week showed the seventh straight decline in crude inventories and record gasoline demand in the week leading into the July 4th holiday weekend.

Still, crude is set for its first weekly loss since May, on near-term supply uncertainty. The Organization of Petroleum Exporting Countries and its partners have been unable to reach an agreement to raise output for August and subsequent months.

“The markets will just continue to be choppy within a range,” said Michael Tran, an analyst at RBC Capital Markets. “Ultimately, the market wants to go higher, but given some of the near-term headwinds, particularly on the policy front, I think the market is taking a bit of a breather.” 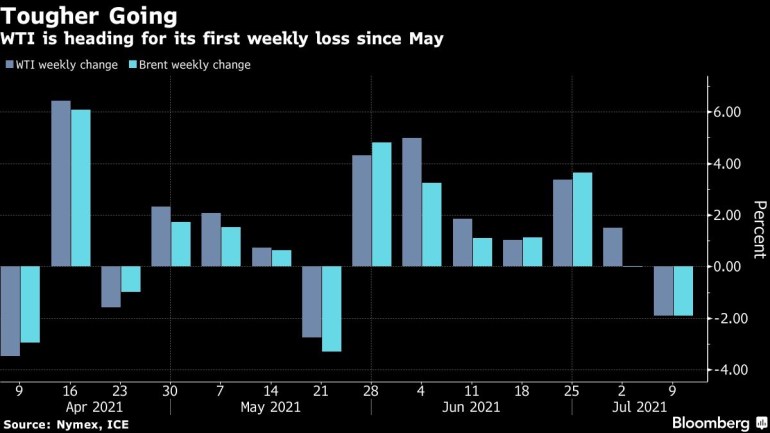 Oil prices have climbed on rising fuel consumption in countries such as the U.S., India and China. Americans have hit the road with gusto during the nation’s peak travel season as crude inventories dwindle and U.S. refineries run close to full-bore to keep up with demand.

“We’re now in the middle of what appears to be an extremely robust summer and the U.S. seeing very large stock draws, fundamentally, that we anticipate will continue to support the market,” said Tran.

At the same time, the OPEC+ alliance and U.S. shale producers have practiced discipline toward returning supply that was shelved during the pandemic. The global oil market will remain in “deep deficit” of more than 3 million barrels per day through the third quarter of the year, according to Citi analysts. OPEC+ countries will need to add more oil to the market at a higher level “sooner or later,” said the report.

Before talks broke down on Monday, Saudi Arabia proposed that the coalition gradually revive 5.8 million barrels of daily capacity in monthly installments of 400,000 barrels through to the end of next year. But the United Arab Emirates blocked an agreement, saying it will only support an extension of the pact if there are revisions to its own quota, which the country contends is outdated.

“This widening supply and demand gap puts the oil market at risk of over-tightening and should give the OPEC+ leadership ample motivation to resolve their squabble,” said Stephen Brennock, an analyst at PVM Oil Associates Ltd. “Or so you would think.”

If no agreement is reached, the existing one states that output will remain steady next month. The unresolved deadlock also threatens to unravel the alliance altogether and spark a fresh price war.

Meanwhile, President Joe Biden’s administration is starting to grapple with the possibility that the Iran nuclear deal will not be revived, after six rounds of negotiations have not resulted in an agreement. That means global oil supplies will remain tight, as the harshest restriction on the country remains the effective ban on the legal sale of its oil abroad.

Thailand ordered stricter measures to contain a surge in new cases, while South Korea is raising curbs on social distancing to the highest level in Seoul for two weeks starting Monday.