Itaguai, Brazil – Miani Cristina once considered herself lucky. Her employer had kept her on during Brazil’s devastating first wave of COVID-19 infections in 2020. Her monthly income of just over 1,000 reais ($190) and a monthly handout from the government of 41 reais ($8) had kept her and her three children afloat — barely.

“I lost all of my income and could no longer pay rent,” Cristina, a 46-year-old former general services assistant, told Al Jazeera.

The government of far-right President Jair Bolsonaro froze the monthly emergency aid packages of 600 reais ($114) it had been offering, and Cristina would have to wait three months until they resumed.

April arrived and after months of missed rent payments, eviction was looming. Cristina’s pantry was increasingly bare. But she said she was told she didn’t qualify for the new reduced monthly government aid because she was still registered as employed. She knew she was about to lose her home in a favela in the impoverished Santa Cruz district of Rio de Janeiro.

So when Cristina’s ex-colleague sent her a WhatsApp message about a new settlement being started on an abandoned plot of land some 14km from her home, she uprooted her family and hoped for brighter days.

But less than two months later, as Cristina looked out at the row of state military police blocking the entrance to the plot that had been her home for the past months, that hope was lost.

On July 1, the police evicted a community of 3,000 people from the sprawling 1,792-acre encampment in Itaguai on the western outskirts of Rio dubbed the “First of May Refugee Camp” — Cristina and her three children included.

“We have nowhere to go”, Cristina said.

The fight to stay

The camp was the latest and possibly most extensive example of informal settlements that have sprung up across the country amid Brazil’s ongoing COVID-19 crisis, a symbol of Bolsonaro’s failure to effectively soften the economic blow of the coronavirus pandemic.

Far removed from the urban struggles and crime-ridden communities that its occupants had left behind, the camp — with its biodegradable plastic tents and bamboo mini-kitchens dotted amongst soaring palm trees — symbolised a fresh start and offered residents the chance to finally have a home they could call their own.

In just two months, the occupants had set up a cistern for fresh water, small local shops and a recycling initiative. They had been eating three meals a day thanks to food donations, and their children played football freely on the dusty field behind their camp.

They’d planned to construct permanent homes on that field, as well as a school and a vegetable patch so that the families could feed themselves locally.

But the self-declared “pandemic refugees” ran afoul of the state-run oil company Petrobras, which owns the land they occupied.

In 1986, the company had set aside the land for a petrochemical park, but the project was relocated to the nearby city of Itaborai, leaving the area vacant for three decades.

Upon learning about the settlement there, Petrobras sought to evict the community. But Judge Alexandre Eduardo Scisinio from the 20th Civil Chamber of the Judiciary of the state of Rio de Janeiro refused on May 7, acknowledging that the case deals with “a considerable number of people in a state of socioeconomic vulnerability”.

The First of May camp residents could stay, he ruled, until Rio’s State Public Defender’s Office reassessed the COVID-19 risks at the end of the year.

Infection rates remain high, and little more than 10 percent of people in the state of Rio de Janeiro have been fully vaccinated, according to a tracker developed by Globo media group.

Petrobras’s communications department told Al Jazeera via email that the repossession was carried out in line with a warrant issued by the court and had the support of social assistance authorities and the police. The email added that “assistance was offered to the families”.

“Teams from the city of Itaguai registered the people who expressed interest in going to the shelters,” the company said in the statement. “Petrobras is funding food, mats, blankets and kits with alcohol gel and masks for the families who are sent to the shelters. Transport to bus stations near the Municipality of Itaguai was also offered, and storage and storage service for goods in a warehouse contracted by Petrobras was made available.”

But many former First of May residents say they have once again found themselves on the streets.

One month later, the Brazilian Supreme Tribunal Court ruled to suspend evictions of irregular settlements for the following six months across the country, but only for settlements established before March 20, 2020.

Anderson Lopes Miranda, a coordinator from housing rights campaign Despejo Zero in Sao Paulo, told Al Jazeera that his team is fighting to make that ruling permanent for all settlements established during the pandemic.

But that won’t be decided until the temporary ban on occupations is reviewed at the end of 2021, leaving more than 64,546 families at risk for eviction, according to the campaign.

The First of May eviction has flung into the spotlight Bolsonaro’s lacklustre response to the country’s overlapping health, economic and housing crises.

In April, Bolsonaro once again declared that “the return of the right of men and women to work in the country is essential” but the Brazilian Institute of Geography and Statistics found that due to the prolonged COVID-19 crisis, Brazil’s unemployment rate had spiked to a record 14.7 percent in the first quarter of 2021.

According to Cloviomar Cararine, an economist and analyst at the Department of Statistics and Socio-Economic Studies, the reduction in emergency aid, coupled with inflation, has left over 19 million Brazilians struggling to afford food and other basic necessities.

That’s in part due to the policy of Petrobras to keep the median domestic fuel price in line with the median fuel price internationally, plus import costs, Cararine explained. High fuel costs can also increase the prices of a range of other consumer goods and transportation, which is disproportionately impacting low-income Brazilians.

That makes this year’s aid from the government far from enough to survive on.

Jose Costa, 66, one of the former First of May camp residents, told Al Jazeera that he’d arrived at the camp when his monthly government aid was slashed in half this year and he could no longer pay his bills or rent.

“I received the aid but it wasn’t even enough to pay my light bill,” he said.

Already among the most vulnerable even before COVID-19 struck, Brazil’s homeless population is now ballooning.

Marcelo Machado, a researcher from the Fiocruz Health Institute’s Homeless Nucleus, told Al Jazeera that an alarming number of single mothers and families are among those losing their homes.

“Specifically in Rio, we’re seeing a significant number of people living on the streets, including young workers, families and women as a result of the pandemic,” Machado told Al Jazeera.

“Our public policies assume paying rent and having access to food is easy for everyone. But the minute a worker loses their income, they’re on the streets,” he said.

In April this year, the government slashed funding for the construction of new homes for low-income Brazilians from the “Minha Casa, Minha Vida” (My Home, My Life) programme by 98 percent, a move that’s likely to leave more people unsheltered, advocates warn.

With coronavirus vaccines still months away for children and teens — and with the confirmation of the arrival of the more contagious Delta variant plus the onset of colder temperatures in winter — the next few months are likely to be tough ones for those living outdoors.

The eviction from the First of May camp made an already difficult situation worse for Cristina, who said she lost the majority of her remaining belongings when the land was cleared, including ID documents needed to apply for government aid.

“All of my personal documents were in there,” she said. “How are we going to eat now?” 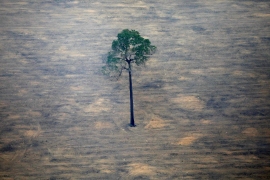 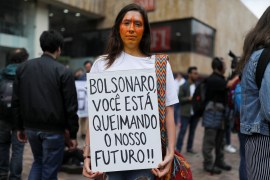 Similar orders did little in past years to stop deforestation and illegal logging in the critical Amazon rainforest. 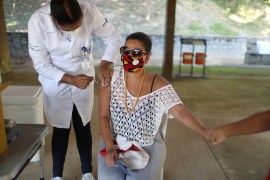 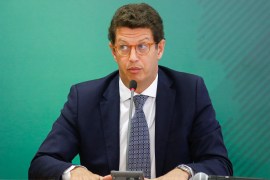 Ricardo Salle is facing an investigation to see if he obstructed a police probe into illegal logging in the Amazon.