News of the rule changes on Friday, after a leaked document circulated on social media, sent shockwaves through China’s $120bn private tutoring sector and triggered a massive sell-off in the shares of companies including US-listed TAL Education Group and Gaotu Techedu.

Chinese regulators on Saturday published reforms that will fundamentally alter the business model of private firms teaching the school curriculum, as Beijing aims to overhaul a sector it says has been “hijacked by capital”. The new regulations ban firms that teach school curricula from making a profit, raising capital or going public. Regulators also said no new licences will be granted.

TAL said in its statement on Sunday that it expects the new rules to have a “material adverse impact on its after-school tutoring services … which in turn may adversely affect” its operations and prospects. It did not elaborate. 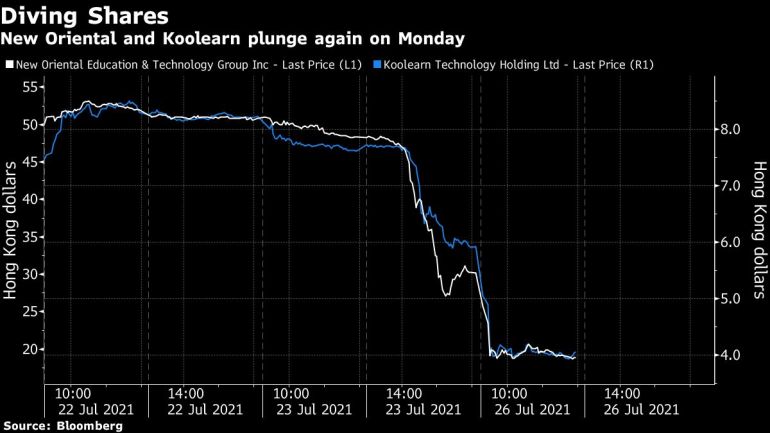 The “worst-case became a reality,” wrote JPMorgan Chase & Co analysts in a note, saying it was uncertain whether the companies could remain listed. “It’s unclear what level of restructuring the companies should undergo with a new regime and, in our view, this makes these stocks virtually un-investable.”

China’s for-profit education sector has been under scrutiny as part of Beijing’s push to ease pressure on school children and reduce a cost burden on parents that has contributed to a drop in birth rates.

“The company is considering appropriate compliance measures to be taken, and expects such measures to have material adverse impact on its afterschool tutoring services…,” New Oriental Education said in a statement.

Online education services provider Koolearn, which expects its after-school tutoring services to be affected, said it will comply with the relevant rules when providing educational services.

Scholar Education said authorities had yet to provide details around the implementation of the rules and there were uncertainties as to when and how such rules will become specifically applicable to the group.

“The company is in communication with the regulatory authority and will make appropriate adjustment of its business model whenever needed to ensure the compliance with the new policies under the opinions,” China Beststudy Education said.

“I personally have always stayed away from the education sector as regulations have been changing erratically for many years,” said Dave Wang, portfolio manager at Nuvest Capital in Singapore.

“But the broader view is that the Chinese government has always been more particular on sectors that have widespread social implications. The increasing difficulty for investors and companies is that the boundary seems to be extending … (and) no one knows what might be next.”

In May, China said it would allow couples to have up to three children, from two previously.

The latest reforms follow an unprecedented pace of regulatory tightening from Beijing, amid crackdowns on industries from tech to real estate. The government’s moves to rein in the nation’s powerful tech firms such as Jack Ma’s Ant Group Co and Didi Global Inc have sent global investors fleeing. A campaign to cut leverage in the property industry has also weighed on builder shares, with a Hong Kong gauge of related firms falling to its lowest since February.