Turkey’s central bank kept its benchmark interest rate unchanged for a fourth month on Wednesday, as rising prices and a weakening lira blight the economy’s recovery from pandemic lockdowns.

The Monetary Policy Committee held its one-week repo rate at 19% as forecast by all 21 analysts surveyed by Bloomberg. Turkish inflation accelerated faster than all estimates in June due to rising global commodity prices and the easing of coronavirus restrictions, leaving little room for the reduction in borrowing costs President Recep Tayyip Erdogan has sought for July or August.

The central bank said it’ll maintain its current monetary stance until a significant drop in price growth, and warned of “possible volatility” in inflation during the summer as the economy reopens.

“The current account is expected to post a surplus in the rest of the year due to the strong upward trend in exports, and the strong progress in the vaccination program stimulating tourism activities,” the bank said in a statement accompanying its rate decision.

With inflationary risks seen extending into July, a separate survey of 14 analysts showed most only expect a rate cut in the final three months of 2021. Four said the central bank would start monetary easing in the third quarter.

Morgan Stanley analysts including Alina Slyusarchuk forecast a 100 basis-point cut in September, “when inflows related to tourism provide some support to the FX market.” But if inflation pressures elevated remain, there might be a smaller 50 basis-point reduction, or a cut could be postponed until the fourth quarter, she said in an emailed note before the bank decision. 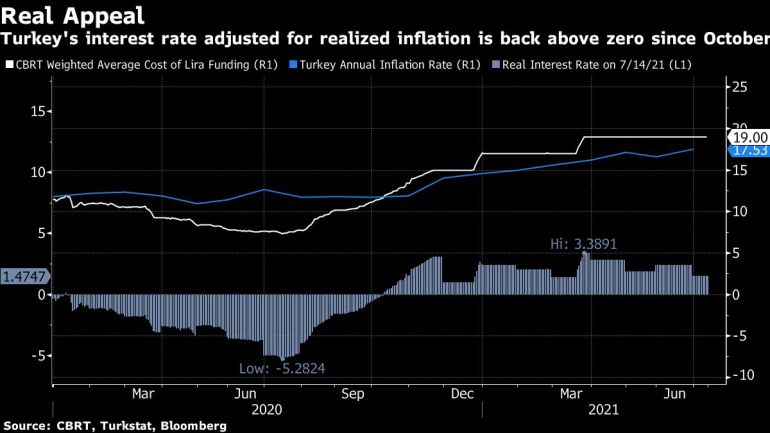 The lira has weakened more than 15% against the dollar since bank Governor Sahap Kavcioglu took over in March, even though he’s pledged to maintain a positive rate when adjusted for realized and expected inflation and to maintain tight policy until the bank’s 5% inflation target is achieved. The currency was little changed after the decision. It was trading 0.3% stronger at 8.5993 per dollar at 3:07 p.m. local time.

Istanbul-based economist Haluk Burumcekci expects the monetary authority to increase its current year-end price growth forecast by 2 percentage points at its upcoming Inflation Report meeting. “The central bank has no room to maneuver and the only weapon it’s left with is to postpone rate-cut expectations,” he said.

A central bank survey in July showed market participants expect headline inflation to end the year at 15.6%, above its own forecast of 12.2%. The monetary authority will update its own base-case scenario for prices through the rest of 2021 and the following two years on July 29. July inflation data will be released Aug. 3.