A Virgin Galactic spaceship carrying founder Richard Branson has safely touched down after soaring to the edge of space on Sunday in a voyage the British billionaire called the “experience of a lifetime”.

The VSS Unity vessel reached a peak altitude of about 85km (53 miles), beyond the boundary of space according to the United States, allowing the passengers to experience weightlessness and admire the Earth’s curvature.

“Congratulations to all our wonderful team at Virgin Galactic for 17 years of hard hard work to get us this far,” Branson said during a live feed, as the spaceship glided back to Spaceport America in New Mexico.

“We’re here to make space more accessible to all,” Branson said shortly after the flight. “Welcome to the dawn of a new space age.”

Touchdown occurred about 9:40am local time (15:40 GMT), about an hour after takeoff.

Sunday’s launch of the VSS Unity passenger rocket plane marked the company’s 22nd test flight of its SpaceShipTwo system and its fourth crewed mission beyond Earth’s atmosphere. It was also the first to carry a full complement of space travellers – two pilots and four “mission specialists” – Branson among them.

A week away from his 71st birthday, Branson and his crewmates walked onto the tarmac waving to a throng of onlookers before boarding the Unity rocket plane parked at the end of a taxiway. A video posted by Virgin Galactic showed Branson arriving earlier at the takeoff site on his bicycle and greeting crewmates with a hug.

Space analyst Leo Enright told Al Jazeera the flight “could not have gone any smoother” and would give “an enormous boost of public confidence” to Branson’s space enterprise.

An earlier prototype of the Virgin Galactic rocket plane crashed during a test flight over California’s Mojave Desert in 2014, killing one pilot and seriously injuring another.

“The next big thing maybe is an announcement that they are opening up yet again tickets sales for his spaceplane,” Enright said.

“They closed them down after the tragic loss of a vehicle and the death of a crew member back in 2014, so there is every possibility that later today Branson will announce that he’s opening it up again and it’ll be interesting to see how many tickets he is willing to sell.”

I was once a child with a dream looking up to the stars. Now I’m an adult in a spaceship looking down to our beautiful Earth. To the next generation of dreamers: if we can do this, just imagine what you can do https://t.co/Wyzj0nOBgX #Unity22 @virgingalactic pic.twitter.com/03EJmKiH8V

Michael Hiltzik, a business columnist at the Los Angeles Times, said the flight on Sunday was nothing that had not been done before, however.

“I think the danger here is the idea that this is related to the quest for exploration of space or that it has any scientific validity, when in fact it’s PR and it works against gains in scientific knowledge,” Hiltzik told Al Jazeera.

He said he expects the market for these flights will be limited, too, given their steep price tag of about $250,000 per ticket for would-be citizen astronauts. “It’s an appeal to vanity, it’s an appeal to a certain level of thrill-seeking,” Hiltzik said.

Shortly after returning to Earth, Branson announced Virgin was offering a lucky draw for two free flights on board one of the first rocket ships. Any voluntary donations would be directed to US-based NGO Space for Humanity, he said. 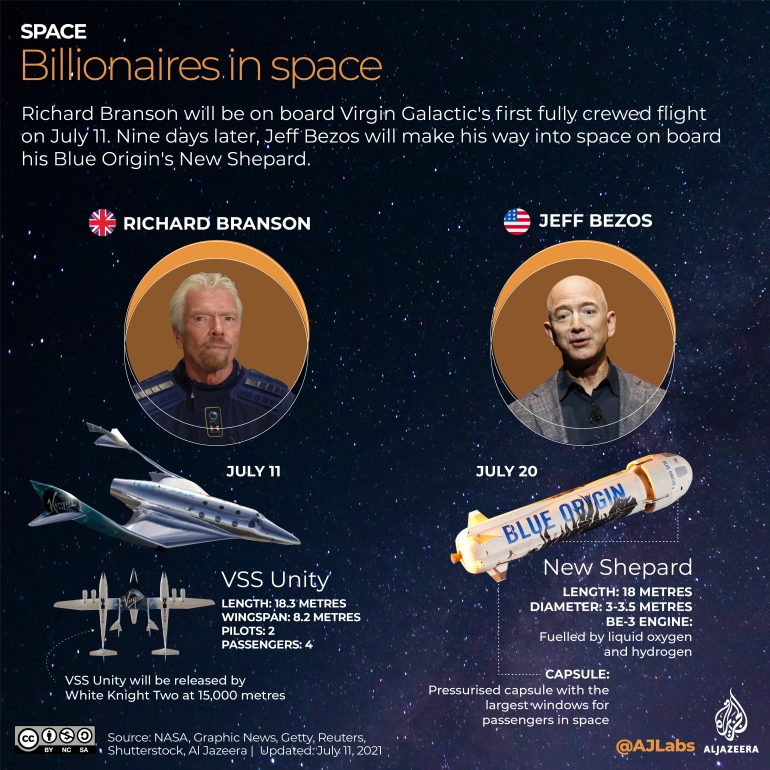 A festive gathering of space industry executives, future customers and other well-wishers were on hand to witness Sunday’s launch, which was live-streamed in a presentation hosted by late-night television comedian Stephen Colbert.

Among those present was fellow billionaire and space industry pioneer Elon Musk, who is the founder of electric carmaker Tesla.

The white spaceplane was carried into the sky attached to the underside of the dual-fuselage jet VMS Eve (named for Branson’s late mother) in a takeoff from Spaceport America, a state-owned facility near the town of Truth or Consequences. Virgin Galactic leases a large section of the 18,000-acre site.

Reaching its high-altitude launch point at about 46,000 feet, Unity was released from the mothership and fell away as its crew ignited the vehicle’s rocket, sending it streaking straight upward at supersonic speed to the blackness of space some 85.9km (53 miles) high.

At the apex of the climb with the rocket shut down, the crew then experienced a few minutes of microgravity, before the spaceplane shifted into re-entry mode, and began a gliding descent to a runway back at the spaceport.

“This is the highlight of the ride to get a view of the curving Earth and to spend a few minutes in weightlessness, get out of your seats, and do a roll which apparently they [did] so this is a big moment,” Alan Boyle, contributing editor at GeekWire, told Al Jazeera.

“It’s pretty thrilling and the view is fantastic, you can see … the slight curve of the Earth and the black sky of space above, and that’s what people are going to pay hundreds of thousands of dollars to see,” Boyle added.

Virgin has said it plans at least two further test flights of the spaceplane in the months ahead before beginning regular commercial operations in 2022.

This is no discount travel service. But demand is apparently strong, with several hundred people already having booked reservations. The Swiss-based investment bank UBS has estimated the potential value of the space tourism market reaching $3bn annually by 2030.

Proving rocket travel safe for the public is key, given the inherent dangers of spaceflight.

The success of the flight on Sunday also gave Branson bragging rights in a highly publicised rivalry with fellow billionaire Jeff Bezos, the Amazon online retail mogul who had hoped to fly into space first aboard his own space company’s rocket.

“Congratulations on the flight,” Bezos said on Instagram. “Can’t wait to join the club!”