Oil prices kept climbing on Wednesday on signs of strong fuel demand in some economies, while the possibility of Iranian oil returning to global markets was cast in doubt after the United States secretary of state said sanctions against Tehran were not likely to be lifted.

“The supercharged multi-year oil prices are a reflection of the improved oil demand sentiment, and along with it, the expectation that crude and products inventories will significantly be reduced in the second half of 2021 as a post-pandemic new normal of oil consumption sets in,” Rystad Energy’s Oil Markets Analyst Louise Dickson said in a Wednesday note.

American drivers are hitting the road again as COVID-19 restrictions are rolled back and vaccination campaigns ramp up – catalysing crude demand. 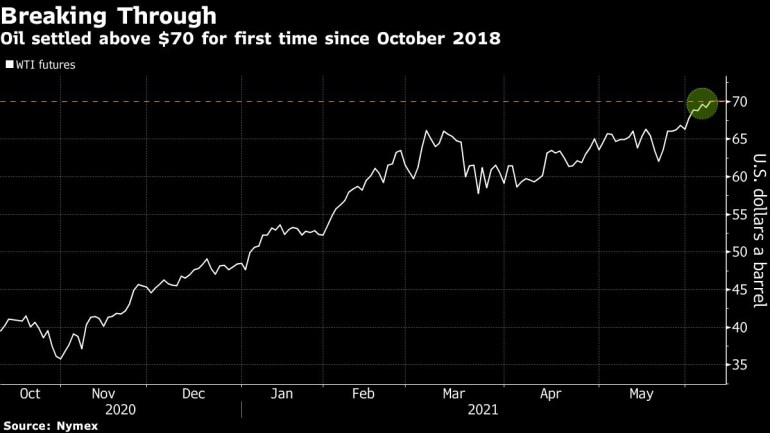 “In the US, demand for gasoline and diesel is increasing ahead of the summer driving season, which this year is getting an extra boost of momentum as it coincides with the successful vaccination campaign that has allowed the economy to open up and oil demand to tick higher,” Dickson added.

On Tuesday, the US Energy Information Administration (EIA) forecast fuel consumption growth this year in the US, the world’s biggest oil user, would be 1.49 million barrels per day (bpd), up from a previous forecast of 1.39 million bpd.

Price gains had been capped in recent weeks as oil investors had been assuming that sanctions against Iranian exports would be lifted and oil supply would increase this year as Tehran’s talks with the US on reviving the Iran-nuclear pact, known as the Joint Comprehensive Plan of Action (JCPOA), progressed.

But on Tuesday, US Secretary of State Antony Blinken cast doubt over the prospects for imminent relief for Iran’s oil sector after he told a US Senate committee: “I would anticipate that even in the event of a return to compliance with the JCPOA, hundreds of sanctions will remain in place, including sanctions imposed by the [President Donald] Trump administration. If they are not inconsistent with the JCPOA, they will remain unless and until Iran’s behavior changes.”

The Organization of the Petroleum Exporting Countries and its allies, a grouping known as OPEC+, has not indicated whether it will stick to supply restraints beyond July.