By Matt Turner and Paul JarvisBloomberg

Another batch of names has been added to the meme-stock frenzy as retail traders latched on to their latest favorites Wednesday.

Prison operator GEO Group Inc. soared 60% and Clean Energy Fuels Corp. jumped 24% as of 2:32 p.m. in New York, supplanting names like ContextLogic Inc. and Clover Health Investments Corp. that had led the charge higher on Tuesday. In Europe, Air Berlin jumped 138% after surging 54% the day before. Meanwhile, shares of fast-food restaurant chain Wendy’s Inc. reversed gains from Tuesday after both Northcoast and Stifel downgraded the stock to hold-equivalent recommendations from buy.

Trading in so-called meme stocks took off this week, with chatter building on WallStreetBets and other social media platforms on the potential for short squeezes as investors in the forums rallying against short sellers.

Speculative frenzy among the Reddit-favorite names has been especially pronounced as a broader stock market hasn’t gone anywhere for most of the past month. While shares of AMC Entertainment Holdings Inc. and Clover Health have jumped at least 85% in June, the Russell 3000 Index has advanced only 1%.

“The meme stock craze is a liquidity phenomenon,” said Matt Maley, chief market strategist for Miller Tabak + Co. “This is far from just something that the Reddit traders are playing in. There are a lot of momentum-based hedge funds (with algos) that have a lot of money pushing these things around.” 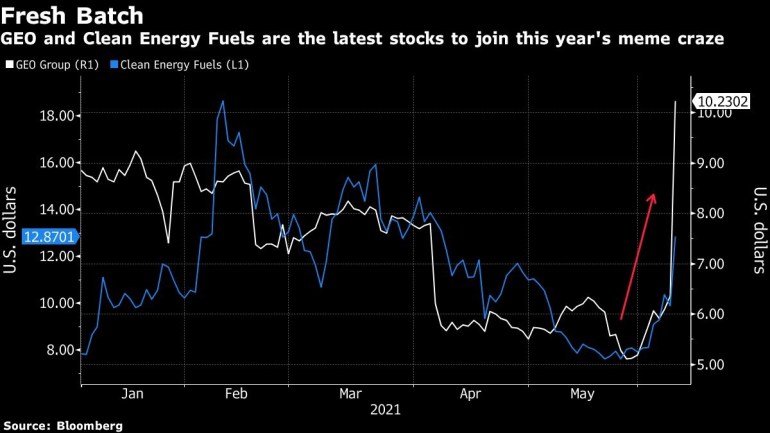 Options volume has picked up amid the recent exuberance in some meme stocks. Daily single stock option volume increased to about $383 billion in the past week, Barclays analyst Maneesh Deshpande said in a note.

“One of the surprising dynamics in the past week has been the steepening of single stock skew (in the rest of the universe) as the retail options activity picked up and demand for upside calls on meme stocks increased,” Deshpande said in the report.

On Wednesday, U.S. Securities and Exchange Commission Chairman Gary Gensler called for the agency to undertake a review of the stock market’s structure, including so-called best execution requirements. This comes after the SEC said earlier this week that it’s scrutinizing markets for signs of manipulation as meme stocks continue to surge.

GameStop Corp., which started the meme craze in January, reports first-quarter results after the close of trading today. At the video-game retailer’s annual meeting this morning, newly elected chairman Ryan Cohen gave a shoutout to the retail traders that have been fueling the stocks rally. “We’re fortunate to have such a special group of investors holding the company’s shares,” he said.

Wendy’s was downgraded to hold from buy at Stifel, which said the stock’s valuation now fully reflects the growth it had been assuming to reach its target price of $25. Analyst Chris O’Cull said in a note that he’s still “constructive toward the company’s fundamental outlook.”

Other stocks that are moving today and have high short interest as a percentage of float, according to IHS Markit Ltd. data as of 2:32 p.m. in New York: