Unemployment among Saudi Arabia’s citizens fell to its lowest level in nearly five years, but the decline was partly driven by people dropping out of the labor force, unwelcome news for a crown prince who has put job creation for a youthful population at the center of his agenda.

The jobless rate decreased to 11.7% in the first quarter compared to 12.6% in the fourth quarter, continuing a strong downward trend after hitting a record at the height of the pandemic, according to data from the General Authority for Statistics. However, labor force participation for citizens also fell, from 51.2% in the fourth quarter to 49.5% in the first three months of the year — the sharpest drop since an economic downturn in 2017. 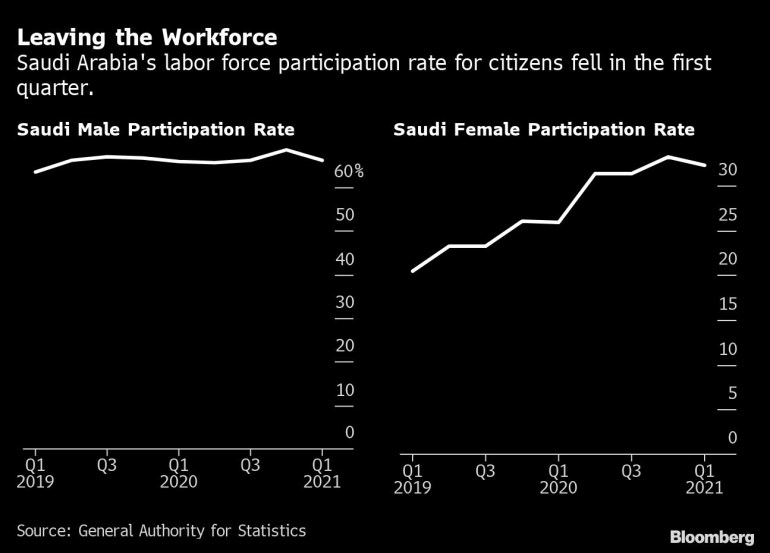 Job creation is a major consideration for Crown Prince Mohammed bin Salman, the country’s de facto leader, as he reshapes an economy dependent on exporting oil and importing foreign labor. The global health emergency exacerbated the scale of the problem, pushing citizen unemployment up to 15.4% during the kingdom’s coronavirus lockdown last year.

Officials have restricted a slew of professions to Saudis only and introduced fees for businesses that hire foreign workers — part of a broader effort to replace employees from Asia, Africa and other parts of the Arab world with citizens. Prince Mohammed is also revamping regulations to try to boost entrepreneurship and attract more foreign investment, hoping both will eventually create more jobs for Saudis.

In a local television interview in April, he predicted the jobless rate would fall below 11% this year, reflecting a “V-shaped recovery,” eventually reaching his goal of 7% by 2030.

Some economists say the prince’s target is unrealistic as a demographic bulge of young people enters the labor market, necessitating the creation of at least 150,000 new jobs each year in order to keep unemployment steady.

In the first quarter, male unemployment increased slightly to 7.2%, while among women the rate fell to 21.2% from 24.4%, following a trend of more women working as social restrictions in the conservative Islamic country loosen.

The data released Wednesday didn’t include the number of employees by sector and nationality — indicators that have been reported by the statistics authority for years — making it difficult to track job creation. In the fourth quarter, the number of Saudis employed in the private sector had fallen even as the number of foreign workers in the sector dropped by over 100,000.