After a slew of news related to renewed crackdowns from China triggered a Bitcoin selloff, chartists and analysts are turning to a sinister-sounding technical signal.

The original cryptocurrency has formed a death cross, meaning its average price over the last 50 days fell below that of its 200-day moving average. The indicator is typically seen as a closely-watched technical measure that could offer a hint at more pain to come.

Many analysts had anticipated the coin, amid a recent downturn that’s seen it lose 40% over the past two months, would form the grim-sounding pattern.

But there’s reason to believe the formation this time around might not be as bearish of a signal given that the 200-day moving average is still rising, according to Matt Maley, chief market strategist for Miller Tabak + Co. “When it starts declining, that will be more compelling,” he said.

Indeed, Bitcoin’s marking of a death cross in March 2020 proved no impediment to gains as it turned higher and formed a golden cross (when the pattern is reversed) two months later. But a death cross in November 2019 saw the coin trading lower one month later. 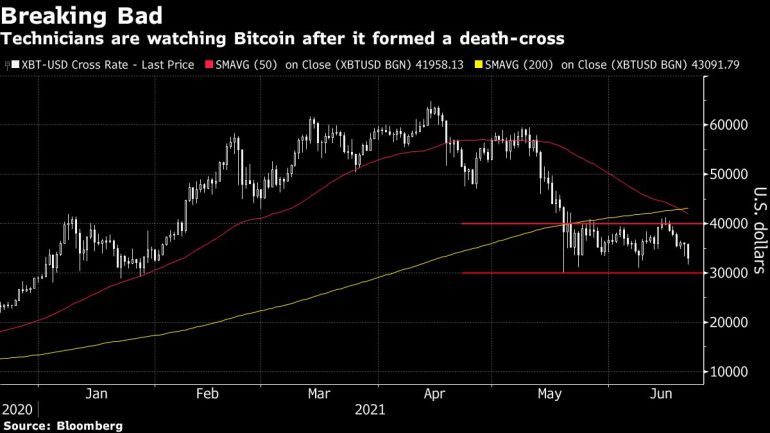 Bitcoin fell Monday to a two-week low, dropping as much as 11.4% at one point to $31,735, after China announced that it summoned officials from its biggest banks to a meeting to reiterate a ban on providing cryptocurrency services. It’s the latest sign that China plan to do whatever it takes to close any loopholes left in crypto trading.

“The fact that there’s a crackdown there perhaps does take away some of its luster,” said Jeffrey Kleintop, chief global investment strategist for Charles Schwab & Co. “I’m not sure it’s a signal of a longer-term change in direction, but it can certainly create some volatility. No one is sure the extent of the crackdown and China is an important player in the Bitcoin market.”

Some chartists also say Bitcoin, which failed to retake $40,000 last week, could re-test the $30,000 level, which it briefly touched during its brutal May selloff. Should that happen, it could have a tough time finding support in the $20,000 range.

Other cryptocurrencies also retreated — the Bloomberg Galaxy Crypto Index, which tracks some of the biggest digital coins, fell near 13% at one point Monday, marking its lowest point since February.

Bitcoin’s gains this year have shrunk to roughly 11%, in-line with the advance posted by the S&P 500 so far in 2021. The coin is on pace for a third straight monthly loss. 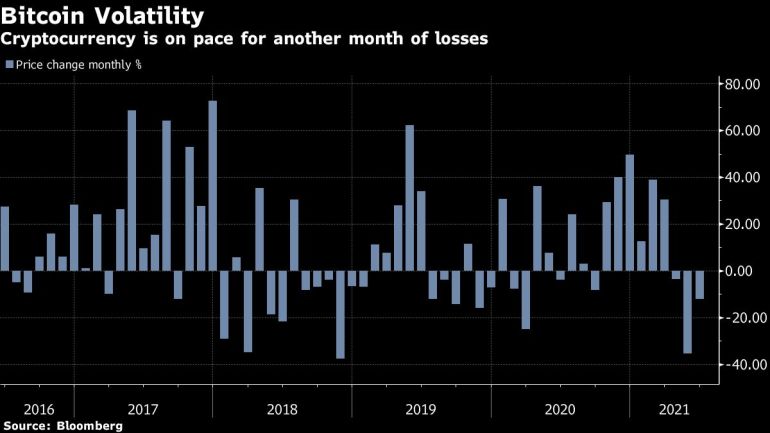 CoinShares has seen six weeks of outflows from the firm’s exchange-traded products. Demirors said investors are moving to stablecoins such as Tether, which could push prices higher when there is a positive market catalyst.