Britain’s surging coronavirus infection rate is widening a rift between airlines and health authorities over the government’s decision to maintain some of the tightest rules on travel in Europe.

Travel industry officials plan to hold events on Wednesday in London, Edinburgh and Belfast to draw attention to some 195,000 jobs they say are at risk from restrictions on overseas trips. An adviser from Public Health England meanwhile warned that a fourth national lockdown may be needed this year to control the virus.

Those conflicting priorities are fraying the political consensus Boris Johnson has enjoyed on handling the pandemic, sharpening the focus on an industry that employs 860,000 people and has been brought to a halt by government rules. It has put the prime minister on a collision course with members of Parliament increasingly concerned about damage to the economy.

“The U.K. aviation industry is the hardest hit in Europe,” said Brian Strutton, general secretary of the British Airline Pilots Association, said Sunday. “Hapless ministers give all the appearance of deliberately attacking aviation and tormenting the public with their mixed messages over summer holidays.” 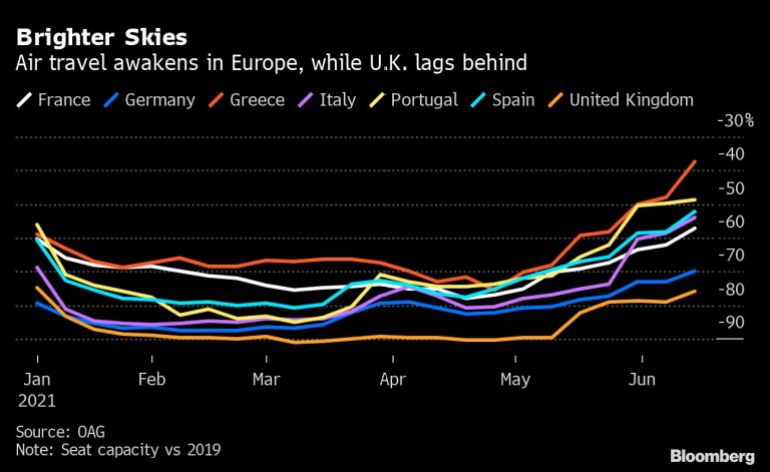 Under current rules, travelers who arrive in the U.K. must quarantine unless they’re coming from 11 green-listed jurisdictions, none of which are mainstream tourist destinations.

“It’s encouraging the data that we have seen from amber list countries, but at the moment we want to take an approach which is safer rather than sorry,” Kwarteng told Sky News.

Johnson last week delayed the final planned easing of domestic Covid rules that was due on Monday until July 19, with a review to be made next week about whether the relaxation can be made on July 5 instead. Kwarteng told Sky News it’s “unlikely” the rules will be eased early, later telling LBC radio “we’re very focused on July 19.”

Those rules are separate from the ongoing regulations governing international travel, which means arrivals from most countries have to self isolate as well as undertake several Covid tests.

The number of flights into and out of the U.K. has plunged 73% from 2019 levels, eliminating or putting on furlough 860,000 jobs in travel and tourism, according to the BALPA. Last week, Italy said it will require U.K. residents to quarantine for five days after arrival to prevent new infections.

The British government on Sunday signaled that its restrictions will continue and suggested British residents take vacations at home. Justice Secretary Robert Buckland said “normal” holidays were “never going to be the case” this year because of increasing Covid-19 cases.

“There are going to have to be significant trade-offs,” Buckland said on Sky News’s Trevor Phillips show. “We’ve tried to strike the right balance between the natural need in some cases for international travel, but also the imperative of making sure that we do everything we can at home to contain and prevent inadvertent spread of new variants.”

The government will stick with the current rules until the end of July, dashing hopes of an easing by July 5, the Telegraph reported Sunday night, citing unidentified senior government sources.

Health authorities sounded caution about efforts to ease the rules. Calum Semple, a member of the Scientific Advisory Group for Emergencies that advises the government, warned of a “pretty miserable” winter ahead “because the other respiratory viruses are going to come back and bite us quite hard.”

“The extra time to vaccinate more people, get two doses of vaccination in as many people as possible will hopefully mean that what we’re seeing with this wave won’t look the same as the previous waves that we’ve seen in this country,” Semple said on Times Radio.

“We may need to do further lockdowns this winter” if hospitals become overwhelmed, Hopkins said on the BBC’s “Andrew Marr Show.” “We should predominantly holiday at home this summer.” 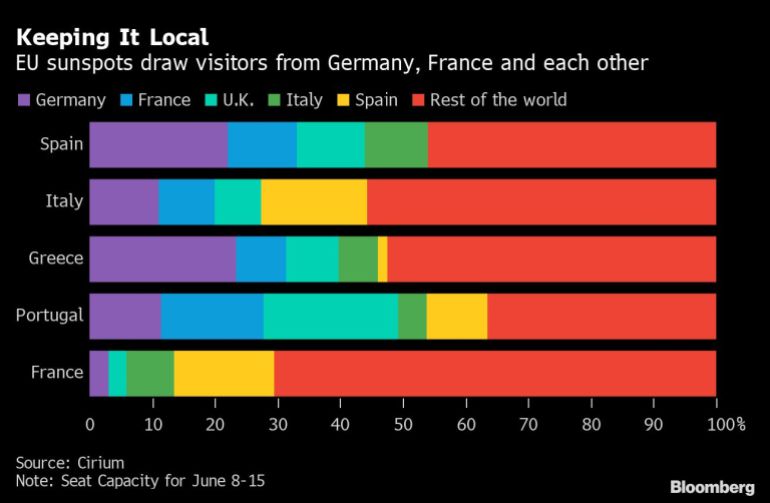 Conservative members of Parliament along with the travel industry are eager to rescue tourism before a second summer is lost to the virus. Liam Fox, the former Conservative cabinet minister in charge of trade policy, urged the government to find a way for those who have received two doses of a vaccine to travel without quarantine.

“The world cannot be closed down,” Fox wrote in the Mail on Sunday newspaper. “Sooner or later, we will have to learn to live with Covid-19 just as we have learned to live with other viral illnesses.”

There’s also signs that some figures in the Labour opposition are growing weary of supporting the government on the virus. Manchester Mayor Andy Burnham said there are limits to what the public can tolerate.

“I don’t think we should take unnecessary risks at this particular moment in time, but it does need to be this irreversible process that the prime minister has spoken about,” Burnham said on the Marr program. “I don’t think we can ask people to put their lives on hold for much longer.”