President Recep Tayyip Erdogan has sent Turkey’s lira currency to new all-time lows after he called for interest rate cuts in the next two months and said he spoke to the central bank’s new governor about it.

“I am behind the same claim on this issue – I even spoke to the central bank governor today – we certainly need to lower interest rates,” Erdogan told a televised interview with state broadcaster TRT Haber late on Tuesday. “For that, we need to see July, August for interest rates to start coming down,” he said, adding that lowering interest rates would lift the burden on investments.

The Turkish leader’s remarks were part of a longer explanation of his unorthodox belief that lower borrowing costs will help slow inflation, unlike what most central bankers around the world believe. Cutting interest rates will lower producers’ costs and eventually result in slower increases in consumer prices, Erdogan said.

“If we remove the burden of interest rates from investments and costs, then we will enter a calmer environment because it’s the interest rates that cause cost inflation” in the first place, Erdogan said. 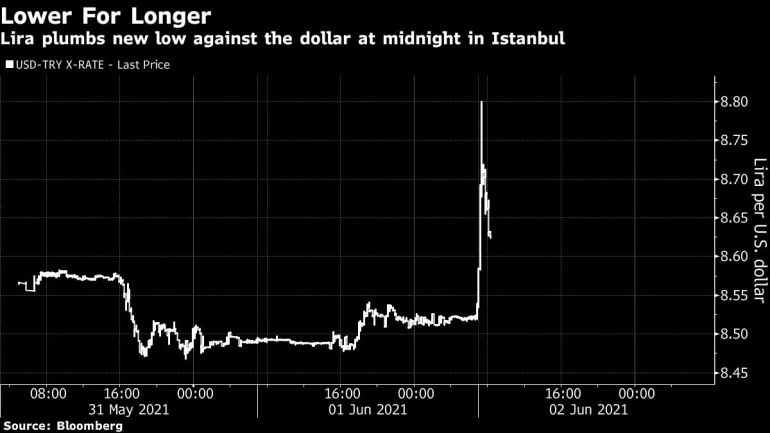 It has lost 16 percent since mid-March when Erdogan, a self-described “enemy of interest rates”, removed a hawkish and well-respected central bank chief and installed a like-minded critic of tight policy.

New bank Governor Sahap Kavcioglu has since kept the policy rate steady at 19 percent though analysts expect a cut in the third quarter. Inflation has risen above 17 percent and the currency depreciation adds price pressure via Turkey’s heavy imports.

Central bank leaders are set to hold calls with investors later on Wednesday to discuss policy and economic prospects.

“This late-night intervention by Erdogan talking about rate cuts is clearly unhelpful for Kavcioglu heading into his investor calls,” said one foreign investor.

The currency was battered again last week on concerns over global inflation and an early election in Turkey.

Turkey, which relies on foreign currency income from tourism to shore up its current account deficit, risks another lost season this year as several countries imposed restrictions on travel due to the high number of COVID-19 cases.