A supply glut that’s held down Dubai’s property prices for over half a decade will likely keep it on the sidelines of a global upswing in values of prime residential real estate.

Fast emerging from the pandemic slump, the construction industry will deliver an estimated 62,000 homes in the emirate this year and nearly 63,500 in 2022, which would be the most since 2009, according to consultancy firm Knight Frank LLP.

The burst of supply will probably leave Dubai, alongside Buenos Aires, as the only two cities in Knight Frank’s selection of 25 prime locations to witness a decline in values for their top-end residential properties. 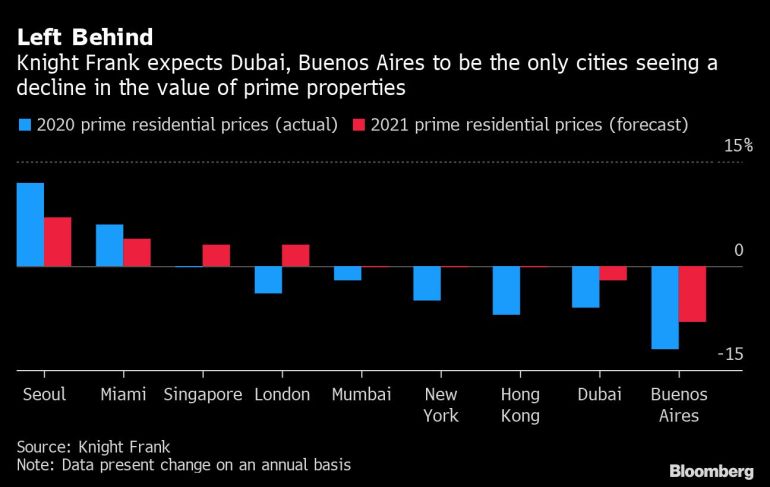 “The supply-demand imbalance has been a defining feature of Dubai’s residential market ever since the Great Recession of 2008-09,” said Faisal Durrani, head of Middle East Research at Knight Frank. “Looking at the next few years, this looks set to persist.”

While the wealthiest home buyers who fled virus lockdowns for Dubai have helped spur demand for luxury homes earlier this year, the improvement hasn’t been uniform. Much of the city’s real estate is still working through an oversupply that drove down values by over a third since 2014.

The pandemic compounded the pressures from job losses and departures of foreign workers, chipping away at demand for rentals. The booming residential pipeline suggests that chronic oversupply will remain a key vulnerability for Dubai, one of seven sheikdoms that make up the United Arab Emirates.

Still, the outlook also means that Dubai will be a relative bargain for buyers with deep pockets. A million dollars can buy 165 square meters (1,776 square feet) of space in Dubai, around five times more than in London or New York, according to Knight Frank. Dubai has 42,356 homes valued at $1 million, second only to the U.K. capital. 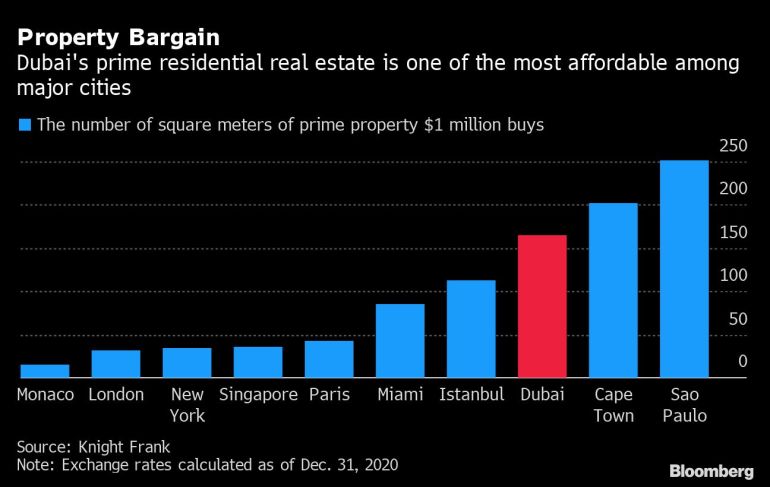 Home prices overall are set to fall 2% to 3% while single-family properties — known locally as villas and making up about a third of the city’s residential supply — are likely to climb 3% to 4%, Durrani said.

While some completion delays are likely, “it does appear as though the market is being supplied with more homes than can be absorbed,” he added.

Still, Knight Frank forecasts prices will decline at a slower pace thanks to easing travel restrictions and plans to stage the postponed Expo 2020 later this year.

With “an improved economic outlook, business confidence is rising and that is filtering through to the property market in the form of heightened interest and rising deal volumes,” Durrani said.

(Updates with comment on supply delays in 10th paragraph)
–With assistance from Abeer Abu Omar.