As United States and Iranian negotiators attempt to revive the 2015 nuclear deal, experts are sounding the alarm over the standards that govern how frequently international watchdogs inspect the world’s civilian nuclear facilities to ensure that weapons-grade materials are not diverted to military uses.

A report (PDF) released on Thursday by the Nonproliferation Policy Education Center (NPEC), a Washington, DC-based non-profit, warns that the International Atomic Energy Agency (IAEA) is using long-outdated benchmarks for detecting amounts of redirected nuclear materials needed to make an explosive device with a destructive capacity rivalling the bombs dropped on Hiroshima and Nagasaki in 1945.

The benchmarks in question are known as “significant quantities” – or SQ values for fissile materials. Those SQ values determine how often the IAEA inspects civilian nuclear facilities to ensure that dangerous amounts of plutonium or enriched uranium are not channelled covertly into weapons programmes.

Part of a larger two-year study to assess what will be needed in the coming decades to verify and enforce the Nuclear Non-proliferation Treaty, the report was released Thursday by NPEC to coincide with the latest round of talks aimed at bringing the US back into the Iran nuclear pact, also known as the Joint Comprehensive Plan of Action (JCPOA).

“The report highlights an issue that the Iran nuclear deal’s negotiators would do well to focus on,” NPEC Executive Director Henry Sokolski told Al Jazeera, “namely, how much nuclear material it takes to make a bomb and whether or not the deal’s inspections are geared to detect that amount. There’s good reason to doubt they are.”

The IAEA’s SQ values are eight kilogrammes of plutonium and 25 kilogrammes of highly enriched uranium – what the agency regards as enough to make a nuclear bomb with a yield of 10 to 20 kilotonnes. That is the range of explosive energy unleashed by the US bombs dropped on Japan.

NPEC warns in its report that these SQ values “are not just old, they are dangerously obsolete” because they were adopted by the IAEA in 1977, and are based on outdated World War II weapons designs.

Yet those benchmarks are tied to inspections that regimes negotiated into nuclear inspections agreements – including the Iran nuclear deal with world powers that the US unilaterally withdrew from in 2018 under former President Donald Trump, says Sokolski.

If the IAEA were to lower its SQ values, “it would have to increase the frequency of its nuclear inspections”, said Sokolski, noting this would be expensive and face resistance “by more than a few states that already chafe at being inspected as frequently as they are”.

Concerns about the IAEA’s SQ values date back decades.

Thomas Cochran is a retired nuclear physicist and former director of the nuclear programme at the US-based non-profit the Natural Resources Defense Council. In 1995, he co-authored a report that called the IAEA’s SQ values “technically indefensible” – a conclusion premised on how weapons designs had advanced since WWII to amplify the explosive yield of nuclear arms using less fissile material, as well as the availability of that technology to non-nuclear powers in “unclassified literature”.

At the time, Cochran argued that the IAEA should lower its SQ values by a factor of eight for plutonium and slightly less for highly enriched uranium – a view he still holds today.

“The SQ values have been obsolete for 70 years or so,” he told Al Jazeera. “In the last 75 years, people have gotten smarter about making nuclear weapons.”

When asked why the IAEA has not lowered its SQ thresholds in over four decades, the agency’s head of media, Fredrik Dahl, told Al Jazeera via email: “Although the SQ values have not changed, the safeguards measures and approaches implemented by the IAEA under a Comprehensive Safeguards Agreement (CSA), and an Additional Protocol (AP) where applicable, enable it to timely detect diversion of smaller amounts of nuclear material, i.e. less than 1 SQ, and deter such diversion by the risk of early detection.”

But Sokolski points out that Iran “has not yet acceded to the Additional Protocol”, which allows for supplementary verification tools to a safeguards agreement.

“But it’s worse than that,” he added, because the Iran nuclear deal was “designed and sold” on the premise that it would prevent the diversion of a weapon’s worth of nuclear materials “in anything less than a year”.

“If the agency is serious about preventing the diversion of a weapon’s worth of plutonium or highly enriched uranium, it needs to be honest about what those amounts actually are,” said Sokolski. “To know and truly be watchdogs, the IAEA has to own up to the honest figures. There’s no dancing around this.”

In addition to resurfacing the issue of SQ values, NPEC commissioned MIT graduate and research analyst Eva Lisowski to simulate what would happen if a “relatively crude, small” one-kilotonne nuclear implosion device – the most common design for a nuclear fission weapon – were detonated at ground level in five Middle East cities.

Such a device could be built with only 3kg of plutonium or 8kg of highly enriched uranium, says the report – far below the IAEA’s SQ levels.

NPEC choose Middle Eastern population centres for its case study because “in the last 36 months, political leaders in Iran, Turkey and Saudi Arabia have all publicly suggested their countries might acquire nuclear weapons”, said Sokolski. “This is unprecedented.” 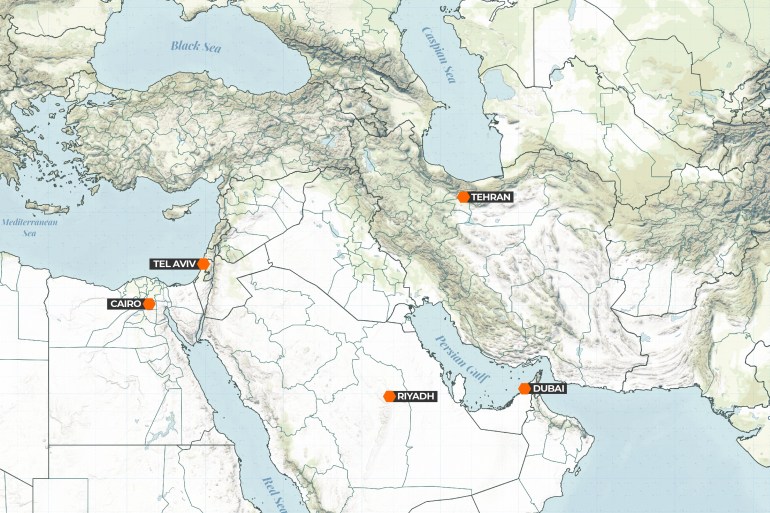 The five cities include Cairo, Tel Aviv, Tehran, Riyadh and Dubai and were selected because they are among the most densely populated in the Middle East, and located “in countries having some of the region’s most prominent military forces that each have used in regional military conflicts over the last half-century,” said Sokolski.

Two separate simulations were run for each city to yield dead and wounded estimates depending on whether the majority of the population were shielded and indoors at the time of attack, versus outdoors and unshielded.

The model also considered only so-called “prompt” radiation and fallout effects. It does not factor in increased cancer risk resulting from radiation exposure.

The simulation found that the destructive power of a one-kilotonne (1-kt) nuclear bomb detonated at surface level matched or exceeded the carnage resulting from the bomb dropped on Nagasaki, Japan. 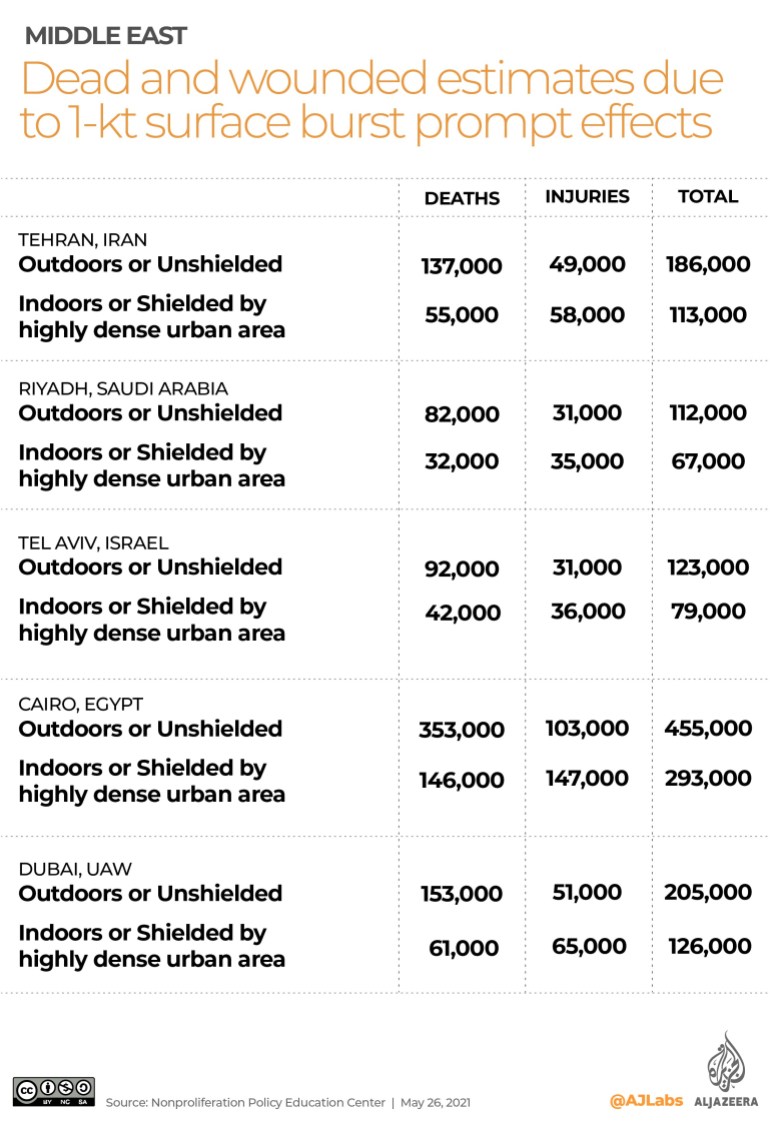 The report also delves into test cases illustrating how the number of dead and wounded could sharply increase due to nuclear fallout depending on weather conditions immediately following an attack.

While the bomb dropped by the US on Nagasaki in 1945 was a much larger 20-kilotonne device, it was detonated at 488m (1,600 feet) in order to maximise the blast effects to destroy buildings.

NPEC’s report seeks to demonstrate that “if you set off a 1-kiloton nuclear explosive at ground level rather than at the altitude the 20-kt Nagasaki bomb was detonated at (i.e, at ~1,600 feet), you can kill roughly as many people with prompted radiation and fallout,” said Sokolski. “This, at a minimum, suggests the IAEA would do well to reduce its significant quantities by more than one half and to make its inspections at least twice as frequent.”