Singapore’s economy has expanded more than first thought in the first quarter and the government maintained its growth forecast for the year but struck a cautious note about recovery due to uncertainties from the COVID-19 pandemic.

Gross domestic product (GDP) grew 1.3 percent year-on-year in the first quarter, the Ministry of Trade and Industry (MTI) said on Tuesday, higher than the 0.2 percent growth seen in the government’s advance estimate.

Manufacturing, finance and insurance and wholesale trade supported the expansion over the quarter. Analysts had expected a 0.9 percent increase, according to a Reuters poll.

MTI maintained its GDP growth forecast for 2021 at 4 percent to 6 percent for now but warned of a larger-than-usual degree of uncertainty caused by the pandemic as well as new domestic curbs against the virus. The outlook will be reviewed in August.

Authorities had last month said growth could exceed the upper end of the forecast range, recovering from the recession induced by the COVID-19 pandemic in 2020, its worst on record.

While it is possible that the Singapore economy will outperform the growth forecast for 2021 if external demand exceeds expectations, there are also significant downside risks, said Gabriel Lim, the permanent secretary for trade and industry.

“The pace of recovery of the various sectors of the economy is likely to be more uneven than earlier expected,” he said.

On a quarter-on-quarter seasonally adjusted basis, the economy expanded 3.1 percent in the first quarter. 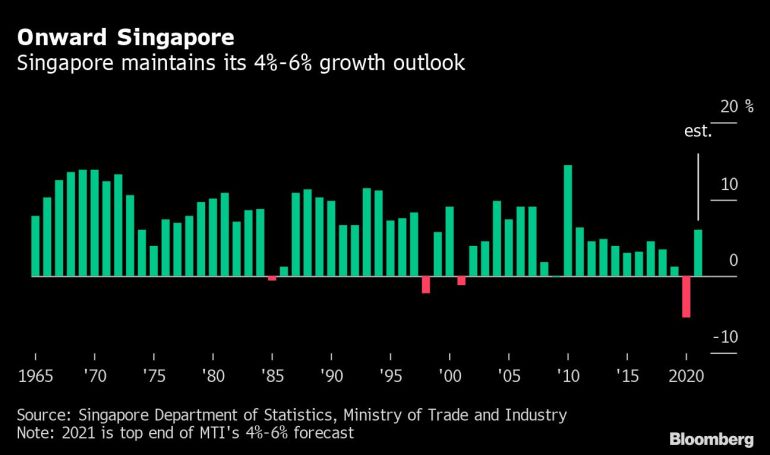 The city-state is often seen as a bellwether for global growth as international trade dwarfs its domestic economy.

The government has pumped more than 100 billion Singapore dollars ($75.34bn) into the economy to cope with the fallout. The central bank maintained its accommodative monetary policy at its last meeting in April.

“The accommodative, supportive impulse from both fiscal and monetary policy continues to flow through the system,” said Edward Robinson, the deputy managing director of the Monetary Authority of Singapore (MAS).

He said the policy stance remained appropriate and the MAS would review policy in October, as scheduled.

The central bank will consider factors that may affect “inflation dynamics, as well as considerations of growth,” he said.

Singapore this month reimposed some restrictions on social gatherings, the toughest since exiting a lockdown last year, to combat a recent spike in local COVID-19 infections, including banning dining-in, limiting social gatherings and urging a return to work-from-home.

The rise in cases – linked to a more virulent and unpredictable strain of the virus that first surfaced in India – has also meant a tightening of borders. Prestigious events such as the annual Shangri-La Dialogue, set for next month and the World Economic Forum in August, were cancelled.

“A lot of the exuberance we had in the first quarter, that’s kind of being rolled back a little bit,” said Selena Ling the head of treasury research and strategy at OCBC Bank.