Bitcoin traded lower on Tuesday as prices pulled back from a double-digit percentage rally, stoked in part by Elon Musk’s effort to bolster the token’s green credentials on Twitter.

The largest digital currency slipped as much as 6.5% to $36,494 in New York, following a 16% jump on Monday. The wider Bloomberg Galaxy Crypto Index and tokens including Ether also dropped.

The Tesla Inc. CEO has roiled the token’s price this month, triggering a selloff by criticizing its energy profile and suspending Bitcoin payments. Heightened regulatory rhetoric on cryptocurrencies from China also pressured the sector. 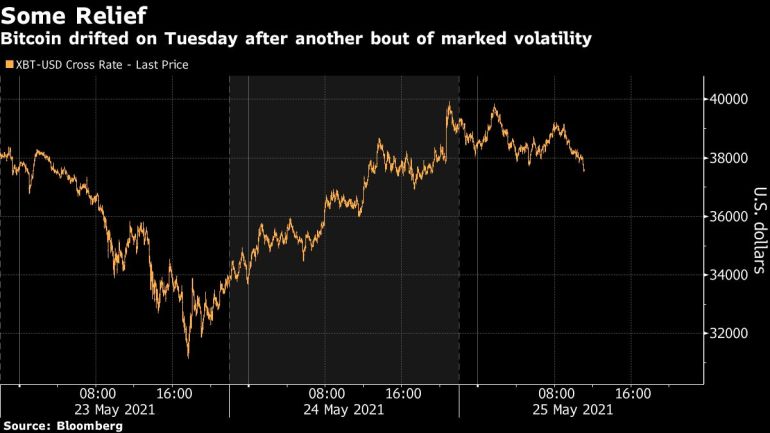 “If the market continues to see wild swings based on Elon Musk tweets, it’s going to be a big set back for this asset class,” said Matt Maley, chief market strategist for Miller Tabak + Co. “The fact that it sees such wild swings to the tweets from one person takes away the legitimacy of the asset class.”

Pledges to make the industry more green have picked up since Musk’s criticisms. Several miners joined the Crypto Climate Accord, a private-sector initiative to decarbonize the crypto industry by 2030. 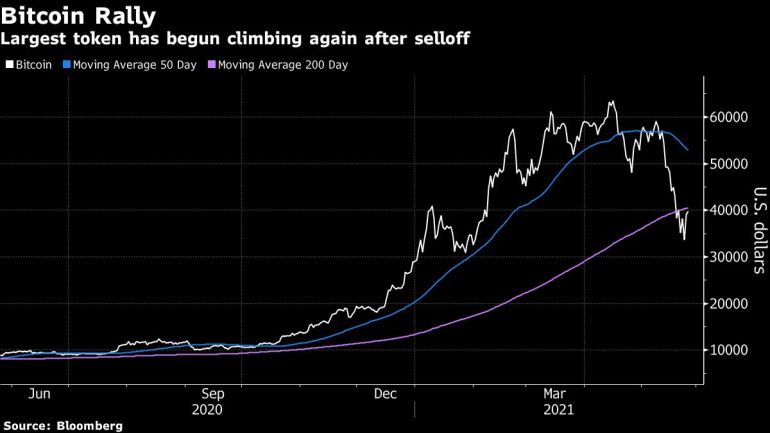 At the same time, it will take years for many of the largest miners to recalibrate where they source their energy.

Bitcoin’s heavy use of power fired by polluting fossil fuels is a long-standing problem. Miners use hundreds of computers that run around the clock to verify Bitcoin transactions in exchange for new coins.

Despite that, Musk in February plowed $1.5 billion of Tesla’s corporate cash into the token and said the electric-vehicle maker would accept it as payment for vehicles, before rescinding the latter decision earlier in May.

While the billionaire has since said he strongly believes in cryptocurrencies as long as they don’t drive a massive increase in fossil fuel use, digital tokens are still nursing losses from his spate of comments.

A measure of implied volatility on Bitcoin comparable to the U.S. equity market’s VIX indicator sits at 129, higher than the stock version has ever reached in 30 years.