Bitcoin is heading into the weekend in freefall again after a fresh warning from Chinese officials over cracking down on cryptocurrencies.

The latest blow came when China’s State Council reiterated its call to curtail Bitcoin mining and trading. The crypto market was already rattled earlier in the week by forced selling and possible U.S. tax consequences.

Friday’s selloff hit Bitcoin believers still fuming after onetime proponent Elon Musk did an about-face and criticized the token for its energy usage. Bitcoin is down about 25% since last Friday, though it’s up from a Wednesday plunge to as low as $30,000. Other coins have slumped too — Ether is down about 38% over the past seven sessions.

The sour stretch started with Musk suspending acceptance of Bitcoin payments at Tesla Inc. and trading barbs with boosters of the cryptocurrency on Twitter. China’s central bank added to the downdraft Tuesday with a statement warning against using virtual currencies. On Thursday, it emerged the U.S. may require crypto transactions of $10,000 or more to be reported to tax authorities.

China has long expressed displeasure with the anonymity provided by Bitcoin and other crypto tokens, and warned earlier that financial institutions weren’t allowed to accept it for payment. The country is home to a large concentration of the world’s crypto miners, who require massive amounts of power and thus run afoul of the nation’s efforts to curb greenhouse-gas emissions.

“The new guidance issued from the regulatory agencies — they’re taking it more seriously, they want more enforcement,” Bobby Lee, founder and chief executive officer of crypto storage provider Ballet, said in an interview Friday. “There’s talk about going after miners. The question is, can they catch all the miners.” 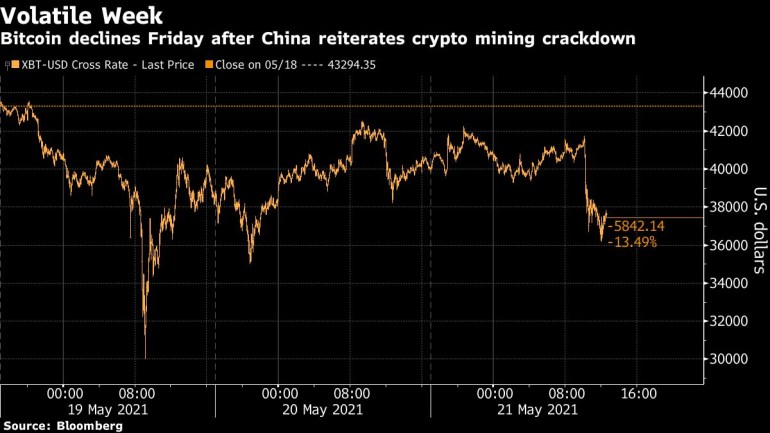 China’s moves this week highlight the country’s continued desire to seek control over the notoriously volatile asset class. It’s something China would rather see regulated by the People’s Bank of China, market-watchers say.

“It’s not really the mining issue that is the problem,” said Matt Maley, chief market strategist for Miller Tabak + Co. “They say they’re doing this as part of an effort to control risk-taking in their markets, but it’s really a signal that China is not going to be a big market for cryptos unless it’s a PBOC-controlled one.”

In the meantime, volatility in Bitcoin is likely to stay elevated. The selloff Friday once again pushed Bitcoin below its average price over the past 200 days, which to some chartists and technical analysts suggests it could trend lower still to around $30,000, where it found support earlier this week. 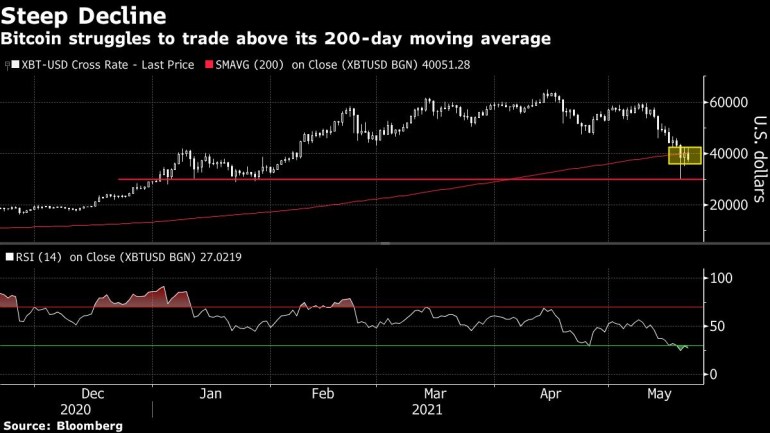 This week’s swings have led to huge liquidations by leveraged investors and damaged the narrative that cryptocurrencies will become more stable as the sector matures. Musk’s actions showed how just a few tweets can still upend the entire market. But even moreso, the past few days have renewed the regulatory threat on the crypto market.

“Investors are underestimating the regulatory risk of crypto as governments defend their lucrative monopolies over currency,” said Jay Hatfield, chief executive officer of Infrastructure Capital Advisors in New York. In the U.S., the possible imposition of transaction reporting requirements could be the “tip of the iceberg” of potential Treasury rules on virtual currencies, he said.

As far as regulations in China go, it may be a game of wait and see.

“You must always proceed cautiously with China — never get too bullish or bearish,” said David Tawil, president of ProChain Capital. “We’ll have to see what the regulation brings. It’s one thing to say, it’s another to do.”