Oil slumped to the lowest in nearly a month as traders focused on the likelihood of a renewed nuclear deal with Iran and the potential removal of sanctions on the country’s crude exports.

Futures fell 2.1% in New York on Thursday, posting a third straight decline in the longest losing streak since March. Iran’s President Hassan Rouhani said world powers have accepted that major sanctions on his country will be lifted. But he said diplomats are still discussing “details and finer points” before there’s “a final agreement.”

The prospect of a return of Iranian supply is also being reflected in Brent’s prompt timespread. The spread’s backwardation narrowed to just a few cents, a sign that market tightness may be easing.

Oil is “in a holding pattern until we get to June, because that’s when Europe’s going to start to reopen and the U.S. driving season will have officially kicked off,” said Jay Hatfield, CEO of Infrastructure Capital Management. “Between now and then, the main influences will be Iran headlines as a headwind” and signs of further improvement in the U.S. market as a supportive factor. 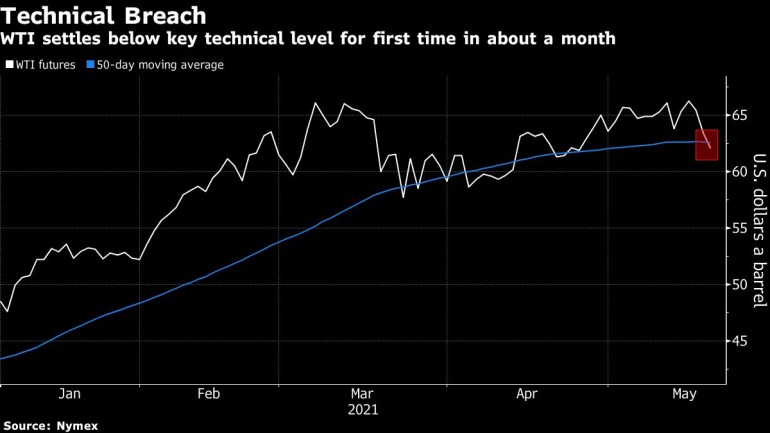 Crude futures’ tumble pushed the benchmark to close below its 50-day moving average for the first time since late April, a bearish signal that may invite more sellers into the market. While a timeline for a revival of the 2015 nuclear deal remains unclear, Iran has already been boosting its exports and Indian refiners have signaled they would be willing buyers.

India’s largest refiner said it will definitely restart buying Iranian oil when U.S. sanctions are lifted, and Hindustan Petroleum Corp. said Iran has been offering the nation’s refiners discounts on crude oil and expects these terms to be available after sanctions are withdrawn.

“There continue to be positive statements out of Vienna from various participants, including Iran, that a deal is at hand,” said John Kilduff, a partner at Again Capital LLC. “Even though we know they have already been ramping up their exports, it is adding to negative market sentiment.” 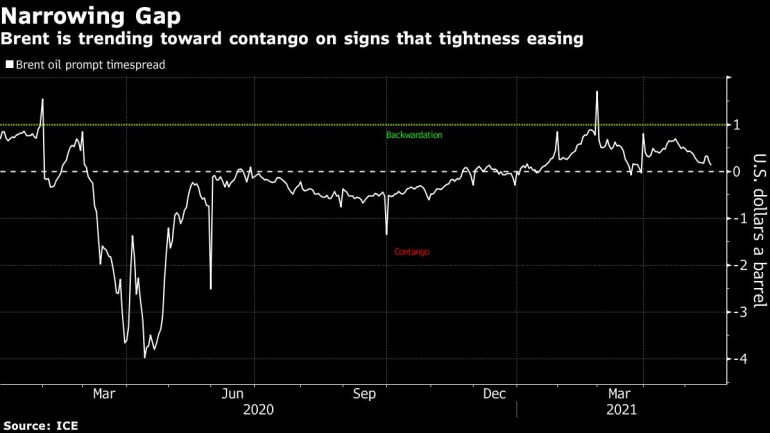 Enrique Mora, the EU official in charge of coordinating diplomacy in Vienna for the nuclear talks, said he expects all parties to return to the 2015 agreement before Iran’s presidential elections on June 18. Citigroup Inc. sees an initial 500,000-barrel-a-day increase in supply from around the middle of the third quarter.

Meanwhile, volatility is creeping back into the market after a choppy week in which global benchmark futures swung in a roughly $5 range after topping $70 a barrel. A measure of market volatility is at the highest since early April.

Commodity trading advisors “have likely been net ‘sellers’ in oil futures this week, lightening up their net ‘long’ oil exposure as both volatility increases and short-term momentum turns bearish,” said Ryan Fitzmaurice, commodities strategist at Rabobank. “On a weighted basis, CTAs remain a sizable net ‘long’ in oil futures, but this is the first time in months that we have seen a bullish signal turn bearish, which is notable, especially in light of the recent Iran nuclear developments.”

OPEC believes the recent IEA recommendation to avoid investment in new oil and gas projects “could be the source of potential instability in oil markets if followed by some investors,” according to internal document seen by Bloomberg.

In parts of Europe, highways are getting as busy as they were before the pandemic, offering a boost to the region’s oil demand.
China’s Shenghong Group expects to start feeding crude into a new mega refining complex in Jiangsu this August.

BP Plc has started a recruitment campaign for the people who will drive its expanding clean energy ambitions.