Japan’s economy shrank more than expected in the first quarter as a slow vaccine rollout and new COVID-19 infections hit consumer spending, raising fears of the country heading towards a double-dip recession.

The economy shrank an annualised 5.1 percent in the first quarter, more than the forecast 4.6 percent contraction and following an 11.6 percent jump in the previous quarter, government data showed on Tuesday.

The decline was mainly due to a 1.4 percent drop in private consumption as state of emergency curbs to combat the pandemic kept residents at home and hit spending for clothing and dining out.

Capital expenditure also fell unexpectedly and export growth slowed sharply, a sign the world’s third-largest economy is struggling for drivers to pull it out of the doldrums.

The dismal reading and extended state of emergency curbs have heightened the risk Japan may shrink again in the current quarter and slide back to recession, defined as two straight quarters of recession, some analysts say.

As Prime Minister Yoshihide Suga’s administration struggles to speed up its vaccine rollout and contain virus cases using a predetermined approach that attempts to limit damage to the economy, it last week added three more prefectures to the latest state of emergency, putting about half of the economy under restrictions that are slightly tighter than the ones in winter. Restaurants and bars in many big cities are now being asked to refrain from serving alcohol in addition to closing early. 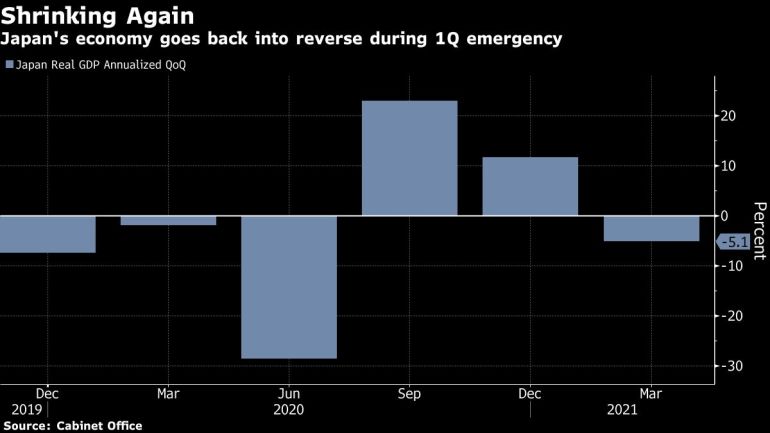 Failure to end the restrictions at the end of May, as planned, could also increase concerns over the staging of the Tokyo Olympics. Cancellation of the Games would deal another blow to the economy and raise the likelihood that Suga will be consigned to a long list of short-lived premiers. The country is set to hold national elections by early autumn.

The bigger-than-expected contraction also reflected a surprise 1.4 percent drop in capital expenditure as companies scaled back spending on equipment for machinery and cars, confounding market expectations of a 1.1 percent increase.

While exports grew 2.3 percent thanks to a rebound in global demand for cars and electronics, the pace of increase slowed sharply from the previous quarter’s 11.7 percent gain, a worrying sign for an economy still reeling from weak domestic demand.

“That domestic demand is weak shows the adverse effects from the coronavirus haven’t been shaken off at all,” said Takeshi Minami, the chief economist at Norinchukin Research Institute.

Despite a substantial monetary and fiscal stimulus, Japan’s economy slumped a record 4.6 percent in the fiscal year that ended in March, the data showed.

“There will undoubtedly be fiscal money poured on this problem to soften the blow, though after so much already, it is difficult to see this having more than a fairly marginal effect,” analysts at ING wrote in a research note, adding they expect the economy to shrink again in the current quarter. “And the Bank of Japan seems to be out of fresh policy stimulus ideas currently, so we don’t anticipate anything new from them apart from extending existing measures.”

Economy Minister Yasutoshi Nishimura blamed the weak GDP reading mainly on the curbs to combat the pandemic, adding the economy still had “potential” to recover.

“It’s true service spending will likely remain under pressure in April-June. But exports and output will benefit from a recovery in overseas growth,” he told reporters.

Japan’s economy expanded for two straight quarters after its worst post-war slump in April-June last year due to the initial hit from the pandemic.