China’s economy has slackened in April from the jump seen in the previous month as factory output slowed and retail sales missed analyst expectations, indicating more pressure on the recovery in consumption.

Industrial production grew 9.8 percent in April from a year ago, slower than the 14.1 percent surge in March, National Bureau of Statistics (NBS) data showed on Monday but matching a consensus forecast by analysts from a Reuters poll.

China’s gross domestic product (GDP) expanded by a record 18.3 percent in the first quarter and many economists expect growth will exceed 8 percent this year.

China’s economy showed a steady improvement in April but new problems are also emerging, said Fu Linghui, an NBS spokesman, at a news briefing in Beijing on Monday. “The foundations for the domestic economic recovery are not yet secure,” he said.

China’s surging growth figures in the first months of the year were boosted by the low comparison with an economy paralysed by COVID-19 in the same period a year before.

Retail sales rose 17.7 percent year-on-year in April, much weaker than a 24.9 percent uptick expected by analysts and down from the jump of 34.2 percent seen in March. 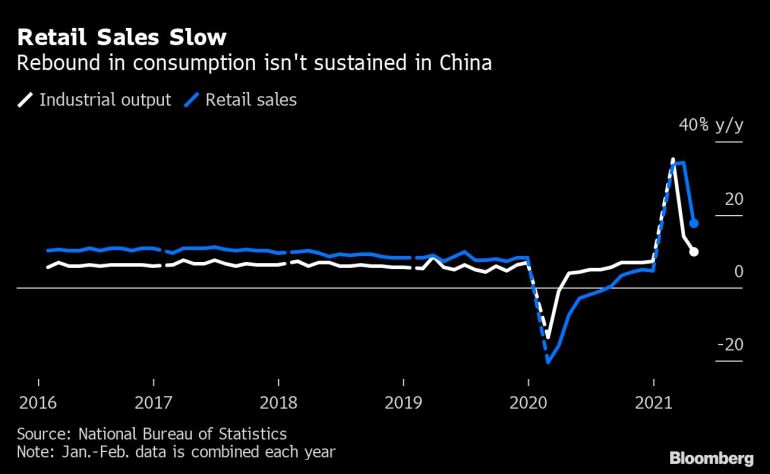 Growth in sales of home appliances dropped particularly sharply in April from the month before, falling from 38.9 percent growth on year in March to 6.1 percent, NBS data showed.

Fixed-asset investment, or investment in factories and machinery, increased 19.9 percent in the first four months from the same period a year earlier, versus a forecast 19 percent rise, slowing from January-March’s 25.6 percent increase.

Private-sector fixed-asset investment, which makes up approximately 60 percent of total investment, rose 21 percent in January-April, compared with a 26 percent jump for the first three months.

Asian share markets were mixed on Monday after the data was released.

A top decision-making body of the ruling Communist Party said last month the country will encourage manufacturing and private investment to recover as quickly as possible.

The Politburo meeting chaired by President Xi Jinping also warned China’s economic recovery remained uneven and that its foundation was not yet solid.

Exports unexpectedly accelerated in April and import growth hit a 10-year high, thanks to strong demand for Chinese goods amid a brisk US economic recovery and stalled factory production in other countries.

Authorities have pledged a gradual scaling back of the monetary and fiscal stimulus pumped into the economy last year, with no sharp turn in policy. Recent data shows a notable slowdown in credit in April, suggesting the exit might be materialising at a faster-than-expected pace. The central bank injected medium-term cash into the financial system Monday to match the amount falling due, a move largely expected by analysts.